It seems that every other post seems to be a memorial to a local member passing. And so, it is with great sadness I do this again and write about the death of Bob Steel.
Bob, also known as Rob, was the former Chair of Sutton and Croydon Green Green Party.
He died in mid-August at his home in Wiltshire. Local members last month planned to meet for a socially distanced walk on 22nd November (today) to remember him.
However, owing to the new lockdown, this has not been possible. It seems appropriate to write about him today. Gay McDonagh, second from right [see pic], has written a beautiful Green Party-centric obituary about Bob which I'll post later.
The photo in the post was taken at the Carshalton Environmental Fair. I've got my first child in a baby carrier. Bob once said to me that having children marks the end of activism. He was right! Since 2012, I haven't been as active!!
Bob had a number of convictions, STEELISMS, if you will, that were founded on life experiences and knowledge. I will try and remember some of them here because they were all pretty accurate.
When I joined the Green Party in 2002, there was no active Croydon party. Instead it was conjoined to the Sutton Green Party. I think the first voice I heard when joining the Green Party was Bob Steel's landline answerphone message. The greeting listed organisations he was Chair/Organiser. From memory, these were the regional CAMRA group, a walking group, as well as the local Green Party. He had his finger in many inter-connected pies.
He had written books on real ale pubs and pub walks. This was before real ale had become the essential hipster refreshment. He knew his real ale. It was through his influence I ventured from Heineken to Hophead. I remember mentioning to Bob I had bought a few cans of Tangle Foot - my gateway ale. He wasn't impressed and pointed out that it would be good for the slugs. Whatever knowledge deficiencies I possessed on beers was easily surpassed by the subject of gardening.  His comment just went over my head!
On one occasion, we went for lunch in Brighton during Green Party conference. I remember wandering the streets with Bob for while in order for him to find the ideal pub. He pretty much knew every CAMRA pub in the country. I think it might have been my first Green Party conference. It was new and exciting for me, but for Bob it was almost the polar opposite. I remember him trying to get across to me what Green Party conferences were like in the 80s. Imagine enlightened people from all over the country coming together to discuss a new ideology. "Green Party conferences are just not the same [STEELISM]".
Bob was a fast walker - which is useful if you like pub walks. In 2004 I won the selection process to become the GLA candidate for Croydon and Sutton. I remember him encouraging me to put my name forward when I asked him for his thoughts about standing. He came over from Carshalton to leaflet in my campaigns in Croydon on a number of occasions, usually cycling over or borrowing Gay's car. On one particular morning it was freezing cold but the sun was out. It was just about bearable for me. I assumed everyone preferred hot weather, but not Bob. He was in his element. He was not a big fan of warm weather. "The best weather is cold and sunny [STEELISM]."
When not talking about Green Party stuff, we could easily be sidetracked by football, especially non-league football. He was a well known Carshalton Athletic fan. From about 2006 onwards I had started watching Croydon Athletic so there was some crossover. He loved Carshalton Athletic. He loved the rivalry with Sutton United who he referred to as the Scummers. Croydon were always at least one division below Carshalton but then for one season, Croydon benefitted from a "Sugar Daddy" [STEELISM] - a wealthy benefactor - and The Rams caught up with The Robins, which meant for once, and for only once, we were at the same match. By then Carshalton had invested in an artificial pitch, something Bob was dead set against - not a surprise given he was a purist when it came to football. I've spotted that The Robins are aware of his passing. 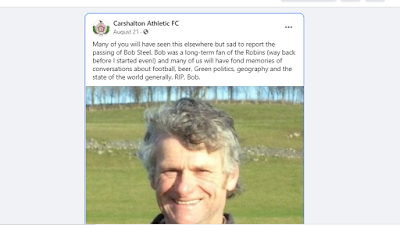 Bob was an excellent chess player as well. I play too. Sadly, the opportunity to play each other was limited again to one occasion. For my 40th birthday I hosted a chess tournament for my friends. Weird I know. A couple of genuine chess players couldn't make it, including Bob, so I organised another tournament a few months later. Bob thrashed us all. 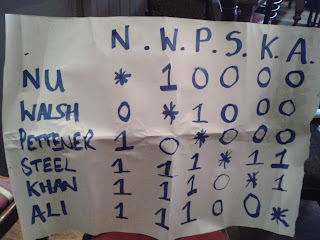 I think Bob played one of the top boards at Southampton University when he was a student. He once mentioned winning a crucial match with a pretty combination of moves that resulted in his university team winning the Southampton League. I remember observing to him that chess players tended to vote Green. It was an idea that had not escaped him, "Chess players are like Green voters, they think things through. [STEELISM]"
By the time I had joined the Green Party, Bob had already done many years of hard service, including targeting Carshalton Central ward. In my early years, I was bright eyed and bushy tailed. I believed it was possible for Greens to win council seats under the first past the post system in Croydon and Sutton, and couldn't understand why Bob - the Chair - didn't feel as enthusiastic as I did. It was only after doing my years of hard service do I appreciate one of Bob's other STEELISMs, "Slow down Shasha, you're in this for the long haul." Greens can get elected under the first past the post but one has to bust a gut to do it, but then many bust a gut and don't make it. Through hindsight it may be better to play for the long haul.
Sadly, Bob's haul has been cut short. He has touched the lives of many people, including me. He was always there whenever I needed advice, be it on the wording of a letter, a press release, or even electoral strategy. A man of great intellect has left us, may he rest in peace.
Bob is survived by his wife and stepdaughter.
-------------------------------------------------- Tags croydon, greenparty
Posted by Shasha Khan at 10:25 pm