As part of a national day of protest local Greens joined others outside Stephenson House. Ironically, one end of Stephenson House is a gym and the entrance is signposted with the words Fitness Club (above), and fitness (to work) is ATOS' raison d'etre..

There is a strange thing about the psychology of this country is that people intrinsically focus on those that appear to be getting away with it who are below them on the income scale, rather than the economic and political elite above them who have become even richer thanks to policies under Labour and Tories.

The solution is a Citizens Income (CI). Everyone should be given a weekly or monthly income as of right that is unconditional and unrecoverable, that allows them to enjoy at least a modest standard of living. We already have similar universal benefit - child benefit. CI could be easily started, at no extra cost, by scrapping personal income tax allowance and tax credits. The benefits to society are numerous. I found a good account of CI here.

There were some imaginative posters and placards including the one below which is the perimeter boarding of a building site further down Cherry Orchard Road. 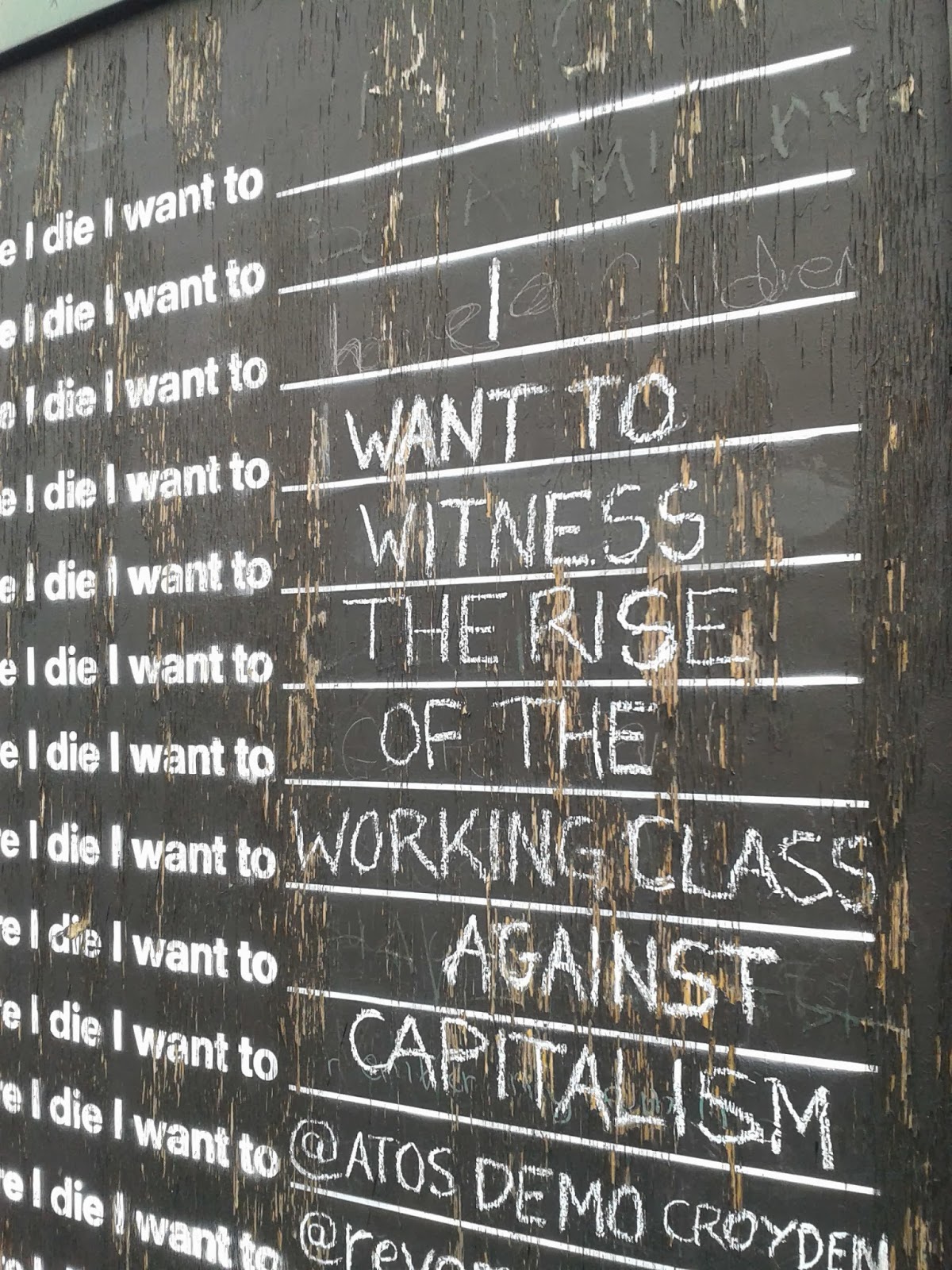 I think many went up to ATOS hq in central London because the Croydon protest was thin on the ground. Definitely more police than protesters. Those that were in attendance had a leftist slant it could be said!

I met Dave Plummer from Lewisham Green Party at the protest and he produced this rather fine video.

The UK’s response to the flooding crisis must centre on a long-term strategy to address climate change the Green Party says today, as it recommends a series of ten measures (1) to improve the country’s flood resilience in future.
It says sustained political action on climate change is crucial to reducing the risk of severe flooding happening again.
The Party is calling for Environment Secretary Owen Paterson to be sacked and for the Prime Minister to remove Cabinet Ministers and senior government officials who refuse to accept the scientific consensus on climate change. The Met Office (2) has said that the evidence points to climate change contributing to these extraordinary floods.

Tracey, Hague, co-leader of the Croydon Green Party, said:
“These floods, which have left cars submerged and homes evacuated in Kenley, bring into focus the devastating risk of inaction on climate change.
We need to do all we can right now to help those affected by flooding, including applying to the EU for extra financial help. In the longer term we must reverse staff cuts at the environment agency and strengthen planning rules to prevent further development on flood plains.”

The Green Party’s ten point plan on flooding includes:
1. Reverse staff cuts at the Environment Agency, review its budget, and drop plans to impose a duty on the EA to consider economic growth which could get in the way of providing independent expert advice
2. Strengthen planning rules for urban and rural areas to prevent further development on flood plains and ensure developers prioritise flood resilience and prevention – including through incorporation of SUDS in new developments as well as a programme of retrofitting SUDS to existing communities. Ensure better transparency of decisions so public can hold decision makers accountable.
3. Get rid of any cabinet Ministers or senior governmental advisors who refuse to accept the scientific consensus on climate change or who won’t take the risks to the UK seriously

Natalie Bennett, Green Party Leader, said:
“Politicians who ride roughshod over the painstaking findings of climate scientists (3), sometimes motivated by their inappropriately close links to fossil fuel big business, endanger our future and our children’s future”
“It’s a crying shame more of the recommendations made by the The Pitt Review into the 2007 floods (4) haven’t been taken seriously by Labour, the Tories, and their Coalition government lackeys in the Lib Dem Party. But it is not too late for action.”

Caroline Lucas, the Green Party MP for Brighton Pavilion, said:
“Across the country, homes and businesses are being devastated by the floods, and our hearts go out to everyone whose life is being turned upside down. Nature is giving us another wake-up call.
“In addition to making sure everything possible is done to help people affected by the immediate crisis, we need a credible long term strategy to tackle the risk of flooding and extreme weather to people’s homes and livelihoods in the future.”
The call to government urges ministers to adopt the recommendations of a major independent cross sector coalition for a Cabinet-level committee on infrastructure and climate change resilience and a Royal Commission on the long-term impacts of climate change on land.
The Green Party is also calling for all staff cuts at the Environment Agency to be cancelled, planning rules to be strengthened to prevent further development on flood plains, and for increased levels of spending on flood defences to a level in line with expert recommendations from the Environment Agency and the Climate Change Committee.
And it is supporting the call of campaigners for the billions of UK fossil fuel subsidies and tax breaks to be used to help the victims of flooding
“This redirection will address the underspend and assist the victims of flooding, as well as putting a halt to public money exacerbating the problem of climate change that is making the floods so much worse”, noted Bennett.
ENDS
1)     http://www.keithtaylormep.org.uk/wp-content/uploads/Flooding-10-points-_embargoed-14-Feb_.pdf

Posted by Shasha Khan at 6:43 am No comments:

DRUGS POLICY press release has just come through from HQ

Caroline Lucas – we’ve achieved a major step towards a humane drugs policy
Brighton Pavilion MP’s petition for a review of drug laws reaches 100,000 signatures
For immediate release: Thursday 13 February, 2014
The Green MP Caroline Lucas today hailed a major step towards a humane,  evidence-based drugs policy as her petition for a review of drug laws reached the 100,000 mark.
With support from tens of thousands of people across the country, including Russell Brand, Richard Branson, drug policy experts, and the campaign community Avaaz, the petition hit 100,000 signatures this morning.  This means that Lucas’ call for an independent assessment of the 1971 Misuse of Drugs Act will be debated in Parliament.
Caroline Lucas, MP for Brighton Pavilion, said:
“The Misuse of Drugs Act is hopelessly out of date.  It has never been reviewed, or undergone a cost-benefit analysis.  In England and Wales alone, an estimated £3billion a year is spent fighting the war on drugs, to little effect.  Over half of the people in prison are thought to have serious drug problems, and yet we continue to fail to treat drug addiction as the serious health problem it is.
“I’m absolutely delighted that so many people have sent a clear message to the Government that we need a fresh approach. Today we have achieved an enormous step towards an evidence-based drugs strategy.”
View Caroline’s blog on the topic: http://www.huffingtonpost.co.uk/caroline-lucas/drug-law-policy_b_4767891.html?utm_hp_ref=uk&ir=UK
Notes to Editors
1)      View the E-petition here:  http://epetitions.direct.gov.uk/petitions/45969
2)      Facts and figures about the UK’s drug laws
The Costs of Drug Use
·         The most recent (for the year 2003/04) Home Office estimate of the annual social and economic cost of Class A drug use in England was £15.4 billion,[i]
·         The most recent Home Office research estimated that between a third and a half of all acquisitive crime is committed by offenders who use heroin, cocaine or crack cocaine. There are no equivalent figures for Class B and Class C drug use. [ii]
·         An estimated £4.036 billion of the cost of drug-related crime is the criminal justice costs of arresting, prosecuting and imprisoning drug users. [iii]
·         The remainder are ‘victim costs’ of crime It is estimated that fraud accounts for more than a third of Class A drug-related crime costs, totalling £4.888 billion. [iv]
·         Burglary accounts for more than a quarter of the cost at £4.07 billion followed by robbery at £2.467 billion and shoplifting at £1.197 billion.  The cost of drug-related arrests is £535 million [v]
·         The research by the Government into the total economic and social costs of drug use failed to include the cost of the drug strategy itself, which according to the 2002 drug strategy was £1.344 billion in 2003/04.  This budget was spent on prevention, enforcement of drugs laws and treatment [vi]
·         Therefore, the charitable think tank Transform estimates the total cost of Class A drug use (heroin and cocaine) under prohibition in England and Wales in 2003/04 was £16.785 billion.  [vii]
·         A 2013 study which evaluated the costs and benefits of introducing a licensed and regulated marijuana market in England and Wales concluded that the most plausible result of reforming marijuana’s legal status would be a net benefit of £100-£415 million and that, additionally, the tax intake would be £400-£900 million.[viii]
·         Over half of the people in prison are thought to have serious drug problems.[ix]
·         Rates of cannabis use by young people in Britain are amongst the highest in Europe.[x]
·         Across England and Wales, only around 7% of drug stop and searches end in arrest.  As a result of almost 550,000 stop and searches for drugs in 2009/10, only 40,000 people were arrested, wasting police time and resources [xi]
An Evidence Based Approach
·         There has never been an impact assessment of the 1971 Misuse of Drugs Act.
·         Nor has there been a cost benefit assessment, or any attempt to compare its effectiveness in reducing the societal, economic or health costs of drug misuse with alternatives, such as decriminalisation of drug use.
Decriminalisation
·         The legal status of drugs has little effect on people’s decision to use them, as research by the Journal of Substance Use has shown [xii]
·         An investigation by the drug charity Release in 2012 looked at 21 jurisdictions that had adopted some form of decriminalisation of drug possession.  Overwhelmingly, the research showed that such an approach does not lead to an increase in drug use and that, by not criminalising those who use drugs, there were improved outcomes in terms of employment and relationships, reduced stigma, and people were less likely to enter or re-enter the criminal justice system, creating significant financial savings [xiii]
·         The UN Office on Drugs and Crime admits that the war on drugs has had terrible ‘unintended’ consequences[xiv]