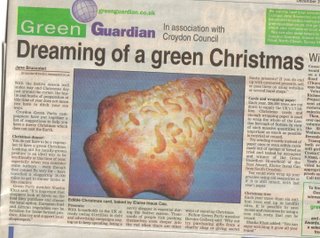 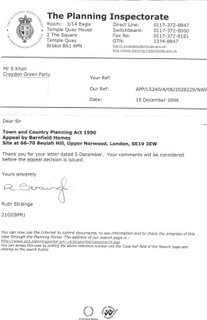 The proposed development on Beulah Hill is now in the hands of the Planning Inspectorate. We have submitted our arguments again. As soon as we hear anything, we will post up on the blog.

In response to I M Ball's letter (November 23). I'm afraid that sadly I am correct about the role of supermarkets in reducing variety and failing to support British growers.
It's an important issue since it affects the future of UK agriculture, and rather than being simply an armchair critic' I have taken a very active personal and academic interest in this over a long period.
The latest Friends of the Earth survey of UK apples in 181 supermarkets (2005, well-referenced and available online, Mr Ball) found the average number of apple varieties in supermarkets was 3.6, of which over half were foreign imports.
It's true that the percentage sourced from the UK is increasing in response to consumer demand, but sadly the damage has already been done: in 1970 MAFF recorded 62,200 hectares of orchards in the UK. This declined to 22,400 hectares in 1997. This is a 64 per cent decline in 27 years, and the loss continues, with a further 13 per cent loss in the two years 2000-2002 for example (DEFRA figures).
A 2004 Guardian report found "At least 60 per cent of all orchards were lost in the past 30 years largely because supermarkets preferred to buy just one or two varieties in bulk from France, the US and New Zealand."
In turn the supermarkets' demands on appearance and price have forced farmers out of business. Supermarkets reject significant amounts of fruit for cosmetic reasons, cancel orders at the last minute and have squeezed profit margins to almost zero for producers.
Small farmers will not replant orchards unless there is security of supply and the prospect of a return; supermarkets offer neither of these, since the grower has all the risk and the retailer takes most of the profit.
Mr Ball is right in one respect, that supermarkets are competitive on price: but that's also part of the problem, and why dairy, fruit and arable farmers are going out of business in larger numbers: the consumer's obsession with cheap food, fuelled by supermarket policies of sourcing from abroad, has driven the small UK farmer to the verge of extinction.
This is well documented and I'm surprised to be accused of getting this wrong. Only this week at the report on the drastic decline in the number of Welsh dairy farmers, blamed almost entirely on the inability of farmers to get a fair price for their milk from supermarkets.
We should be paying a fair price for our food and supporting British farmers in their stewardship of the countryside. Farmers have no security from big supermarket buyers who call all the shots and have no loyalty to their suppliers.
I invite your correspondent to look more closely at this issue- small farmers and small retailers need all the friends they can get.
Bob Steel
Chair
Sutton and Croydon Green Party 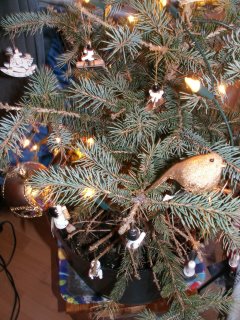 How to have a Green Christmas

Local Green Party campaigners have put together a list of suggestions in order to have a Merry Christmas which doesn’t cost the earth. Many environmentalists are becoming much more wary of how their actions contribute to global warming.

Christmas Dinner:
Turkeys can’t fly very far but some have travelled a staggering 30,000 miles to get to dinner tables in this country! Shasha Khan commented, “It is important that shoppers look at labels on the food they purchase and choose the local option. European fowl and African vegetables can be forsaken for home farmed produce. Also try and support local shopkeepers.”

Presents:
UK households already owe £1 trillion in debt. Thousands of people risk pushing themselves even deeper into the red. Bernice Golberg said, “Why not try purchasing gifts from a charity shop or giving Secret Santa presents. If you do end up with unwanted presents why not sell or pass them on using web sites or second hand shops.”

Cards and wrapping paper:
Each year, 200,000 trees are cut down to supply the UK’s 1.7 billion Christmas Cards and enough wrapping paper is used to wrap the whole of the London Borough of Sutton. In view of such massive quantities, it important that as much as possible is recycled or reused.

Christmas tree:
Each year over 6 million trees end up in land fill sites. It is possible to save money and resources by using a tree with roots that can be reused. Shasha Khan added, “You can enjoy watching it grow all year round.”

There are a several things that one can associate with the season of goodwill and the dawn of a new year: Christmas trees, the exchanging of presents, the queens speech, the NYE party and the inflation busting rail fare increase (Train fares leaping ahead of inflation rate yet again, December 06). Commuters using trains operated by Southern will continue to pay through the nose to travel like sardines. Some may be priced off the railways altogether. At a time when the governments Stern Report predicts catastrophic consequences if urgent action is not taken to reduce carbon emissions; greater use of budget airlines and higher levels of congestion on the roads will only increase pollution.
It is painfully obvious that a railway system that is privately owned is a tragedy for the commuter and the climate. 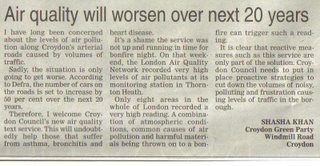