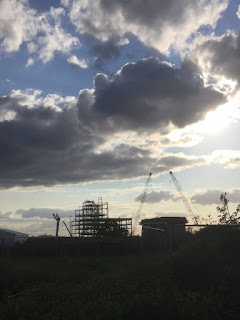 
Earlier this month we heard that Jim Clugston had sadly passed away.

Jim was a unique individual. He lived in New Addington, which is demographically speaking the area in Croydon you are least likely to find a Green party member. The fact that the British National Party has attracted significant support in New Addington indicated how it is the polar opposite of North Laine in Brighton, for example.

I recall he told me his next door neighbour had a BNP poster on his their window!

Jim had stood for council elections in New Addington and had been active for a number of years. He was always on hand to support the local party, whether it be leafleting, writing letters to the local paper or standing as a candidate. He was very much active in the local CND group and was one of the first to embrace the transition town concept in Croydon. He was also someone who would take the time to send me an email (to comment/credit) if he spotted something Green party related in the local paper.

This blog has some record of this Green party activity here, including how he generated power from scrap metal!

In recent times, due to a misunderstanding, this is how I would describe it, with regard to a social media post, Jim had decided to distanced himself from the Green party. I think those of us who observed the episode were quite frankly disappointed it ever happened. I remember my colleague Bernice Golberg pointing out it reinforced her view to stay clear of social media.

It is sad to think we won't see Jim again.

Lady Emily Benn is off to New York. This has triggered a by election. Greens have an excellent candidate: David Beall. He's the only candidate who lives in the ward. This has not gone unnoticed. 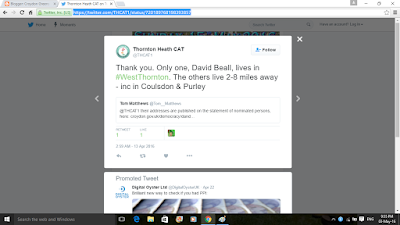 David and I have done a few bits of activism together over the years. The most famous one - which has nearly 7000 views - can be watched below. Mr Beall is Mr ANTI-ESSO MAN. Its not often you will see a candidate in his underwear...

Personal statement from David Beall.
My name is David Beall. I am 34 years of age and was born in Mayday Hospital and went to Gonville Primary School and the Archbishop Lanfranc School. I have lived in West Thornton ward since 1980. I am a qualified Mental Health Nurse and have been a community support worker before, during and after qualifying in the borough of Bromley.This will be the third time David will be standing in West Thornton ward. He stood in 2010 and in 2014. In 2014 he was the highest placed candidate who wasn't a Labour or Tory, finishing highest among the Greens and above the Lib Dem and UKIP candidates.