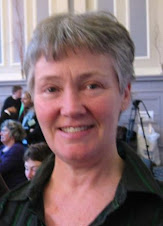 Shan Oakes has been selected as the Green Party's candidate standing against the Conservatives' David Davis for the seat of Haltemprice and Howden on July 10th 2008.

Any offers of campaigning help can be directed to Martin Dean at sokuto12 'at' sokuto12.karoo.co.uk

News that the Tories are mobilising their forces for a sustained attack on the four schools threatened with closure is to be expected. Leading from the front is trooper and former Tory candidate Tony Pearson disguised in parent governor garb. However, this trooper is not detached from his command. Moreover, he is being steered and led be senior Tories Cllrs Gatland and Barwell. If ever evidence was needed that a systematic underhand campaign was in place to rubbish Selsdon High, Addington High, Haling Manor and Westwood Language College to meet a preferred agenda, then revelations that Mr Pearson sought amendments and clearance from the Conservative hierarchy before submitting his letter to this paper is damning.
Yet, I for one am not surprised. Conservative party form indicates a history of running flawed consultations and mounting campaigns to misinform the parents on this issue of city academies. Evidence of a preferred agenda was on display when the cabinet committee deliberated for a mere 14 minutes Cllr Gatlands recommendation to close Coulsdon High School and reopen it as a city academy within seven months. Letters received that were opposed to the proposed academies were dismissed because they were perceived to be ideologically founded.
In reality, the fact that we have a Conservative party and a Labour party ideologically in favour of closing state schools and reopening them as privately funded city academies is threatening the quality of our boroughs education. Among the 70 councillors in town hall that are supposed to represent us, non are publically opposed to the concept because they all belong to the Conservative and Labour parties. This in turn means it is open season for city academies because no one is speaking out in council to raise concerns and objections and we get situations where city academy status can be rushed through.
In the case of Oasis Trust, the private sponsor selected to take over the public asset that is presently Coulsdon High school, what are the implications of that trust being funded by unnamed institutions and businesses. Only after some probing by yours truly at a public meeting did we discover that Oasis receives funding from the Indian government!! The Rev Steve Chalke founder of Oasis Trust declined to disclose any other donors.
If this council is under the impression that they can attack and destroy our state education system at will then they should be prepared for a vigorous defence from our party. 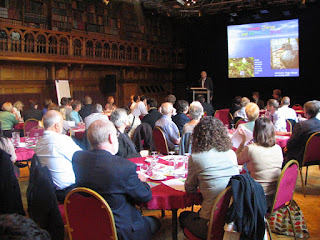 On 29th May the Sustainability Dept at Croydon Council invited representatives from, green organisations, schools, businesses, charities and council departments to discuss the idea of a Climate Change partnership for Croydon. Presently Islington operates such a scheme; which essentially is an opportunity for institutions, organisations and businesses to sign up to a voluntary scheme to reduce their carbon emissions. Full credit must go council officers Kia Colbeck and Anna Eltringham for putting on the event.

Tory MP Peter Ainsworth was one of the guest speakers. He naturally painted his party as the vanguard of the environment to which I had to put my hand up and ask him why the Conservatives had only adopted 3 out of 100 recommendations from Gummer and Goldsmiths, 'Quality of Life Agenda'. He replied that this was not true and that more would be adopted. We not holding our collective breaths.
--------------------------------------------------
Tags croydon, greenparty
Posted by Shasha Khan at 10:52 pm No comments: 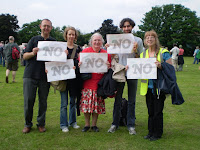 Chris Scibberas joined other local activists for Make a NOise!

Details of the event

Posted by Shasha Khan at 5:14 pm No comments: