Letter to the editor (Labour's greenwash)

I wonder if Labour’s Cllr Mansell noticed what was directly opposite her response to my letter on the floods in Croydon. Discerning readers of this paper would have seen that opposite her ‘greenwash’ ridden letter was an article highlighting Croydon Green Party’s Chris Sciberras peaceful visit to the Climate Camp at Heathrow airport.
The irony was overwhelming because it is her government that is backing airport expansion at Heathrow and other airports.

If Cllr Mansell is genuinely concerned about climate change then maybe she needs to start writing letters to her own party leader rather than the local paper. 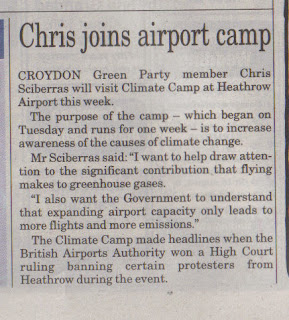 Labour on the defence regarding flood letters 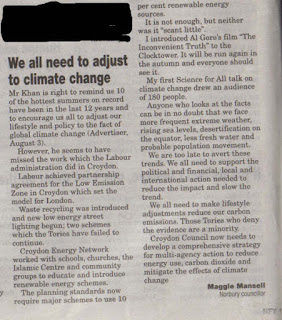 Letters on the floods in both local papers 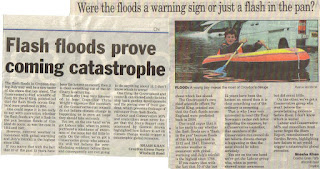 The purpose of the camp is to increase awareness of the causes of climate change – and one of the main ones is air travel.

Speaking before heading off to Heathrow Airport, Mr Sciberras said,

“I want to help draw attention to the significant contribution that flying makes to greenhouse gases. I also want the Government to understand that expanding airport capacity only leads to more flights and more emissions.”

However, the court refused BAA’s demands for an injunction of Airport Watch, an umbrella group for environmental and conservation groups, including the Woodland Trust, the Royal Society for the Protection of Birds and the Campaign to Protect Rural England.

Commenting on BAA’s demands for an injunction, Mr Sciberras said,

“I also want to protest against BAA's attempts to stop people exercising their democratic rights to protest peacefully.”

“We are becoming increasingly concerned about the attacks on people’s right to protest. BAA’s actions were completely unreasonable. Understandably, the focus of the Climate Camp is now as much about the right to protest as is it about climate change.”

The camp will explore grassroots solutions to climate change through workshops, skill-sharing, education, debate and entertainment.

Residents fuming over car-only rule from the Croydon Guardian

Croydon Green Party member Shasha Khan said he was "100 per cent" behind pedestrian and cycle access for people wishing to recycle.

He added: "It is ludicrous. It's another example of how the systems in place in Croydon are outdated for the present climate.

"People are much more in tune with green issues and environmental best practice and yet the system is stopping them." 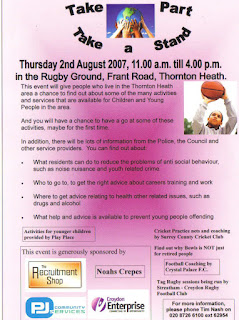 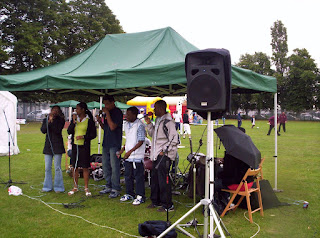 I attended the Take A Stand event in Thornton Heath earlier today. The purpose of the event was to give young people in the locality a chance to find out about some of the many activities and services that are available for them.
I spoke to a number of young peoples support groups at the event. These groups are reliant on Childrens Fund money from the council. It is important that these groups do receive adequate funding in March 2008 to continue their excellent work.
--------------------------------------------------
Tags croydon, greenparty
Posted by Shasha Khan at 4:48 pm No comments: