This year I really don’t feel like Christmas. I can’t bear the thought of being part if it. But I am socially obliged have grin and bear it, even to pretend I enjoy it, counting the minutes for this hypocritical feast to be over. The reason is that friends have emailed me two recent documents:
1) Feeding Britain: A strategy for zero hunger in England,
Wales, Scotland and Northern Ireland. The report of the All-Party. Parliamentary Inquiry into Hunger in the United Kingdom
And:
2) An Evidence Review for the All-Party Parliamentary Inquiry into Hunger in the United Kingdom. Compiled and written by Andrew Forsey, Secretary to the All-Party Parliamentary Inquiry into Hunger in the United Kingdom.
Document 2) is a summary of the evidence from which the conclusions and recommendations of document 1) are drawn. The findings in these reports are horrifying. The UK is still one of the richest countries on Earth and yet thousands of people, through no fault of their own and a great many in work, have to undergo the regular humiliation of asking for emergency food in charitable food banks. The reports make absolutely clear that in general the cause is poverty and living conditions caused by poverty. On page 8 of “Feeding Britain” is the statement:
“Let us therefore begin by stating the blindingly obvious. An individual is in danger of going hungry when they do not have enough money to buy enough food as their body requires. There are people in this very position right now in this country.”
When people who are already poor are suddenly deprived of regular income, e.g. though unemployment or other reasons why they have to rely on the benefits system, they have no reserves and they immediately experience acute hardship. The rock-solid evidence collected for these reports shows that delays in benefits processing some by design, some though incompetence and inefficiency, compounded by a capricious and arbitrarily administered sanctions system, are a major contributor to the large scale increase of hunger in this country.
I know that I have been very lucky. Every day of my life (and I am now 65) I have known where my next meal is coming from. But I was not born in this country and reading some of the evidence collected for these reports, I am reminded of what my parents lived though in 1944 – 45 in the Nazi occupied Netherlands: families reduced to having nothing, without heat, light and food in their home; people scavenging through refuse to try to find some thing edible, and so on. About 4.5 million people were affected
But this is the UK in 2014, a rich country, and now literally the same things are now happening here to many people. A number of submissions to the reports outlined how people had become so hungry that they resort, though sheer desperation, to stealing essential goods or scavenging through bins and skips behind food outlets, including parents and children. Others stated that families cannot cook the food they collect from a food bank when they get home because they have no cash to put in the pay as you go utility meters. The number of officially recorded medical primary and secondary diagnoses of malnutrition in England has risen from 3,161 in 2008 -2009 to 5,499 last year.
On page 17 the Report’s summary of evidence states “ (The) data would indicate that the number of people in this country who are at risk of going hungry may be in the region of four million.” I.e. hunger is beginning to affect people here on a similar scale as the early stages of the 1944-45 Dutch famine. The difference is of course that here the hungry are a minority, dispersed amongst the well-fed majority.
How could this possibly have come about? This country has easily enough food and other resources to enable everybody to have an adequate minimum standard of nutrition and generally adequate living conditions. We know from the thousands of volunteers who donate their time to run food banks and the millions of people who make donations to them that the British people are generally caring and compassionate by nature and didn’t want this to happen.
I also know that you and your government have been in power for almost five years and decided to let this situation develop without doing anything about it and callously and irresponsibly refused to collect the data and to compile the statistic on hunger in this country, so that this had to be done through private initiatives. You have adopted policies, as the reports make abundantly clear, which made the situation worse, and for ideological reasons even refused European Union aid to help the hungry.
In the spring of 1945 my country was not so fussy when very low flying RAF bombers– who couldn’t be sure that they would not be shot at - dropped British emergency food aid and saved many thousands of lives. We were just grateful and still are to this day. When I was young I have seen perfectly normal, sane and balanced men and women break down and burst into tears when they had cause to relive memories of those events. This is one of the things hunger can do to people.
There is no objective reason why anybody should go hungry in this country. I really don’t get it. Why do you hate the poor, the vulnerable, those who are badly paid in insecure jobs, those exploited by landlords so that they don’t have enough to live on, those unreasonably persecuted by sanctions and inadequate and delayed benefit payments, the unemployed, those who genuinely cannot work, and all their children? What have they ever done to you? Please explain it to me. Why do you hate these people so much?

A night out with the stars

A good while back a got a call from a Croydon Guardian reporter saying that I had been nominated for the Croydon Guardian Croydon Champions Community Champion award. The reporter told me that a friend had nominated me, primarily for my efforts in trying to stop the incinerator. The reporter basically asked me to sell myself, not something I find easy to do.

The sales pitch appeared in the Croydon Guardian a couple of weeks later. Then about a month ago, I was advised by email I was one of the three finalists for the Community Champion award. This came as a surprise because the stop the incinerator campaign can be quite political at times. However, I think my other bits of community campaigning added weight to my nomination. I was sent two tickets to the ceremony at the Hilton Hotel.

The awards are now in their 13th year which gives an indication of how they have become a major annual event. I went along with my dad. When I got there I recognised one or two faces including Robert Gibson from Save Upper Norwood Library. He was there as a nominee for Team Of The Year. Robbie and I had an opportunity to have a good catch up on our respective campaigns after the ceremony.

The winner of the Community Champion award was one of the first to be announced. The format was that the guest who opened the envelope,in our case Nick Hitchens, Assistant Editor of the Croydon Guardian, announced the Highly Commended award and then the winner. Nick announced Fred Wallis first as Highly Commended. Mr Wallis was influential in stopping Purley Swimming Pool from closure. Therefore, the winner was either Fatima Koroma or yours truly. When an audio was played of each of the nominees, I immediately felt that Fatima should win. She founded Croydon Foodbank and works there everyday.


My heart started beating fast as the announcement was about to be made for the winner. To my relief Fatima won! Everyone on my table turned to offer me commiserations. It was all a bit surreal, it felt like being at the OSCARS!! I didn't feel unlucky at all. I was honoured and humbled to be on the shortlist. Fatima is a deserved winner and I genuinely would have felt embarrassed if I had won. We exchanged messages via twitter afterwards.

The night progressed with one amazing trio of unsung heroes after another vying for their respective award. A wheelchair bound man sitting on the same table as me won the Sporting Champion award. Ten years ago this bus driver was left paralysed after being brutally assaulted on his bus at West Croydon. He has rebuilt his life, and become national disabled champion and then world disabled champion at lawn bowls! He was in tears when he won. I felt my eyes start to fill with tears on his and other stories of bravery.

At the end of the night we were presented with a commemorative booklet with all the results. My dad spotted my face on the inside back cover among all the other Commended. 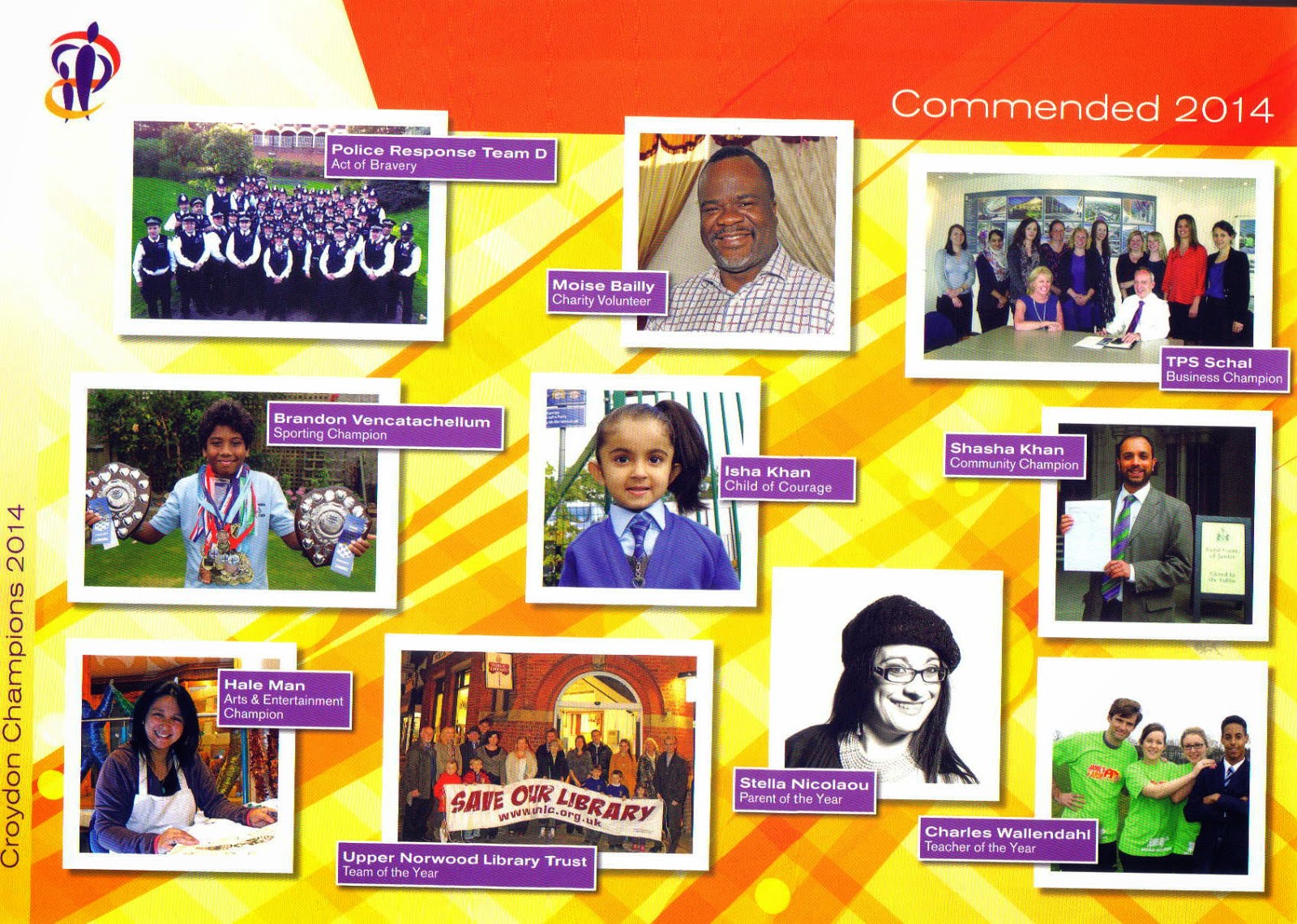 To quote Nick Hitchens, who wrote an introduction on the inside cover of the booklet:

Greatness should not be measured in the number of boutique shops in the High Street or flashy skyscrapers punctuating the skyline, bus also by the character of the people who live here. 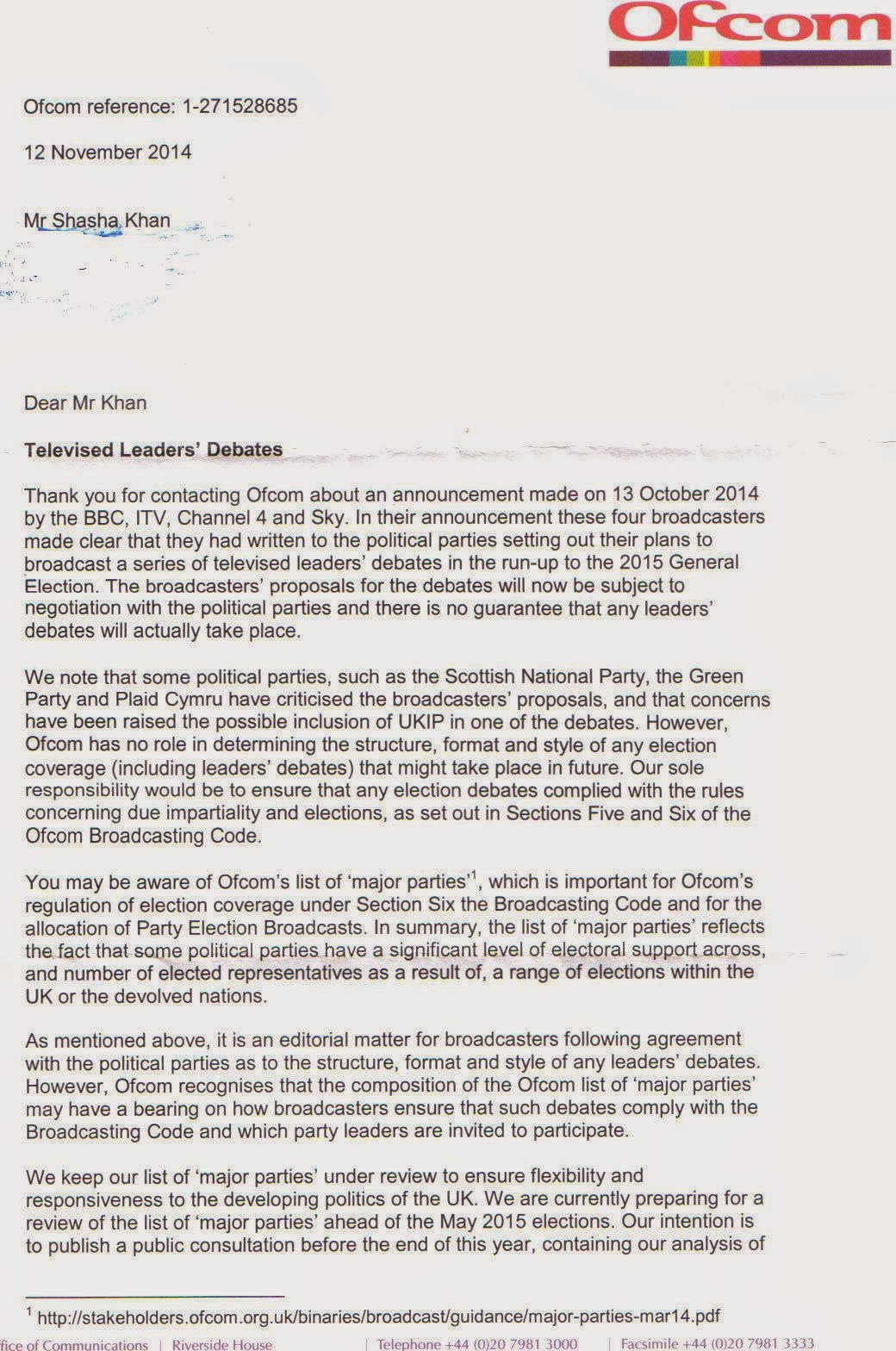 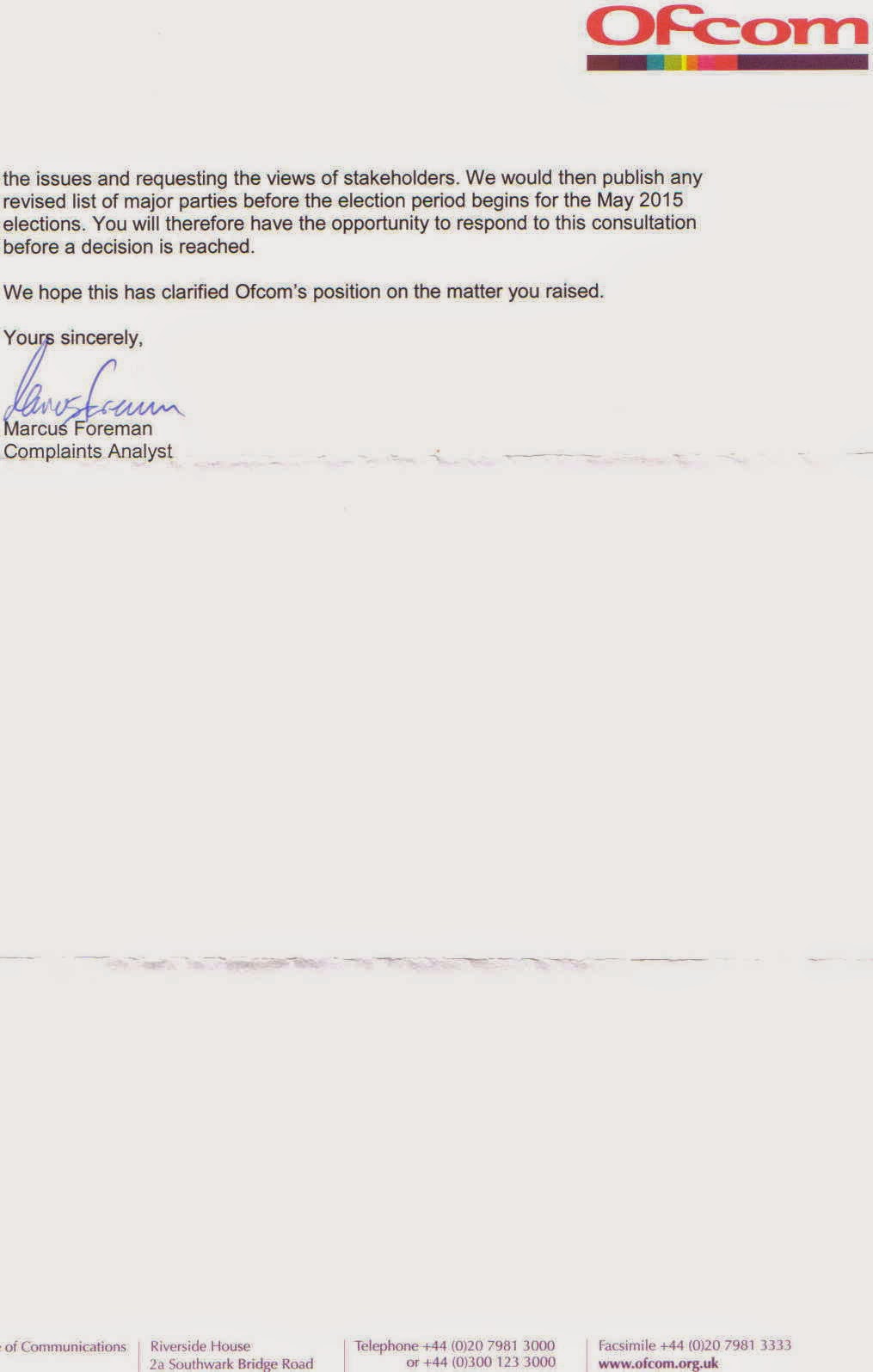 A fairly considered response to my enquiry. In the letter the Complaints Analyst refers to the 'major parties', I've looked these up. Presently, in Great Britain the 'major parties' are defined as the Conservative Party, Labour Party and Liberal Democrats. Evidently, regulation needs to catch up with public opinion,