Reaction to dispersal zone at the Rec 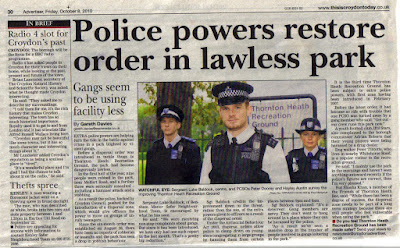 Comment given to Croydon Advertiser regarding the dispersal zone at the Rec.

New dispersal powers have certainly made a difference to Thornton Heath Recreation ground BUT unless they are part of wider strategy then I am not convinced perceptions of the park will permanently change.

Demonstrators lobbied the last council meeting. Greens were there in force.
The facts are that the Council is planning to cut upto one third of its workforce and to privatise many services. As many as 2000 jobs could go as the Council tries to cut its budget by £70 million over the next few years. 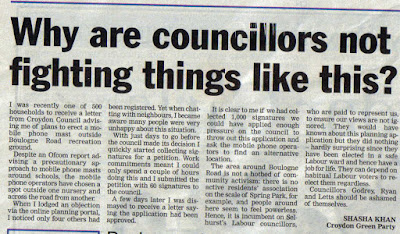 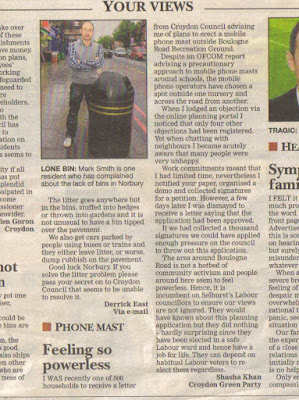 I was recently one of five hundred households to receive a letter from Croydon Council advising me of plans to erect a mobile phone mast outside Boulogne Road Recreation Ground. Despite an OFCOM report advising a precautionary approach to mobile phone masts around schools, the mobile phone operators have chosen a spot outside one nursery and across the road from another.

When I lodged an objection via the online planning portal I noticed that only four other objections had been registered. Yet when chatting with neighbours I became acutely aware that many people were very unhappy about this situation. Work commitments meant that I had limited time, nevertheless I notified your paper, organised a demo and collected signatures for a petition. However, a few days later I was dismayed to receive a letter saying that the application had been approved.

It is clear to me that if we had collected a thousand signatures we could have applied enough pressure on the council to throw out this application and ask the mobile phone operators to find an alternative location.

The area around Boulogne Road is not a hotbed of community activism: there is no active residents association on the scale of Spring Park, for example, and people around here seem to feel powerless. Hence, it is incumbent on Selhurst’s Labour councillors, who are paid to represent us, to ensure our views are not ignored. They would have known about this planning application but they did nothing - hardly surprising since they have been elected in a safe Labour ward and hence have a job for life. They can depend on habitual Labour voters to re-elect them regardless.

On Saturday 9 October, CCAT supporters will walk 10km in stilettos through central Croydon to raise money and awareness of our campaign to help the victims of human trafficking in Croydon.

We estimate it will take around 3 hours, or just a tiny proportion of the working day of a young woman forced to sleep with men, every day, week in, week out.

To get involved, or to sponsor our 10km stiletto walk go to:

Ø Over 2 million people are trafficked across international borders each year,

exceeded only by drugs trafficking

Help us free the slaves of human trafficking in our town!

Croydon Community Against Trafficking (CCAT) exists to raise awareness about human trafficking and encourage action against it.

A mobile phone mast to be erected adjacent to two nurseries. 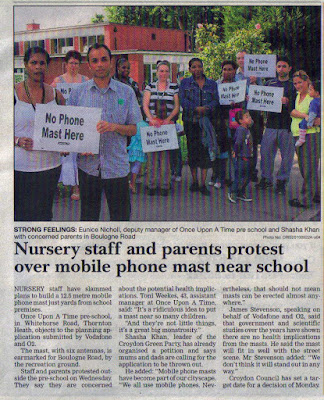 Upon receiving a letter from the council about a proposed mobile phone mast around the corner, I decided to view the application online. The location map accompanying the application identifies the site as being opposite a pre-school and yards from a nursery.

There is evidence to suggest that mobile phone masts are safe. There is also some evidence to suggest the contrary. The Stewart Report which can be found on OFCOM's sitefinder website (an initiative recommended by the report) advises a 'precautionary approach', and has a section on base stations around schools. The report states:

We suggest therefore that a better approach would be to require that the beam of greatest RF intensity (see paragraph 4.32) from a macrocell base station sited within the grounds of a school should not be permitted to fall on any part of the school grounds or buildings without agreement from the school and parents.

Indeed some countries forbid the erection of base stations on sensitive locations, such as schools. Additionally, if a child uses a mobile phone whilst adjacent to a mobile phone mast then the power directed to the mobile phone from the mast is that much greater.

When considering all of the above I decided to lodge an objection and raise awareness of what was being proposed.

"Mobile phone masts have become part of our cityscape. We all use mobile phones. Nevertheless, that should not mean masts can be erected almost anywhere, especially in front of two nurseries. The Stewart report that appears on OFCOM's web site recommends the precautionary principle until gaps in scientific knowledge are filled. That is why we feel the mobile phone operators should find an alternative location. However, to do this we need the Planning Committee to reject this application. The mums and dads and local residents urge them to throw it out"

Despite the objections I received this reply:

With reference to the correspondence about the application described above, I write to inform you that the Council has reached the following decision on the proposal:

Please note that a schedule will be shown overleaf if any conditions/reasons or informatives are part of the decision.

Please quote the application number in any future correspondence.

I have since sent the comment below to the papers:

"This is a liberty too far. Given that the OFCOM' report advises a precautionary approach to mobile phone masts, especially around schools, I feel the council may have underestimated the risk. There is no doubt in my mind I could have collected 1000 signatures if I had the time. Sadly due to work commitments, I couldn't devote enough time to this campaign. If we had collected 1000 signatures for our petition, maybe then the council would have recognised the strength of feeling about this proposal.

"As usual the three Labour councillors have done nothing. They should be ashamed of themselves. They are paid to represent the residents in Selhurst but because they have been elected in a safe Labour ward they can sit back knowing they'll be re-elected in four years time. If they had come out to speak to the residents, as I did, they would have known the anger that everyone feels about this mast.

"It will be an absolutely tragedy if in the future we find the science behind the health effects of mobile phones and masts has been suppressed, as it was for cigarettes. It is important to remember that mobile phone operators contribute billions of pounds to the government through taxation every year. With that comes massive lobbying power.

"As I have only just received the council's response, I will seek advice and speak with the local residents and parents about what we should do next."

The Croydon Advertiser has been running a story about our campaign and today reported on the decision.