Did anyone think about light pollution??

Result of the Kingswood and Burgh Heath By Election 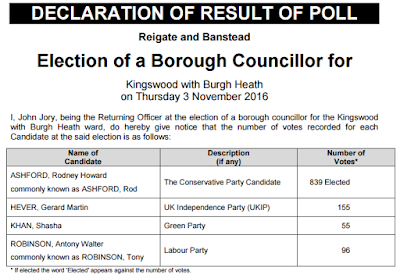 Fifty five votes doesn't sound like much but on a 20.5 per cent turnout, in an ultra-safe Tory seat it represents 4.8 per cent, which in my humble opinion is creditable given we ran a very limited campaign. If the High Court judgement on BREXIT came out two weeks earlier, I would have expected UKIP to be nearer 20 per cent.

Is a Trump Khan double possible?

Today, five days before the leading country in the *free world* elects a new president, there's the not insignificant matter of the Kingswood and Burgh Heath By-Election.

I put my name forward, and was chosen by the local party to stand. My personal statement has been published on the Surrey Mirror web site, along with the other three candidates (no LIB DEM standing).

It is a very safe Conservative seat. Given my usual patch is Thornton Heath in Croydon, it has been an interesting experience knocking on the doors in Kingswood, where some streets are fully gated and houses go for £2.5m.

One resident in Kingswood explained that this government and the last one have made a right mess of the country. He was referring to BREXIT. He pointed out that the people who lived in this gated community had predominately sourced their wealth in the City of London, which in turn is essential for the prosperity of the UK. Hence, in his eyes, David Cameron was foolish in calling the EU referendum and risking it all, and Theresa May is equally foolish now for embracing a 'hard Brexit line'.

However, the only election that matters in most peoples eyes takes place next Tuesday on the otherside of the Pond.

The world is watching and wondering if Donald Trump will become President of the USA.

My cousin lives in the US. He put it quite succintly in a message to me:

I think in the privacy of the voting booth (and mail-in) people will vote Trump. Because they are fucking stupid. "Bigly". Clinton isn't perfect and it makes it a not-so clear cut decision, but the choice between a pussy-grabbing, lying, misogynist, tantrum-prone, racist, multiple-bankruptcy burdened business failure with more than 3000 lawsuits, AND a lying shrewd politician tied to Wall Street excesses with email issues, shouldn't be that difficult.