From Mr Shasha Khan
Councillor  Mark Watson
Question No.
PQ032-15
Given the levels of fly posting by the SayNo20mph campaign http://tinyurl.com/o8kwoa8 and the clear links between their web site and the UKIP Croydon North web site (the 20mph pages are identical), will this council bill UKIP for the clean-up operation or even seek a prosecution?
Reply
Officers have made enquiries regarding the flyposting of SayNo20mph materials. The identity of the person or organisation responsible for the flyposting is not clear and there has been no admission of guilt by any one person. As the Council is unable to prove who actually put them up, the evidential basis for enforcement action, including prosecution or seeking the costs of removal, is not straightforward. The Council is unable to enforce purely based on links and assumptions.
A warning regarding flyposting has nevertheless been sent to the contact address listed on the SayNo20mph materials as being involved and the materials were removed. No further materials were put up after that point to our knowledge. No reply was forthcoming from the contact address.
The Council is unable at this point in time to take any more action. Our response has been measured and, insofar as the flyposting appears to have occurred only on those lamp columns where the Council’s own scheme notices were displayed, is considered proportionate.

One can gauge how active or flourishing a local party is by the number of people who leaflet homes regularly, volunteer for officer roles, write letters to the paper, help run stalls, attend and contribute at business meetings, support fundraisers, attend socials, donate to the local party and stand for elections.

Tom Voute did all of the above.

Moreover, as other active Greens know, the more active you become, your colleagues in the local party become your friends.

That it why we were all sad to hear the news that, after a short illness, Tom had passed away on 19th June 2015.

Tom always made himself available to stand as candidate in his home ward of Kenley. It's a shame we never targeted Kenley because the headline of our pre-election leaflet would obviously be:


Until very recently he was our local party treasurer and London Federation of Green Parties representative. Despite his illness he was active as ever this year.

He was wise man with a great Dutch accent and an infectious laugh. We will miss him. 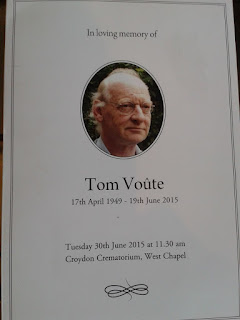 A good number of our local party attended his funeral, His son, James, made a moving tribute to his father, detailing all the things his father had taught him. He, his brother Nick, and their mother Beth are in our thoughts.

I've searched my PC, laptop and phone and found some photos of Tom over the years. I've put them together in a vid.

Tributes to Tom have been circulating on social media and emails. Here a couple from Tracey Hague and Martyn Post.

"He was a great man, full of experience, enthusiasm and humour but also a great lover of life (who can forget his Argentinian tango at our eco-disco?). Everyone has fond memories of him; he will be sorely missed both locally and at London Federation meetings. In the meantime he would probably want us all to get on with Green Party work in making this world a better place to live for everyone. RIP Tom - I hope I can emulate a fraction of what you embodied so wonderfully."


"This is such terrible news.  Tom was such a lovely person.  He was always happy to talk about any subject, he was wise, friendly and will be such a loss to the whole local party.
I will always remember meeting up with him and Gordon on pretty much a daily basis last year delivering leaflets across Croham and going for coffee afterwards.  Tom and Gordon would discuss buildings and art, while I sat there listening, unable to add anything to the conversation.
I first met Tom in 2007, a year or so after I joined the party and straight away I liked him. He was very welcoming and so inteligent.
My heart goes out to his family.  I hope we can get a fitting tribute for him."

Tom's occupation was local authority waste management. Last year he wrote a piece on flytipping for Inside Croydon.

There's a lovely picture of him on the Croydon Green Party Facebook page here and one of his letters to the local paper can be found here.