7 months later I get the legal costs bill. 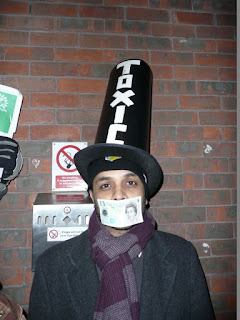 I sent a press release out from the STOP THE INCINERATOR campaign on Friday 20th. It has already been published in the Adder and Inside Croydon. On a personal note, I am now anxious about what happens next. There is an argument that I don't pay the bill and risk a CCJ in an attempt to get a judge to rule that the £5400 shouldn't be paid because of that has gone on. As I type these words I just think it may be best to move on with regards the judicial review.  Yes, there are questions that need answering about corruption etc. but these two issues shouldn't be conflated.  More to the point, I haven;t got £5400 readily available.

Solicitors acting on behalf of Sutton Council have contacted Richard Buxton solicitors demanding that Shasha Khan pay costs of £5000 plus £400 in accrued interest within 14 days.
Sutton Council spent tens of thousands of pounds defending their decision to grant planning permission for the South London incinerator in the High Court. Normally the defendant can recover their costs if the judge rules in their favour. However, the member states of the EU have signed up to the Aarhus Convention which ensures all citizens are able to obtain access to justice on environmental issues. Under this convention, when the claimant, in this case Shasha Khan, is an individual, the recoverable costs if the High Court challenge is unsuccessful are capped at £5000.

The South London Legal Partnership sent an email with a copy of the court order to Richard Buxton on 16th November 2015.

Reacting to the demand, Shasha Khan said, “I am a bit stunned by the demand. I don’t have £5400 readily available. “

“As soon as Justice Sales refused permission for an Appeal back in late April I spoke to my (now former) solicitor about the £5000 capped costs that I was liable for. I was advised that there was a potential that the defendant wouldn’t come after the £5000. So we decided to wait.
“Seven months have elapsed and suddenly Sutton has decided to come after £5k, with interest! I am wondering if they’ve done this deliberately to accrue as much additional cash as possible – far better than putting the £5k in the bank. It’s like rubbing salt in the wound. I have continued to fight the granting of planning permission despite losing the judicial review. Since the decision in April, a whole series of damning corruption, intimidation and transgression revelations (1) have come to light about what went on behind the scenes, and we haven’t given up forcing Sutton and the South London Waste Partnership to come clean on their dodgy behaviour. Maybe this is their way of saying, ‘don’t question us peasant!’

“I have contacted the South London Legal Partnership but the ‘team leader’ is on annual leave and no one else can help me. This leaves me just 10 days to raise all the money.”