Leader of Labour Group's response and my rebuttal 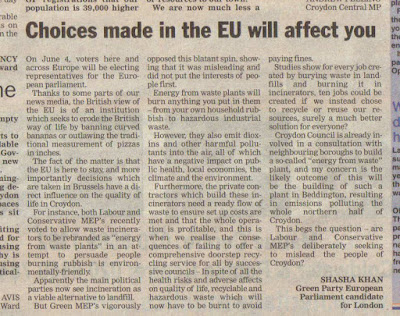 I sent in the above letter to the Croydon Guardian earlier this month about the looming spectre of an incinerator being built.

Things are more clearer if you refer to this posting.
Anyhow, I sent in the rebuttal (below) which I am relieved to see was published in yesterdays Croydon Guardian.
21.05.09
Dear Editor,
Labour councillor Tony Newman’s response to my letter smacks of desperation. The Green Party are opposed to incineration, yet Cllr Newman has sought to manufacture the Green party’s initial position as somehow being alongside the Tories in favour of incineration! He similarly manufactured a story in Labour’s Waddon by election leaflet. That time Labour claimed to have found a secret document showing that an incinerator was going to be built in Factory Lane. How desperate. Back then the Green Party did brand Labour’s behaviour as disgraceful for playing dirty politics with a serious issue. It was the Tories who described the tactic as scaremongering to win votes. We took a responsible approach and raised concerns that an incinerator in Beddington was the likely outcome of an ongoing consultation. Unlike any other party the Greens submitted a 5000 word document opposing incineration and even met with the Project Manager.
Hasn’t Cllr Newman learnt anything from the events in the last couple of weeks? People across the country are fed up with sleaze and old style dirty politics and are turning to fresh alternatives. Notable figures like Joanna Lumley and Martin Bell – the MP in the white suit - have publically backed the Green Party to clean up politics for a better future.
That said I and my colleagues are prepared to work with anyone that opposes incineration for the sake of Croydon. Cllr Newman rightly points out incinerators belch out dangerous air. But maybe he can start by having a word with his Labour colleagues in the European parliament who voted alongside their Tory counterparts to rebrand incinerators as ‘energy from waste plants’. He could then have a word with Labour MP’s who have just handed a £113 million grant to Croydon, and three neighbouring boroughs, to build such a plant.
The Green Party’s position is principled and clear, across the country, in whatever tier of government. We stand for what we believe in: Recycle, reuse and compost is the solution to our landfill crisis.
People of Croydon want their politics just like they want their air: clean.
Yours sincerely, 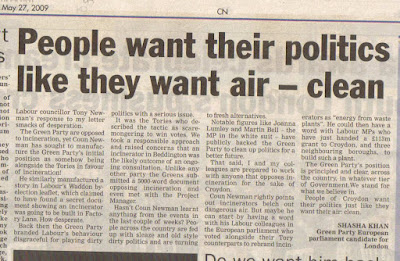 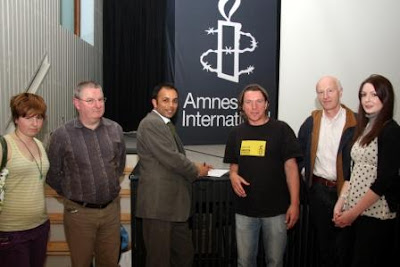 Thanks to Hugh Sandeman of Kingston Amnesty for forwarding this photo to me. It was taken at last weeks hustings held at Amnesty's head office near Old Street. I signed the pledge letter with pleasure. Incidentally, the UKIP panellist astonishingly blamed the furore around global warming on Margaret Thatcher who raised the issue in 1979. He insisted that climate change was not man made and that the planet was simply going through a warm period.


If elected as Member of the European Parliament (EP) I pledge to:

Uphold human rights in EU foreign policy
By ensuring human rights are not sidelined but rather are integral to trade, migration or energy polices with other countries

The Green Party on MP's Expenses

Darren Johnson, London Assembly member for the Greens, talks about the expenses scandal and ethical politics. A Green vote would send a strong positive message of change, not just on the 4th of June for European elections, but in the general election as well. 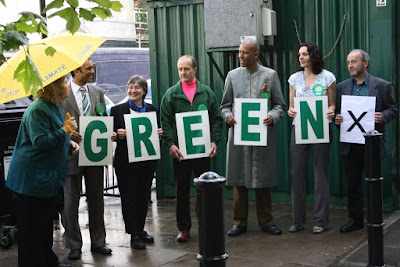 From Rupert Read in Norwich 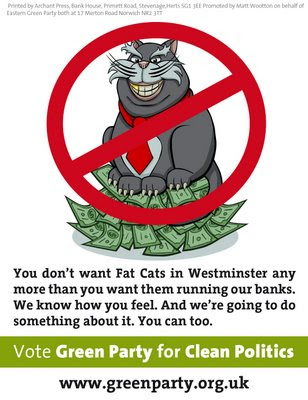 In a YouGov poll to be released tomorrow (Monday 18 May), 34% of respondents said they would either definitely be voting Green or would consider voting Green. This is the highest percentage ever to indicate potential support for the Greens.

With the expenses row in full flow, and UKIP considered unlikely to benefit from voters' anger at other parties' sleaze thanks to its own frequently-criticised record, the Greens are not ruling out a potential surge like that in 1989, when 2.2 million Britons voted Green in the European elections.

But even a much smaller swing from the big three could be enough to win new Green seats in several regions, as well as holding the party's existing seats in London and the South East.

Green support in general polls jumps from 6% to 11%

A general voter-intention poll this week for the Sun newspaper found that 6% were definitely intending to vote Green.

But in a poll commissioned by UKIP and published today, the Greens are showing on 11% - enough to win seats in several regions beyond the existing seats in London and South East.

The Greens have pointed out that they are often underestimated in opinion polls ahead of European elections. For example in 1989 pre-election polls were showing the Greens on 7-8%, but the actual Green vote turned out to be 15%.

Letter on incineration in the local paper 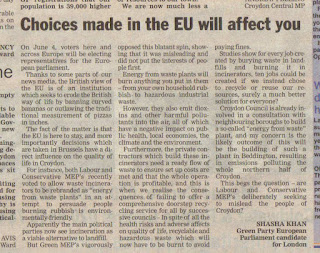 On June 4th voters here and across Europe will be electing representatives for the European parliament. Thanks to some parts of our news media the British view of the EU is of an institution which seeks to erode the British way of life by banning curved bananas or outlawing the traditional measurement of pizzas in inches.

The fact of the matter is that the EU is here to stay, and more importantly decisions which are taken in Brussels have a direct influence on the quality of life in Croydon.

For instance, both Labour and Conservative MEP’s recently voted to allow waste incinerators to be rebranded as ‘energy from waste plants' in an attempt to persuade people that burning rubbish is environmentally-friendly.

Apparently the main political parties now see incineration as a viable alternative to landfill. But Green MEP’s vigorously opposed this blatant spin, showing that it was misleading and did not put the interests of people first.

‘Energy from waste plants’ will burn anything you put in them - from your own household rubbish to hazardous industrial waste. However, they also emit dioxins and other harmful pollutants into the air all of which have a negative impact on public health, local economies, the climate and the environment.

Furthermore, the private contractors that build these incinerators need a ready flow of waste to ensure set up costs are met and that the whole operation is profitable - and this is when we realise the consequences of failing to offer a comprehensive doorstep recycling service for all by successive councils: In spite of all the health risks and adverse affects on quality of life, recyclable and hazardous waste will now have to be burnt to avoid paying fines for burying it in landfills.

Studies show that for every job created by burying waste in landfills and burning it in incinerators, ten jobs could be created if we instead chose to recycle or reuse our resources, surely a much better solution for everyone in Croydon?

Croydon council is already involved in a consultation with neighbouring boroughs to build a so-called ‘energy from waste plant’ and my concern is that the likely outcome of this will be the building of such a plant in Beddington, resulting in emissions polluting the whole northern half of Croydon. This begs the question: Are Labour and Conservative MEP’s deliberately seeking to mislead the people of Croydon?

Croydon Save our Schools petition

CROYDON SAVE OUR SCHOOLS PETITION

Croydon Save Our Schools have started a petition (1) calling for a delay in signing of the funding agreements with Harris Federation and Oasis Trust until a review of Croydon Council’s tactics in circumventing opposition to the plans have been investigated.

“Many campaigners and interested parties feel that Croydon Council has rushed through the Secondary Schools Review without proper consultation. In their eagerness to deliver two new academies in September, the council has sidestepped the concerns of those who will be affected by the changes.

“Moreover, we are now in May and still the statutory process is still ongoing. I am sure even the sponsors would like more opportunities to address the concerns of interested parties and actual time to plan for the new school year, in September. Timetabling, staffing and other administrative issues should not be rushed because ultimately it’s the education of the children that will be affected."

Provided there are 500 signatures or more on the petition, it will be passed to officials who work for the Prime Minister in Downing Street, or sent to the relevant Government department for a response.

Labels: croydon, petition, save our schools

'Malcolm was Branch Secretary of the Croydon council staff's UNISONbranch (previously NALGO before merger with NUPE) for many years.
In this role he led staff's struggles for better pay and conditions aswell as coordinating casework for members. As Chair of Croydon TUC heplayed a key role in organising the ongoing Save Our Schools Campaignin Croydon, involving teaching unions, parents, school children, trade unionists and other activists. Despite the toll that Malcolm's dedicated trade union work exacted on his health, his death in his 50's has nevertheless been a terrible shock to all who knew him. We remember especially his good-humoured nature and his unwavering commitment to creating a fairer world for all.'