Hartwells and other shops on Brigstock Road need support 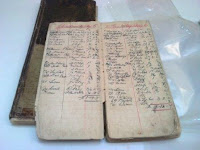 Hartwells Butchers has been trading for 96 years on Brigstock Road. Robert Hartwell, the third Hartwell to run the shop, is at risk of not making it to the 100 year mark, mainly down to the recession and the massive Tesco's down the road. I've known him for some time. Its a sign of the times if he doesn't make t to the 100 year mark. Robert Hartwell showed me the shops' original order book (left) that his grandfather used.


Just a couple of days after the local elections, and I was back out there campaigning for community in Thornton Heath. This time it was the shopkeepers on Brigstock Road who needed support. Recently shops on Thornton Heath High Street received a lifeline in the form of the new 30 minute free parking bays. However, shops on Brigstock Road have been overlooked. I made a phone call to the council and David Wakeling the Traffic Design Manager came to discuss the issue with the shopkeepers. By all accounts the meeting was very positive. After the meeting the shopkeepers asked how I got on in the local elections. They were surprised that I didn't poll enough to win in Bensham Manor, mainly because when it comes to local activity they simply wouldn't know who to approach for support. 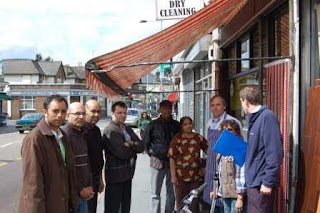 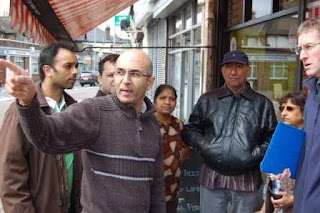 On behalf of the three Green Party Parliamentary candidates and our 70 local election candidates, may I through your letters page thank all the Croydon electorate who came out and voted on May 6th, and especially those who voted Green. The response to the televised leaders' debates clearly led to much tactical voting, yet so many of you still voted with the courage of your convictions. Hopefully with a reformed electoral system next time round, we will achieve more than just one Green Party MP at Westminster.
Thanks are also due to the Electoral Services staff at the Town Hall. They had two major elections to manage simultaneously and worked all hours of the day and night to ensure their smooth running, whilst remaining unfailingly helpful and courteous.
Yours sincerely

One of our local Green Party members told me the other day that he was always getting mixed up between Clegg and Cameron because they look so similar! What is more, half of the the Lib Dems that now hold cabinet posts have very similar backgrounds to their new Conservative colleagues. Three of the 6 profiles below are Liberal Democrats and other three are Conservatives. Its not east to tell them apart.

Profile 1
Estimated wealth£2.2m. Educated at his local comprehensive school; then went on to Oxford University. First elected to the House of Commons in a by-election in 1989. This person is a Management Consultant by profession and from 1997-2002 was chairman of the International Democrat Union.

Profile 2
Estimated wealth £1m. Brought up in a council house that his parents later bought. Formerly a GP before entering parliament. Studied at University of Glasgow where this person became President of the Conservative Association. Shareholder of Arrest Ltd.

Profile 4
Educated at a Roman Catholic independent school, and then went to graduate with a double first at Cambridge University in economics. This person went on to be a Vice President at JP Morgan in 1987 to 1992. First elected into parliament in 2001. Has written a collection of essays championing free trade and the private sector.

Profile 6
This person was educated Nottingham Grammar School and then went on to Cambridge University. He went on to join the Conservatives at University but failed in his attempt to become President of the Cambridge Union. First elected into House of Commons is 1970. This person enjoys jazz music and birdwatching. 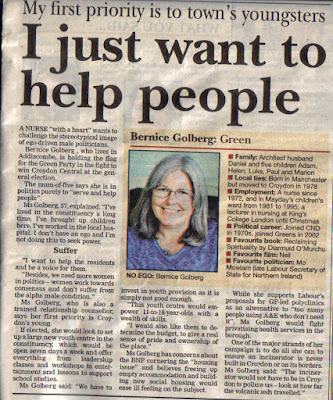 Has Murdoch media succeeded in getting their man into number 10?

Thoughts on the May 2010 elections 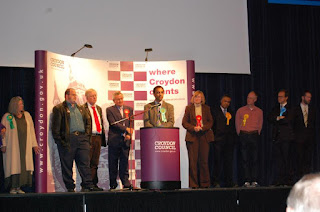 Minutes before this photo was taken (6.05am, Friday 7th May), Caroline Lucas was duly elected MP for Brighton Pavilion

RANDOM THOUGHTS ON THE LOCAL AND GENERAL ELECTIONS

Plenty of thoughts running through my head. Until I get a chance to put them down, here are a couple of links:

Full local results can be viewed on the Croydon Council web site and a summary of all the parliamentary seats the Green Party contested can be viewed here.

Green Party percentages in the local elections in Croydon

You tube video of the Battlebus in Croydon.