Movie: Croydon and Sutton Greens at the Stop the War demo 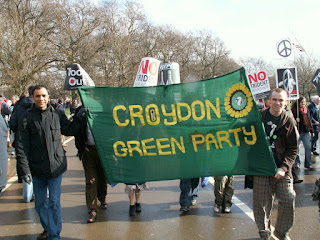 Press Release: TROOPS OUT OF IRAQ AND HALT TRIDENT REPLACEMENT
The Government must abandon plans to replace its Trident nuclear missilesand immediately withdraw all UK troops from Iraq, says local Green Party campaigner Rob Steel.
After the march and rally from Hyde Park to Trafalgar Square Rob Steel said: “Replacing Trident would be illegal, immoral, counter-productive – andutterly irrelevant to the real security threats we face today.
“It would cost the British taxpayer an estimated £76bn over the next fewdecades – money that could be used to fund practical solutions to climatechange, the far greater security threat we face, as the recent UNInternational Panel on Climate Change has again made clear.
“It will put the UK in direct breach of the UN’s Nuclear Non-ProliferationTreaty, and would increase the global supply of nuclear materials bylaunching a new nuclear arms race.”
Ends
-------------------------------------------------
Tags croydon, greenparty
Posted by Shasha Khan at 7:28 pm No comments:

I was very sorry to read that pupils at Archbishop Lanfranc School in Croydon had to shelve their plans to recycle paper from their school because their school budget didn’t allow it. (“We can’t afford to go green” – 16th Feb). It will be the school children of today that will have to pay the costs of tomorrow if catastrophic climate change is not avoided. Recycling paper helps reduce carbon emissions by avoiding the need to extract and refine raw materials, and reduces methane emissions from landfill sites.
The political will in the Labour and Conservative parties is missing to deal with this problem and the wider issue of under funded schools.
Instead, they are prepared to pay a staggering £76billion to renew Trident nuclear weapons defence system. Replacing Britain’s nuclear arsenal would be illegal, immoral and utterly irrelevant to what the Government has acknowledged is the greatest security threat we face: climate change.
I will be writing to the school to find what “mutually beneficial agreement” this cost slashing Conservative Council will offer the school and to offer our support to their recycling campaign. 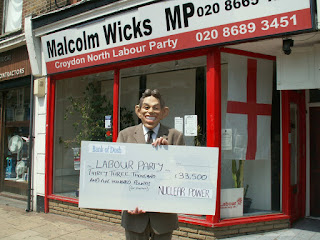 "I welcome the result today - and thank the many people involved, especially Greenpeace.Today's historic result shows that the government have got a fight on their hands. Despite their scheming, the combined efforts of many different organisations, including the Green Party has ensured that their ploy to bring in nuclear power by the back door has failed. The Energy Review was clearly just a rubber-stamping exercise for a decision the Prime Minister had already taken.”

Local Greens used street theatre to highlight the rubber stamping and to speculate why the then Energy Minister, Malcolm Wicks, went for the nuclear option. (1) They also collected signatures in Croydon Town Centre as part of an European wide campaign. (2)

"Some of our local members submitted evidence to this case, pointing out that there had been a failure to present clear proposals and information on key issues. We are glad the high court judge has joined us in objecting to this sham consultation. The government will now have to abandon the conclusions of the Energy Review, and we are looking forward to taking part in a full debate on how we use and generate electricity in the UK. We hope that this time the government listens to common sense and the views of ordinary people and rejects the expensive and dangerous route of nuclear power. There are huge opportunities in energy-saving and renewable energy just begging to be taken up. Ten million homes still have unfilled cavity walls in the UK and we are failing to take advantage of the massive wind and wave power resources that are unique to our islands. If the government doesn't have the vision to grab these opportunities, they will not be forgiven.”

(1) Figures published by the Electoral Commission showed money flooded in to the Labour Party from energy companies and lobbying firms linked to the nuclear industry. Crucially, the cash donations give the pro-nuclear lobby access to decision makers.

Details of where the Sutton & Croydon groups will meet up will follow.

CND Chair Kate Hudson talks about why you should attend the demonstration.

The Appeal Decision for 66-70 Beulah Hill

To the great dismay of local residents and the Croydon Green Party, The Planning Inspectorate has decided to grant permission for the development at 66-70 Beulah Hill.

The Croydon Green party worked with local residents to organise a large demonstration outside the properties.

“The Planning Inspectorate has made the same mistake as the council planners, in that it has considered this application in isolation. The Appeal Decision even acknowledges that “Beulah Hill carries high volumes of traffic”(1) yet, concludes that the proportional increase resulting from this development will be insignificant. Why isn’t the cumulative impact of all the developments on Beulah Hill taken into consideration?”

“This whole episode highlights how the democratic process is not working for the people. Local residents, political parties and Labour MP Malcolm Wicks are opposed to the development, yet Mr Wicks’ own government is behind this trend towards increasingly centralised decision making.

This is a very disappointing decision for the residents of Beulah Hill. I hope this doesn’t break their resolve in opposing similar developments in the future. There only recourse is to go to the High Court and here again the democratic process works against the people as the legal costs act as a disincentive. Whatever action the residents choose next, the Croydon Green Party will continue to support them.”

Notes: (1) Taken from section 10 of the appeal decision

The result of Thursday’s Bensham Manor by election shows that the Green Party is consolidating its position in local politics, says Party candidate Shasha Khan. The Party received 9% of the vote and came in a strong third, polling nearly twice the votes of the Liberal Democrats.

“The Green Party is now regularly out-polling the so-called ‘major parties' in Croydon Council elections. Given the amount of money the other parties throw into their campaigns, this represents a particularly good result.

Even though this is supposedly a safe Labour ward, Labour pulled out all the stops to hold on to the seat. As well as pouring cash into the campaign they also used their usual scare tactic of ‘vote for us or the Tories will get in’.

The Green Party doesn’t use scare tactics and we don’t campaign by simply throwing money around. We go out and talk to local people about local concerns – and one of those concerns is the fact that Bensham Manor is neglected under Conservative and Labour administrations alike.

Even in this so-called ‘safe’ Labour seat, people are beginning to realise that their elected representatives are neglecting the area and taking their votes for granted. The support that has been shown for the Green Party indicates that more and more people are now prepared to re-consider their traditional voting allegiances and vote for someone who will fight to improve the area.”

A critical mass (of sorts) 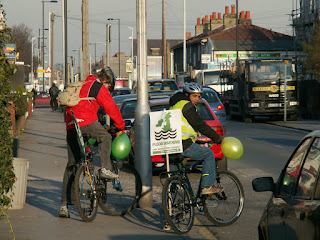 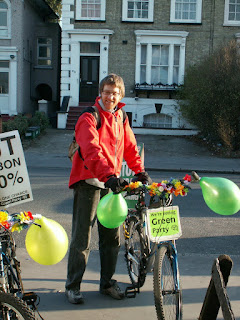 "Greens can now claim with some justification that they are now the third party in Croydon. This is a brilliant result for us because the brand power of the Westminister parties is particularly strong in wards like Bensham Manor. We would like to thank the Bensham Manor residents that put a cross by Green Party. They have voted for a sustainable and ethcial future in Croydon, based on the twin principles of social justice and the environment."

Stop the War in Croydon this Monday 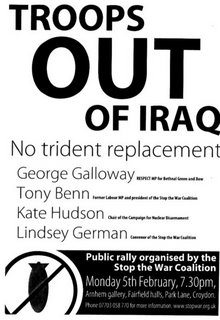 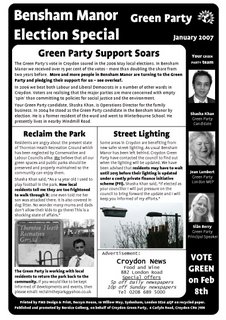 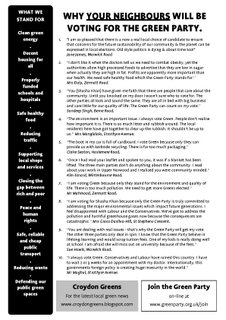 Election leaflets which start "Dear Neighbour" seem to be the Labour party's latest propaganda weapon. In Bensham Manor the Loony candidate asks why has the Labour candidate addressed her leaflet to the voters with the words "Dear Neighbour"? Is Brighton Road (Waddon) next door to Brigstock Road?.

The letter which is causing a stir

link to letter in Croydon Guardian


On polling day, many Bensham Manor residents will, through custom and habit, vote Labour and return another Labour councillor. As a result Labour will continue to take the residents for granted, the Conservative Council will ignore them and the current state of neglect will continue.

As a candidate in the forthcoming Bensham Manor by election, I have spoken to many hundreds of residents about the quality of life in the ward. What is increasingly apparent is the complete lack of investment and council concern for people who live in the ward. This is not solely down to the Conservatives: the greater part of this happened while Croydon had a Labour Council i.e. when its three Labour Bensham Manor councillors actually had influence!

Under Labour a decision was made to update the street lighting to a more effective system in five areas of Croydon. Bensham Manor was NOT one of them. Significantly, the wards that were selected included the most marginal wards of Waddon and Norbury - both major targets for Croydon Conservatives. Additionally, South Norwood, another ward within striking distance for the Conservatives, was also selected. As a result, we now have the bizarre situation where, on one particular street, the half that is in Norbury has had its lighting updated and the half that falls in Bensham Manor has not!

We’ve seen the same pattern with recycling: a month before the 2006 council elections, Labour introduced a kerbside recycling ‘trial’ in four wards in Croydon. I remember this well because this was cynically marketed as a borough wide expansion. Again, two of the selected wards were Waddon and Norbury - the most marginal seats- and another was the Tory target of Addiscombe.

Sadly, the situation is unlikely to change under the Conservatives. I recently enquired about the new council’s next move in relation to the inherited recycling ‘trial’. I found that the trial had been successful and the improved kerbside collections were being made permanent - in Waddon, Norbury and Addiscombe. Bensham Manor will have to wait till the back end of the year.

As for street lighting, the consultant employed by the council told me that the street lighting would be updated, using a costly Private Finance Initiative scheme, in between 2009/10 and 2015. (Note how the timing conveniently coincides with the 2010 council elections.)

I’m not a gambling man but I bet I know which end of the time scale Bensham Manor’s lighting will be updated. Isn’t it about time we got back to delivering local services on the basis of community need, not political expediency?