It's easy to assume that a stand alone mobile phone mast, or single third generation mobile phone, or even a wi-fi system at school is risk-free with regard to human health. However, what about the total exposure? What about cumulative long term exposure of all these different sources of non-ionising manmade electromagnetic radiation? Can it be confidently said there is no risk, especially to children whose bodies are still developing?

James Stevenson from o2, who appears on the video, said at the meeting that the signal coverage, for a mast, is just 1km. Given that mobile phone masts under 15m are erected using a General Permitted Development Order - not full planning application, will we see loads more springing up across Croydon, London and the country?

There are 22.6 billion* reasons why the government might find itself in a difficult position if there was a clear and definitive correlation between proximity to masts and human health.

*£22.6billion is how much the the mobile phone operators paid for the 3G licenses. 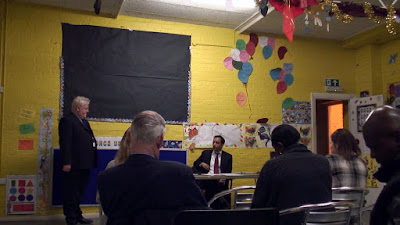 On the 25th January – local residents met with Mr James Stevenson, o2 Community Liaison Officer, to express their concerns about the approved mobile phone mast on Boulogne Road, next to Whitehorse Road. During a lively debate, the representative from o2 and Vodafone agreed to postpone the construction of the mast until ascertained whether alternative locations are indeed available. The audience made it clear they could not comprehend that a park was the only location given the signal radius of the mast.

“This reprieve shows that the community can take on the power of not one, but two mobile phone operators. Mobile phone masts may be a necessary part of our cityscape, but that doesn’t mean these companies can ignore the views of a small yet well organised group of people.”

KEY POINTS ARISING AT THE MEETING

“As new technologies become available to us, we need to be made aware of any potential or increased risks, and given clear guidance on safest possible use. Mr. Stevenson stated that there was no risk from the mobile phone mast. This is contrary to logical thought. As more and more mobile phone masts are erected, as more and more wi-fi internet services become available - in schools and in homes, the issue of measurement of total dose of electromagnetic radiation comes to the fore. Looking at one stand-alone mast is not necessarily looking at the bigger picture.

“Given this continued line that there was no risk to the local residents, I asked Mr. Stevenson if o2 and Vodafone would pay for epidemiological survey, a way of tracking the health of the local residents. He initially rejected the idea but then changed his mind saying, “Come back to me,” implying he would consider it. I have already started drawing up a list of people who are willing to take part.” (2)

(1) Contact details of local residents are available upon request.

(2) There are examples of residents groups who have asked for an epidemiological survey, not necessarily funded by mobile phone operators, which has resulted in the applicant withdrawing their application.

Both the Croydon Advertiser and Croydon Guardian have covered the meeting tomorrow. 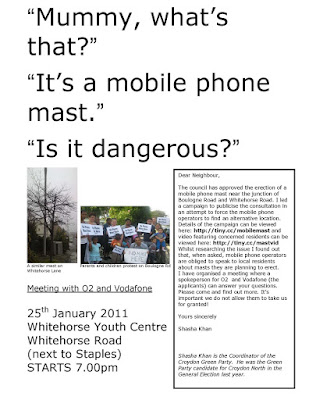 After arranging the meeting with o2's Community Liaison Officer, the next step is to publicise it. In order to ensure that people are aware of the meeting, I have gone for a suitably bombastic style. I hope the outcome is that local people will come and question the applicant. 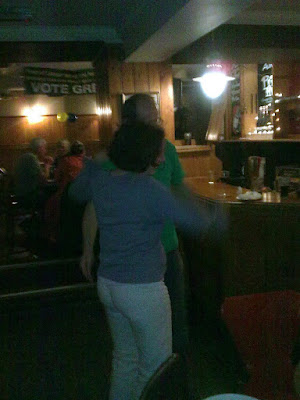 Dancing to the Green beats
Another memorable Croydon Green Party fundraiser at the Green Dragon, featuring the raffle where everyone wins!!, the sumptuous veggie/vegan buffet, and of course the eco-disco (where punters bring their own tracks for the DJ to play - £1 per track) . Thanks to all those who came down, especially Noel Lynch and Romayne Phoenix.

Thanks also to DJ FLIP FLOP for helping out on the wheels of steel. As usual the party goers provided a diverse mix of music. I noted down some of the tracks during and after the event. Arguably, you'd be struggling to find a more eclectic playlist:

No ifs no buts - no public sector cuts