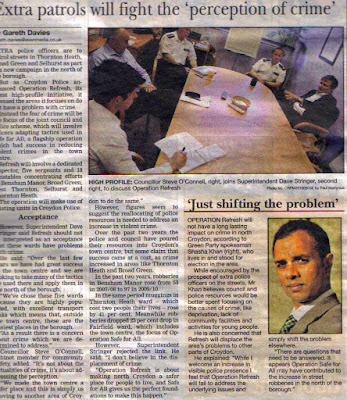 Croydon Police have announced their latest initiative: Operation Refresh. Refresh focusses on the wards of Thornton Heath, Selhurst, Bensham Manor, Broad Green and West Thornton. A dedicated inspector, five sergeants and eighteen constables will be deployed in to this area which has experienced an increase in street robberies. A report by the Croydon Advertiser notes that the spike in street robberies corresponds with a decrease of similar crimes in the town centre. Whatismore, in what appears to be a combination of breathtaking spin and unrivalled diplomacy, the local Superintendent regards the new initiative as a response to the "high population and excellent transport links."

My comments were reported in the Croydon Advertiser (above) and here (online).

"Whilst I welcome an increase in visible police presence, I feel that Operation Refresh will fail to address the underlying issues and simply shift the problem elsewhere.
It appears that Operation Safe For All may have contributed to the increase in street robberies in the north of the borough, something which might have been easily predicted. I'm also concerned a zero tolerance approach could create tensions between the community and the police." 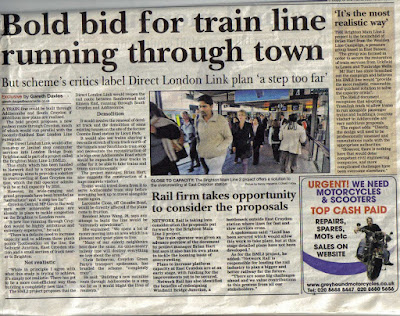 Link to online version with comment from Chris Sciberras.

At Saturday's local party meeting, Croydon Greens backed Chris Sciberras' take on the proposed BML2 line. On the surface it seems unusual that our local party would not be supporting another railway line. In principle we support increases in capacity for public transport - of course we do. However, it is a question of priorities.

Network Rail plans to build a new mainline railway running from Sanderstead through Addiscombe to join up with the Elmers End to London Bridge line. This would form part of the proposed BML2, an alternative rail route from London to Brighton.

However, the proposals as they stand would mean reconstructing of part of the Croydon tram network, demolishing some houses and blighting the lives of thousands of Croydon residents especially in Addiscombe where a high level bridge would be built above the tram tracks.

Instead Croydon Green Party calls for improvements to expand the capacity of East Croydon by the addition of more platforms and a redesign of Windmill Junction to be priortised.

The BML2 proposals were unearthed by Chris Sciberras, transport spokesperson for Croydon Green Party, who passed the details on to the Croydon Advertiser. Chris added: ‘Surely Croydon Council should take an active role in planning Croydon’s future transport needs. With big decisions on the development of the East Croydon site due shortly, can we really afford to have a Council sleeping on the job?’

A montage from the recent Thornton Heath Festival. It can also be viewed here 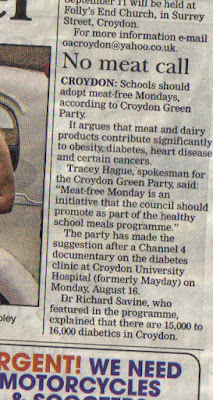 Letter on MP Richard Ottoway's comments on the War in Afghanistan

The comment made by Croydon South MP Richard Ottoway, the new Chairman of the Foreign Affairs Select Committee (see here), has triggered this letter from Gordon.

I was interested to read MP Richard Ottoway’s comments on the War in , describing it as “initially successful”.

With 1,300 Afghan civilians killed so far this year, and over 300 British troops killed since 2001; we have to ask ourselves, how can this be described as a success?

Is our military presence there making a bad situation worse? I believe so.

I’m not alone in thinking this; former generals and UN officials are among those calling for foreign forces to leave .

NATO air raids and missile strikes have killed and injured countless civilians. Our military presence is making things worse, not better. Every time NATO kills some more Afghan civilians, it fuels the insurgency, and makes us less safe in .

Yes, it is a good thing that we drove the Taliban out of government, but what now?

It is understood that a purely military solution to this conflict is not possible.

We will have to have a political solution involving all parties in .

The sooner we pull or troops out and work for a regional peace conference the better.

Trying to impose our system of government and democracy on the Afghans is unrealistic and counter productive. Let the Afghans sort out their own affairs.

I would ask people to write to their MP ahead of the September 9th vote on , and urge them to vote for the immiediate withdrawal of British troops from .