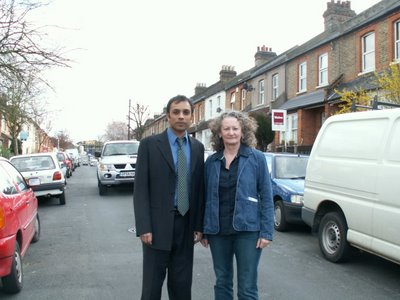 Shasha Khan said, “Due to the narrow road and limited car parking spaces, it is impossible for vehicles to pass on the street. One night recently a local resident counted more than 20 vehicles lined up in a ‘Mexican standoff’ on the road.”


Jenny Jones added, “Streets should be for the people who live there, with enough space for their needs, not for motorists who want to rat run to save a few minutes.”

“Home zones are often the answer for local people, slowing down the traffic to speeds where crossing the road becomes easy even for the slowest pedestrians, where children can play, and where the quality of life is improved for everyone.”
Posted by Shasha Khan at 10:57 am 1 comment: 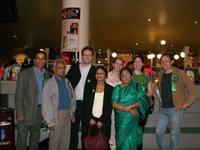 Letter in the Croydon Guardian

also in the same paper

Doing right by Crosfield
Posted by Mike at 2:59 pm No comments:

I have just dug up two Conservative newsletters that were circulated before the council election. I am not in the habit of keeping such literature, but after reading that the Conservative Leader has backtracked on his pledge to keep Crosfield open, I just had to remind myself what the Tories stated. One newsletter has a photograph of a group of protesters with the caption, “ Conservatives supporting Crosfield workers demonstrating outside the Town Hall”. The other newsletter lists the, ”Key election pledges”. At the top it says HONESTY followed by the statement, “People are sick of politicians promising one thing before an election and doing something else afterwards.” I am gobsmacked and disgusted. So many voters must feel cheated. It took less than two weeks to find out what this Council were about. The Conservative and Labour Parties think they are a law unto themselves. What is most galling, is that they are ‘U turning’ on an issue which affects one of the most vulnerable groups in the borough. Their leader, David Cameron, talks of social justice and compassionate conservatism. Well, if anybody was in any doubt, it’s the same old Tories – always cheating - and not an ounce of compassion in sight. Is it any wonder that so many voted for an alternative in the local elections? People want people to come first.

Tories Break Pledge to Save Crosfield

It didn't take long for the new Tory council to show their true colours.

"The Tories have been accused of giving the disabled Crosfield workers false hope with promises of reopening the Imperial Way factory if elected then going back on their word."

Vote blue get blue
Posted by Mike at 8:26 am No comments:

Nuclear Power? No Thanks!

Because it would be too expensive!

As Green Ladywell points out, it's time for a sticker revival.

Could the Greens win in the future?

Featured letter in this week's Croydon Guardian
Posted by Sutton & Croydon Greens at 8:01 am No comments:

The results of Thursday’s local council elections clearly show that the Green Party is now a real force in local politics.

Here in Croydon, several wards saw Green candidates poll more votes than their Labour and Liberal Democrat counterparts. In Upper Norwood ward, where the Party stood a full slate of candidates for the first time, the Greens polled an unprecedented 17 per cent of the vote. The result is even more significant in light of the massive amounts of money expended by the major parties in their local campaigns. The Green Party does not accept donations from multinational companies and relies instead on active members and supporters who want to improve quality of life for all.

Nationally, the Green Party reinforced its position as the fourth party. In London, the Party now has councillors in Lambeth, Southwark, Lewisham, Camden, Islington and Hackney. Candidate for Upper Norwood, Shasha Khan, said, "The public is turning to the only real alternative to the spin and sleaze of the Westminster parties. People do not want their local democracy turned into a theatre for 'cheque book politics'. The people of Croydon are fed up with the idea that decisions are going to the highest bidder.

I would like to thank everyone who voted Green and re-assure them that, for our party at least, democracy does not start and end at election time. We shall continue to work with local residents and campaign for action – not meaningless party ‘spin’ - on local issues. The election result has shown, both nationally and locally, that the Green Party is now a real force in local politics. In Croydon we’re here to for the long-term.

Our record speaks for itself - wherever Green councillors are voted in, the public see the results and want more. Principled and dedicated Green councillors across the country will be working to improve local neighbourhoods, enhance local shops and services, promote health and protect the wider environment.”
Posted by Shasha Khan at 12:59 pm No comments:

Protesters display their nuclear reaction Mary Johnson and Shasha Khan say no to nuclear.
Story and photo from the Croydon Guardian

The Green Party stood a total of 19 candidates in 17 wards in Croydon.

These are Croydon Green Party's best ever borough council results.

In party terms we have moved from contesting 4th place with UKIP to getting double the UKIP vote and running neck and neck with the Lib Dems.

All positions are the party positions, all contested wards had 3 seats up for election.
Posted by Mike at 5:07 pm 2 comments:

With more than 5% of the vote in the Croydon Wards the Green party fought yet no council seats won, the first past the post voting system has handed control of Croydon Council to a party which less than 20% of the electorate voted for.

Elsewhere in London the Green Party made reasonable progress with a total gain of 20 seats.

At least the next London poll, for the GLA in 2007, will be using a form of proportional representation.
Posted by Sutton & Croydon Greens at 4:17 pm No comments: