Judicial Review is filed at The Royal Courts of Justice

On Thursday 24th April, the morning started with more conversations on the phone with Dave Pettener and Paul Pickering from the Stop The Incinerator campaign, as well as Sue Willman at Deighton Pierce Glynn. "Yes a campaign should file the papers in person and see it as a photo opportunity," she said.

I'd had a cough and cold for a few days - and felt I needed some rest, but more importantly I needed to catch up with paid work. So, I quickly rearranged my day, and in the afternoon I set off for the Royal Courts of Justice. Sue explained that it was 10 minutes walk from Charing Cross. I google imaged the building because the plan was to meet Katie, a clerk at Deighton Pierce Glynn, described by Sue as being "early 20s about 5 foot 8, black shoulder length hair", who would have the files that were to be submitted.

Unusually for me I was early (!!), and whilst I had and idea what the Royal Courts of Justice looked like, I'd been on many marches that passed by the building, I still wasn't properly prepared for the magnificence of the building. The importance of the moment, caught up with the history and tradition of the High Court created an unusual mixture of excitement and trepidation.


Katie arrived with the papers at 15:50pm. We had 40 minutes to file the judicial review. It seemed like ample time, but Katie knew we didn't have long because we first had to first pay the £60 fee at the cashiers office before actual filing the judicial review. We managed to pose for this photo in between paying the fee and submitting the files because at one point the easiest route seemed to be: to go back out and come back in.

The files that were submitted, known as the permission bundle, were in big blue lever arch files. The queue to to the Administrative Court was fairly lengthy. We just managed to get in before the doors were closed behind us at 4:30pm. As we submitted the file at the counter, the officer behind the window pointed out that the lever mechanism on one of the files was faulty. Unbelievably, she actually said she couldn't accept the file in  this condition. WOW! My jaw dropped! Katie quickly took back the the file and corrected the mechanism. Thankfully, it was accepted.


After a little while we were issued with a Judical Review claim form with the seal confirming receipt. Once that was in our hands we could relax. I had a chance to properly look around on the way out.

However, as we were leaving the building, I noticed my wallet was missing. After ten frantic minutes of emptying all my pockets and holdall on the edge of the main hall, I went to see security. They confirmed it had been found in the airport style security area. Upon entering the building the second time (in a hurry), as required, I had emptied all my pockets and placed my possessions in a large tray that went along the conveyor belt through the x-ray machine. Somehow my wallet fell out of the tray and went down the rollers at the end of the conveyor belt. Thankfully, one of the security officers noticed it.

So the picture of me outside the Royal Courts of me beaming, is partly because I had not lost my wallet!!

FRACKING: Not everyone agrees with our positon. 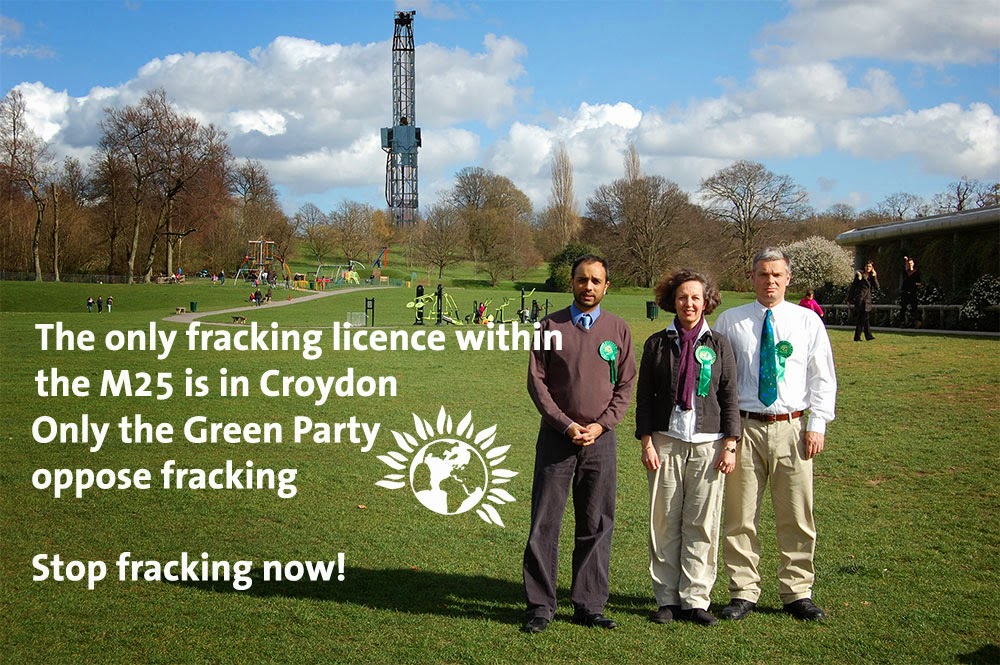 So we've spent many hours to produce the image above. First we assembled, then we posed, and then we did the post production, including purchasing the copyright of frack pad image. Many hours work. We got the idea from Lambeth Greens.

Just as local Greens are about to use the image, I spotted something hilarious. The gentleman furthest to the right in the background is indicating his displeasure, at our principled stance, by cupping his hand in the orthodox 'merchant banker' gesture - in our direction! We've decided to crop him in the finished version.

Tags croydon, greenparty
Posted by Shasha Khan at 10:16 am 2 comments:

Please click on and zoom in to read. The image is a high resolution so it can be enlarged. If not the text is below. THE GREEN PARTY - FOR THE COMMON GOOD 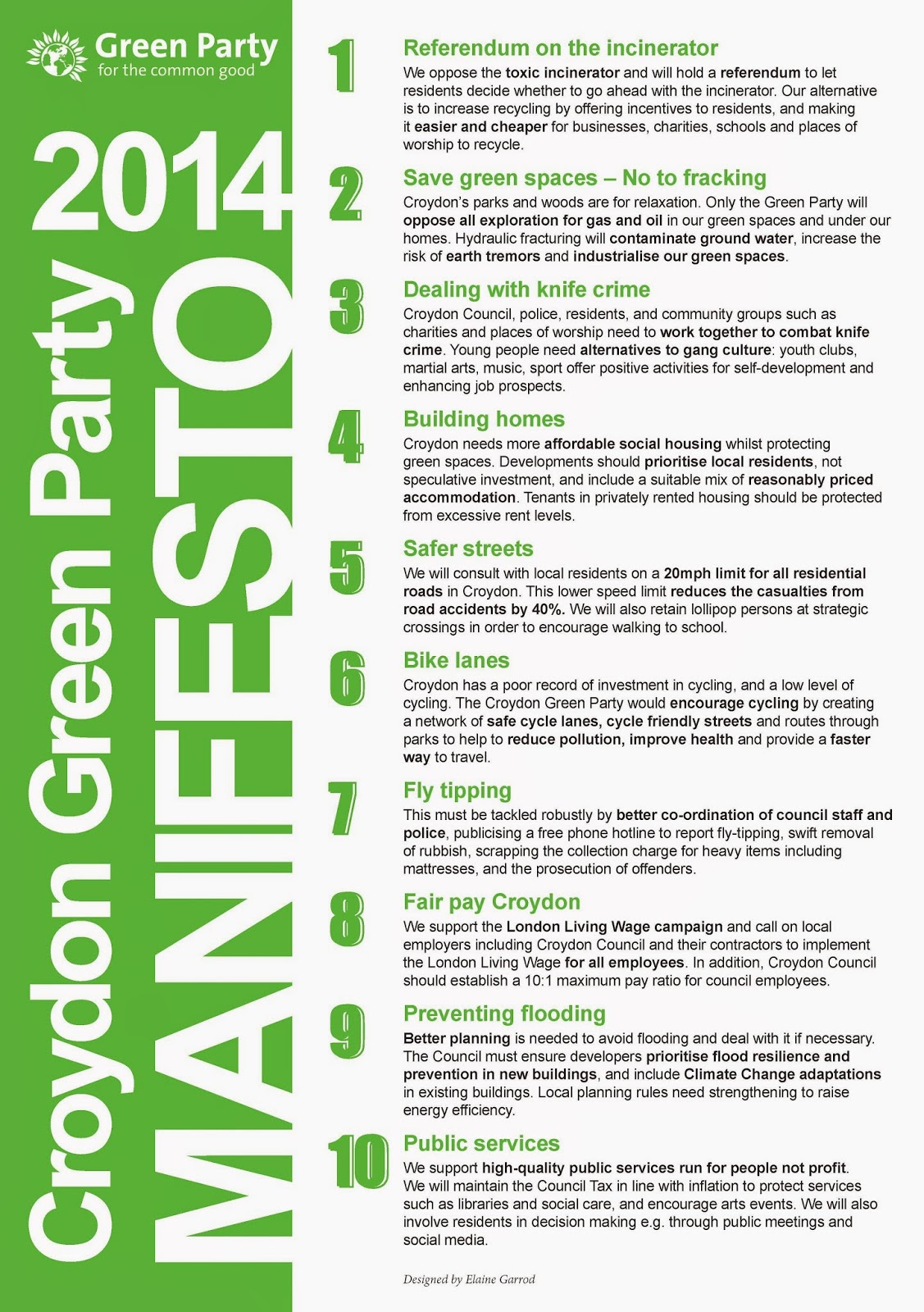 1/ Referendum on the incinerator
We oppose the toxic incinerator and will hold a referendum to let residents decide
whether to go ahead with the incinerator. Our alternative is to increase recycling
by offering incentives to residents, and making it easier and cheaper for businesses,
charities, schools and places of worship to recycle.
2/ Save green spaces – No to fracking
Croydon’s parks and woods are for relaxation. Only the Green Party will oppose
all exploration for gas and oil in our green spaces and under our homes. Hydraulic
fracturing will contaminate ground water, increase the risk of earth tremors and
industrialise our green spaces.
3/ Dealing with knife crime
Croydon Council, police, residents, and community groups such as charities and
churches need to work together to combat knife crime. Young people need
alternatives to gang culture: youth clubs, martial arts, music, sport offer positive
activities for self-development and enhancing job prospects
4/ Building homes
Croydon needs more affordable social housing whilst protecting green spaces.
Developments shouldprioritise local residents, not speculative investment, and
include a suitable mix of reasonably priced accommodation. Tenants in privately
rented housing should be protected from excessive rent levels.
5/ Safer streets
We will consult with local residents on a 20mph limit for all residential roads in
Croydon. This lower speed limit reduces the casualties from road accidents by
40%.We will also retain lollipop persons at strategic crossings in order to encourage
walking to school.
6/ Bike lanes
Croydon has a poor record of investment in cycling, and a low level of cycling.
The Croydon Green Party would encourage cycling by creating a network of
safe cyclelanes, cycle friendly streets and routes through parks to help to reduce
pollution, improve health and provide a faster way to travel.
7/ Fly tipping
This must be tackled robustly by better co-ordination of council staff and police,
publicising a free phone hotline to report fly-tipping, swift removal of rubbish,
scrapping the collectioncharge forheavy items including mattresses, and the prosecution
of offenders.
8/ Fair pay Croydon
We support the London Living Wage campaign and call on local employers including
Croydon Council and their contractors to implement the London Living Wage for all
employees. In addition, Croydon Council should establish a 10:1 maximum pay ratio for
council employees.
9/ Preventing flooding
Better planning is needed to avoid flooding and deal with it if necessary. The Council
must ensure developers prioritise flood resilience and prevention in new buildings, and
include Climate Change adaptations in existing buildings. Local planning rules need
strengthening to raise energy efficiency.
10/ Public services
We support high-quality public services run for people not profit. We will maintain the
Council Tax in line with inflation to protect services such as libraries and social care,
and encourage arts events.   We will also involve residents in decision making e.g. through
public meetings and social media.

Posted by Shasha Khan at 8:12 am No comments: