Croydon Green Party is delighted to announce that Gordon Ross has been selected to fight the parliamentary seat of Croydon South in the forthcoming general election. Mr Ross replaces Lewisham Councillor Sue Luxton, who decided to stand down after her initial selection in 2007.

“Gordon Ross is an excellent local candidate and I am delighted for him. Councillor Sue Luxton was initially selected for the Croydon South seat in 2007, around the time there was huge speculation that the Prime Minister would call an Autumn election in that year. Since then she has been working hard as the Campaign Manager for Chair of the London Assembly, Darren Johnson, as he attempts to win the seat of Lewisham Deptford, thus becoming London’s first Green Party MP. In fact, Darren’s odds have been slashed and he is now second favourite to win that constituency.”

Gordon lives in South Croydon, and works for a transport consultancy.

He is a graduate of the University of Dundee, and has worked in microbiology, design, and surveying.

Commenting on his selection, Gordon said:

"I think it is important that there is a Green Party candidate on the ballot. It gives people a chance to vote for a fairer society, and a party that’s principled on the environment.” 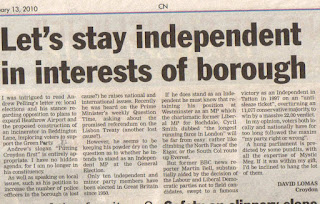 taken from the Croydon Guardian 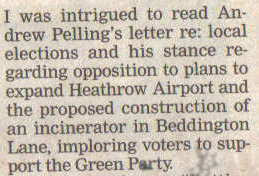 Mr Lomas also realises that the not so 'independent' MP, Andrew Pelling, appears to be leafing through the Green Party manifesto for policies.


I would like to thank each and every one of those 1200 residents who took the time to submit concerns and objections to the South London Waste Partnership regarding the proposed “waste management site”. As co-founder of the Stop The Incinerator campaign our intention was to raise awareness of the second stage consultation and draw attention to the likely outcome: a waste burner.

It appears we have had some success because your paper notes that there is a delay in the publication of the plan. The due date has been put back from February 2010 to the Autumn of 2010. One can only deduce that the sheer number of objections has put Croydon, Sutton, Merton and Kingston councils on the back foot, and cynically they have decided to hold back the proposals until after May’s local election. No doubt the location and the technology selected will provoke a backlash.

Unsurprisingly, the Secretary of State for Communities and Local Government – the Labour Government – is now pushing for the waste plan to be submitted in order to avoid EU fines. It is becoming clear that Labour doesn’t care if a health damaging incinerator is built to cut the waste sent to landfill, just so long as it avoids these fines. 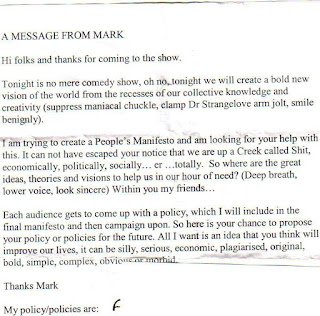 Mark Thomas came to Croydon last Thursday as part of his ‘Manifesto’ tour.

The audience on each leg of his tour gets a chance to select a policy which will go into his manifesto for the forthcoming general election.

So far the Manifesto has picked up some really quirky yet rational policies such as:

1. Anyone who supports ID cards should be banned from having curtains.

2. No one should be allowed a second home until everyone has a first home...

Those attending were invited to fill in the form. The Croydon Clocktower audience ended up with a shortlist of two:

1) Take down the signage at station which says, “Welcome to Croydon, Home of Nestle”

2) Citizens have the right to stop and search PCSO’s.

My choice (below) which didn’t get a mention was :-(

The great grandchildren of climate change deniers should be forcibly required to house environmental refugees if global temperatures rise above 5 degrees this century.

Interestingly, the chosen policy was the ‘stop and search’ one – which possibly says more about life experiences in Croydon.

Thornton Heath greenie, Andy Pag was arrested in India for using a satellite phone. The latest news is that he's out on bail.

His latest blog post has more detail about his situation. To be honest it's a tough read.

Andy Pag is four months into a round-the-world trip in a bus fuelled by chip fat. I met him the day he was scheduled to leave Croydon. I was taken by his determination and his mission to take the climate change message to the world. He is a one in a million.

Croydon Greens are thinking of you.

In Peabody we trust 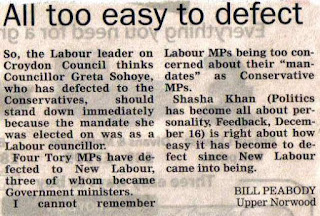 The first 'Feedback' page this year in the Croydon Guardian had the above letter from Bill Peabody. I am sensing that Greta Sohoye's defection to the Conservatives is not really a surprise in an era of career politicians and Mr Peabody endorses my point.

Passion for the Planet 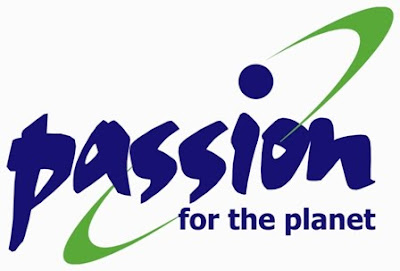 Passion for the Planet is a DAB radio station that, " plays your favourite songs plus great new tunes from world music artists, and a broad range of interviews and features focused on your health and environment - issues that affect our lives every day."

I was recently interviewed by Chantal Cooke, the station's founder and director. The topic under discussion was 'incineration'. Chantal told me that Caroline Lucas, Darren Johnson and Jenny Jones had all previously appeared on the station. We like radio stations like this! Check it out:

Interviews are broadcast on rotation. You'll see what I mean when you tune in.

Labels: passion for the planet

Thornton Heath Rec gets a share of the pot 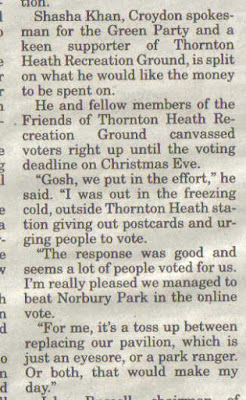 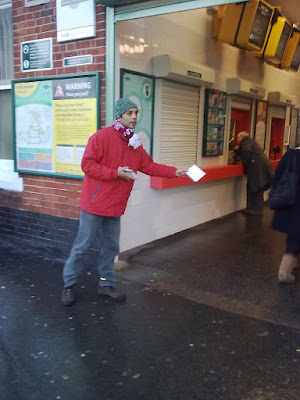 Croydon Council has done that thing again where it does something unexplainable, leaving one to try work out why its happened.

Everyone involved in the Parks to be proud of competition was told six parks (two each from the north, centre and south of the borough) were to be chosen across the borough to share the £1.5m. With one day to go before the closing date, Thornton Heath Recreation Ground, for which I am Treasurer of the 'Friends group', was behind Norbury Park in the North section. Our managing committee made a final push to ensure we came in the top two.

I stood outside Thornton Heath station in freezing temperatures urging commuters to vote for our local park. The results show that Thornton Heath Recreation Ground and Wandle Park finished in the top two spots in the North. However, the council in their wisdom have now decided to stretch the £1.5m between 9 parks, and yes Norbury Park is also going to get a share. It appears the council wanted to invest money in certain parks which didn't finish in the top two in the respective sections. So what do they do?? CHANGE THE RULES! Although I am pleased for all the parks that won a share, and commiserations to those that missed out, I for one will be watching closely how the money is allocated!!!

On January 1st I heard on the radio that a man had been shot dead just around the corner in Queens Road at the Newton Arms pub. Soon after I heard the name of the dead man: Darren Deslandes. The name at that point hadn't clicked.

Then a couple of days ago I checked the Croydon Advertiser web site and saw a picture of the man who was murdered at the Newton Arms, and instantly I recognised him.

I've known Darren since he was 10. I didn't know him very well, but well enough to say "hi" and have a catch up if we happened to bump into each other. He was a decent man, with a regular job, in a loving family.

The sad fact is this: because this incident involves a black man killing another black man within an area of relative poverty, it doesn't carry the same coverage in the national media as other murders.


My abiding memory of Darren:

The 1984 Olympics in Los Angeles caught the imagination of Darren, myself and a few other local youngsters who lived off Brigstock Road/Nutfield Road in Thornton Heath. We had our own neighbourhood athletics tournament on the streets; 100m, 200m, 400m, 800m, long jump. I remember Darren being a pretty good sprinter even though he was younger than the rest of us.

My thoughts are with his brother who was also shot and his family. 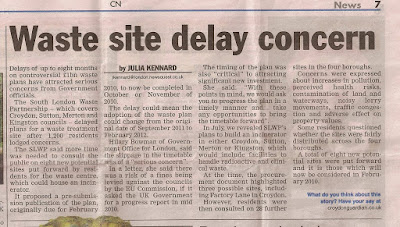 This news came out in Christmas week! How cynical: send out embarrassing news when everyone is preoccupied. It seems our awareness raising campaign has had some success. The South London Waste Partnership (the councils of Croydon, Sutton, Merton and Kingston) have tripped up over their own sham consultation. Clearly they were not expecting so many objections.

In a recent letter to the Croydon Advertiser, the independent Croydon Central MP Andrew Pelling pointed out that Labour were planning to target Green voters in Croydon Central. He rightfully highlighted that Labour were in no position to lecture the Tories on their environmental credentials when they themselves plan to expand Heathrow. He also noted that the Conservative council could not claim to be green if in the same breath they were pushing ahead with an incinerator which would "poison our lungs". However, Pelling is just as guilty to go after the green votes in Croydon Central and his campaign - although he still hasn't declared his intention to stand - is designed to attract Green voters; but just how can voting independent or a collection of independents (for council) ensure a greener Croydon??

hello! Hello! HELLO!!!!! Surely the only way to get green is to 'VOTE GREEN!' as Bernice Golberg explains:

I was interested to read that Andrew Pelling wants "greener choices available in any Croydon election" (Advertiser 18th December 2009). I can assure both him and the rest of the Croydon electorate that the greenest choices will be provided by the Green Party in the forthcoming elections in 2010.
It is all very well independent candidates being able to vote for or against the proposals of the party in power, according to personal preference, but a collection of independents is not going to challenge the stale two party system.
Without a coherent set of policies how is the electorate to know what they actually stand for? What new ideas do they bring? Or will they just vote yes or no on the same old proposals brought out by the same old ministers?
Compared with the Green Party's joined up thinking on ensuring fairness in matters of health, education and the economy (in addition to environmental issues), independent candidates would seem to have little to offer. 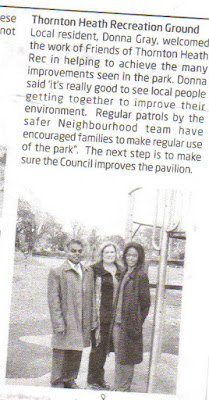 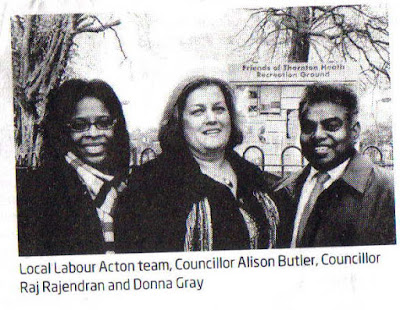 I've been receiving disbelieving texts from local residents who have just read the latest Bensham Manor ward leaflet circulated by the Labour Party. The texts are punctuated with exclamation marks and emoticons depicting laughter because the senders are astounded to see the Labour team pictured in front of the Friends of Thornton Heath Recreation Ground (FoTHRG) noticeboard.

Anyhow, I'd like to take this opportunity to thank the "local Labour Action team" for highlighting the work and achievements of the FoTHRG. However, it would have been nice if they had credited yours truly for founding FoTHRG in 2007.

Note: The 'friends' group was formed because residents realised that Labour had taken votes for granted and treated the park as low priority; this was because it was in a safe Labour ward. Back in 2006 I was told by local police that there was organised pit bull fighting at the park, such was the neglect. Thankfully, those days are long gone.