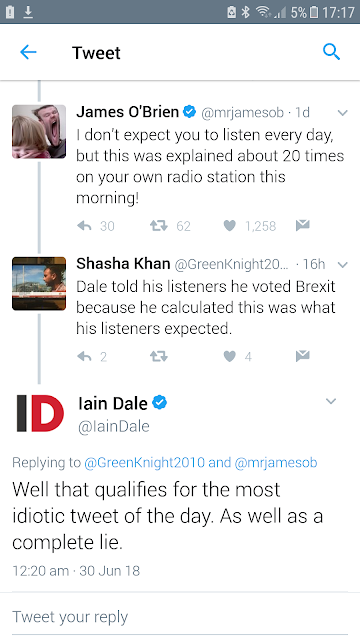 The result in Beddington North was quite a surprise to many observers. Councillor Nick Mattey, formerly a Liberal Democrat, latterly a Green managed to get re-elected as an Independent with two other councillors. This news also managed to get into Private Eye magazine (above). 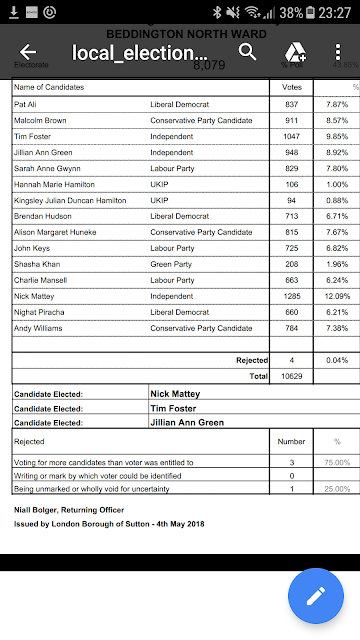 I chatted to Nick Mattey (his graphic above - poor spelling of my name) throughout the campaign. Our involvement in the Stop The Incinerator campaign has resulted in a friendship.

Independents getting elected in London is an amazing phenomenon. However, the election of these three in Beddington North was not a complete surprise:

1) Nick Mattey has been an active councillor in Beddington North. People know him. He has fully canvassed the households in the ward. If he wasn't a sitting councillor it would have been almost impossible to achieve success.

2) The Lib Dems in Sutton are serial leafleters around election time. Nick managed to orchastrate a campaign which exceeded the Lib Dems in terms of sheer volume and cost. I know he spoke to the Electoral Commission to work out how he could spend his way to success.

3) Voters are cynical about politicians more than ever before. Voters are learning that voting for a political party doesn't mean 'X'. It could mean 'Y'. For example, if you are a BREXIT voter, which political party represents your voice? The people of Beddington North have experienced deceit on an unprecedented scale. It was logical to turn to three residents who, total combined, have lived in the ward for many decades.

The 1.96 per cent votes I polled was to be expected given Green votes were probably going to the three Independents. This coupled with the fact that I don't actually live in the borough and both Labour and the Conservatives threw everything at the ward to win these three vulnerable Lib Dem seats suggests the result was fair.  On average Green candidates polled between 2 and 3 per cent in Sutton.

I took the above picture at the Count. Nick Mattey is in the foreground. You can see the other tables have finished counting but because of the Independents - bundled in with the split votes - the counting continued long after other wards had declared.


The result in Chipstead, Hooley and Woodmansterne was completely expected. The Tory won by landslide. Interestingly less than 100 votes separated the other candidates.

Scoring a similar margin of victory to the Conservative was the irrepressible Jonathan Essex in Redhill East ward. He is one of the legends in the UK Green party. More good news was the election of Hal Brown in Earlswood and Whitebushes. Full details here. 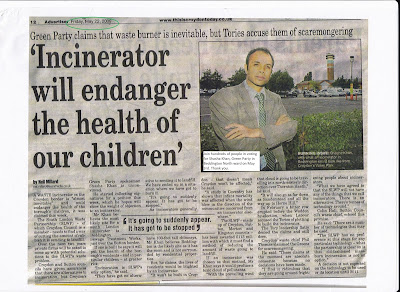 
I can't begin to explain how sad this image makes me feel.