Today, President of Zimbabwe Robert Mugabe resigned. Here is his letter of resignation.

In early 2003, I arranged to see my then MP, the late Malcolm Wicks - MP for Croydon North. At the time I was stunned to see the UK join the US in invading Iraq. Sitting on a huge majority and as minister, Wicks did what was expected of him and supported the war in Iraq. It incensed me enough to focus my #GE2005 campaign on his unequivocal support of the invasion. 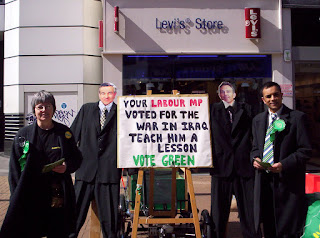 
After speaking to the Electoral Commission, I can confirm they have advised me that there is no course of action I can take BUT they have made a note of what happened in Sutton on the night of the count.

In short:
London Borough of Sutton Council, CEO, Niall Bolger protected Lib Dem Tom Brake from embarrassment at the General Election Count in 2017. He did this by choosing not to allow candidates on stage for the declaration.

Why did he do this?
Because he was concerned there was going to be a demonstration on live TV and I will assert this was a contributing factor:

Why is this important?
There is a democratic tradition to allow Mr Fishfinger or Lord Buckethead to heap ridicule on any politician. However, Niall Bolger, Sutton CEO, and thus the Returning Officer for the election, is allowed to run the Declaration as he pleases. Knowing he is knee deep in involvement with the incinerator, along with Tom Brake and Cllr Ruth Dombey, he chose not uphold the democratic tradition of this country, and to avoid any embarrassment on national TV.  Furthermore, however outrageous a notion, is it possible that Niall Bolger would magically make some opposition ballot papers disappear to ensure victory for his Lib Dem allies? One very senior candidate complained that Tom Brake knew the result of this marginal seat (Carshalton and Wallington) before any other candidates.


I spoke to the Electoral Commission after receiving a reply from Local Government Ombudsman. The Electoral Commission advised me that there are a number of powers which are handed to the Returning Officer, including the Declaration, when organising elections. For example, if he wanted to introduce the winner on stage with a drum roll and indoor fireworks he is entitled to do so. Presumably, he can let a favoured candidate know the result before others.

The local Governement Ombudsman (LGO) was called in after I had reached deadlock with the council (see further down). LGO's reply:

I have considered what Mr Y said in his complaint.


What I found Mr Y was a candidate in the last general election and complains the Council decided not to allow candidates on stage when the declaration of the result was announced.


Mr Y feels he should have been allowed to stand on stage and feels he was denied this right.


The Returning Officer is responsible for organising elections. In this role, the Returning Officer works independently and not on behalf of the Council. The Ombudsman has no legal jurisdiction therefore to investigate complaints about the organisation of elections. This includes how the result was announced.


Final decision: We have no legal remit to investigate the organisation of elections and so cannot investigate Mr Y’s complaint.


Investigator’s decision on behalf of the Ombudsman


"In recent times, candidates have not stood on the stage at Sutton when the counts have been announced".


WRONG!!! At the previous General Election, candidates were allowed, and he allowed it.

When I complained to the council, I was assured by the Head of Electoral Services that the decision was not political and an entirely different explanation was proffered:

Sutton were not alone in not asking candidates to stand on the stage - Merton and Croydon did the same. House keeping that seems relevant - I am not sure whether you attended the 2015 count in Sutton, you would have noted that we managed to add two extra teams meaning that the stage was smaller - the main reason for this is that we ran the count as mini counts in wards and we have 18 wards - this meant that we finished almost 2 hours earlier this year.  With this in mind I for future need to re-arrange my count floor so the stage remains a decent size and there is room to move at the front of the hall - you will have noted how cramped it was which is why we removed tables at the end.  The decision taken not to invite candidates was not political or for the reasons the article and tweets implied.

Just to add, on the night of the Count, the Declaration for Sutton and Cheam constituency was called about an hour before Carshalton and Wallington. I noticed immediately that only the victor was called up on stage. I immediately went to the Head of Electoral Services and asked if all the candidates would be allowed on stage for the Declaration for Carshalton & Wallington. I was pointed in the direction of Niall Bolger. The Head of Electoral Services did not offer the explanation of the 'smaller stage' as per the reply to my complaint, and instead indicated that the CEO could allow it. I walked up to Niall Bolger, and in the rudest manner imaginable he said:

"NO! I have made my decision," and then walked off.