The current edition of Croydon Guardian has photo of mine in Viewfinder: 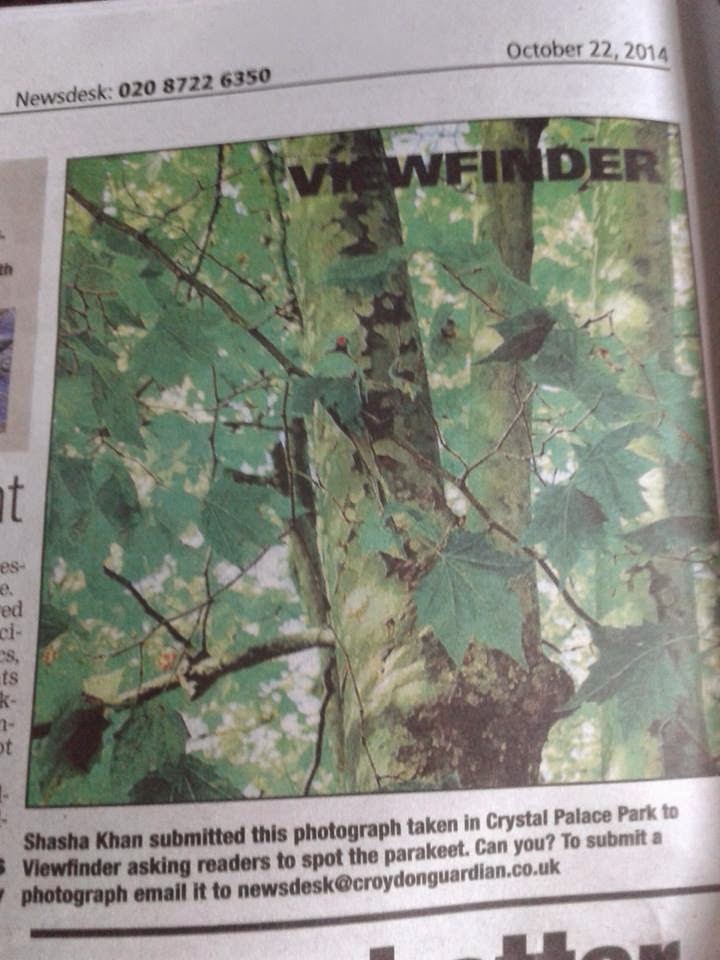 Viewfinder is on the letters page. On this page is a letter from Nia (The Lois Project). She writes about Broad Green being "choked with the amount of flats being built." This got me thinking again about the response I received at Public Question Time earlier this month:

Cabinet Member for Homes and Regeneration


The new administration is committed to the regeneration of the London Road/Broad Green area. As local planning authority the Council are required in law to consider any scheme on its individual merits in line with the London Plan and the Croydon Local Plan and any other material planning considerations.

I find a good way to let off steam about politicians seemingly saying one thing but doing another is to write a letter. I've just sent this to the Croydon Guardian:

I completely agree with The Lois Project [Residents should be consulted over plans for more buildings], West Croydon, Broad Green in particular is being overdeveloped at an astonishing pace, with little thought for the quality of life for those living here.

Interestingly, Broad Green Labour councillor Stuart Collins is not oblivious to the situation. At the Broad Green hustings, just before the May local elections, he advised those present that he had been calling on the Conservative administration to impose a “moratorium” on all new development in Broad Green until an infrastructure review had been carried out. Everyone in the room supported him.

Now that Labour controls the council, surely we can look forward to a moratorium on Broad Green development? I am afraid not. At a recent Croydon Council Public Question Time I asked about the moratorium, and the response was “the new administration is committed to the regeneration of the Broad Green area.” For “regeneration” read overdevelopment.

Those attending that Broad Green hustings have a right to feel disappointed with Councillor Collins.

Today, Croydon Green Party declared that Shasha Khan, Esther Sutton, and Peter Underwood have been selected to stand as Prospective Parliamentary Candidates (PPCs) in Croydon North, Croydon Central and Croydon South respectively.
The Green Party’s share in opinion polls has been rising steadily and is currently polling 8 per cent nationally (1), one per cent more than the Lib Dems. In what has been described as the #greensurge, membership is presently increasing by 1000 per week. In the local elections earlier this year Greens fielded a full slate of 70 candidates across the borough polling well over 20,000 votes.

Shasha Khan – Croydon North
Shasha has lived in the constituency since 1982, He is 42 and married with one daughter He has a Politics and Economics degree from University of Wolverhampton. Over the years he has worked as youth worker, Diverse London Ambassador and presently, he is a hotelier. He is the co-coordinator of the Croydon Green Party.
He has been involved in multiple local campaigns for many years. In particular the Stop The Incinerator campaign, Friends of Thornton Heath Recreation Ground (which he founded) and Croydon Save Our Schools.
Shasha Khan said, “The General Election in 2015 will be the fourth time I'll be standing in Croydon North (2). The track record I have of serving, protecting and improving the community I live in is a good indicator to what people can expect if they elect me as their MP.”

Esther Sutton – Croydon Central
Award winning (3) local businesswoman Esther Sutton, 41, has lived in Croydon nearly all her life. She lives in the constituency and coincidentally is a former classmate of Sarah Jones the Labour PPC (4). She is a single mother of two and both her children are at Croydon schools.
In 2013 Esther's ability to inspire and enrich the lives of others was recognised by a national newspaper.(5)
Through her involvement with Croydon Old Town Business Association, Croydon Portas Pilot project, Croydon Pubwatch and Croydon BID she is well known in the business community.
She was involved in the recent “Are You Safe?” anti-domestic abuse campaign in Croydon and is on the Local Alcohol Action Area steering group. In 2013
Esther Sutton said, “I believe The Green Party is the only real alternative, and the only party with robust policies on social justice and the environment. I am looking forward to spreading the word, attracting votes as I go, to win this marginal seat.”

Peter Underwood – Croydon South
Campaigner Peter Underwood ,43, has lived in the constituency for over 12 years. He currently works as the Warden of South Norwood Country Park, helping local primary schools and residents to appreciate the natural world on their doorstep.
Peter moved to London after university and he spent a number of years working in the civil service: initially in the Benefits Agency, then DWP policy and parliamentary teams before moving over to renewable energy policy in DECC.
He is the current chair Croydon Friends of the Earth and a committee member of both the Friends of Littleheath Woods and the Selsdon Residents Association.

Peter Underwood said, “I am very pleased to be selected by local Green Party members as a candidate for the General Election. Voters in Croydon South are being ignored by the other parties - they assume that people will just vote the same way that they always have. I believe that people are looking for a change and the Green Party provides a positive and sensible set of polices for the future. I hope that the people of Croydon South will help make history by electing me as one of the new Green Party MPs at the upcoming election.”

TV DEBATES. Do you agree with Dave from Watford?

Spontaneously, petitions and suggestions of action were being circulated on social media. One of the first I read was to telephone OFCOM. I did this . I must have been one of the first because the agent didn't know about the proposal from BBC, ITV, SKYNews and Channel 4. He advised that he couldn't take the complaint for BBC but would send the complaint to the other three stations and the Contents and Standards Team will post on the OFCOM web site if there indeed is a breach of code.

There are possibly three reasons why the Greens are being excluded:

1) A combination of position in the polls, elected MPs and by-election results.
2) Conducting a debate with five candidates is not conducive to good TV or easily manageable*
3) "The powers that be do not want the Green Party message to be heard." Something that Dave from Watford thinks on the radio phone-in vid.

* Darren Johnson AM has suggested this format if he were in charge - which is fair:

Truth serum definitely needs to go into the drinking water


I have long felt that Croydon is being held back by the tribal nature of the political discourse in our borough. Through custom and habit, probably 3/4 of the electorate file outside their homes on election day to put an 'X' by their party for life. Policies are secondary. The adversarial style of our democracy cements the idea that you had better plump for the usual because the other lot could get in.

The only way to truly stop this from happening is to start afresh with a whole new set of political parties or to find a way to stop people voting in this tribal fashion. If the electorate somehow forgot who they had voted for in the past, maybe that would stop this tribalism. So, when I saw that Croydon Citizen were running a feature on how could Croydon be improved, I came up with the truth serum idea:


I would make Croydon better by releasing a de-tribalising truth serum into the drinking water so that the Croydon electorate will forget who they continuously vote for, for no other reason than custom and habit. This will result in voters having to use websites like ‘Political Compass’ to guide them on who they should vote for. The outcome would be real change and real progress because the political parties and politicians elected would actually have a vision for a better Croydon, instead of business as usual.

By chance the following week my wife was sent a link to Vote for Policies via Facebook. A small number of web sites are offering what can loosely be described as tests to aid individuals on which party to vote for. Vote for Policies seems to be leading the way. Thankfully she didn't end up with UKIP.

I checked out the Vote for Policies web site today. Prominent Greens have been tweeting about the fact that 25 per cent of those completing the survey are advised they really support the Green Party. An additional feature gives you the results based on constituency. Naturally, I entered Croydon North: