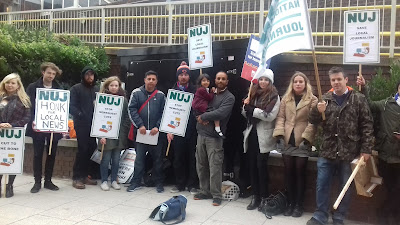 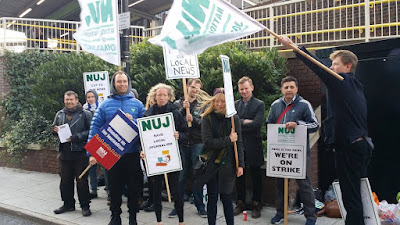 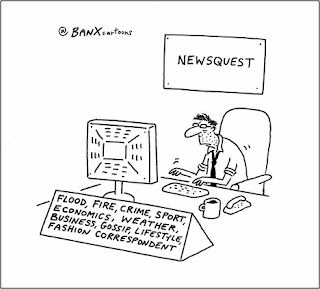 Over the last couple of weeks, Jason Lemin, Maeve Tomlinson and I have visited the picket line opposite Quadrant House in Sutton which also happens to be the pick up/drop off point at Sutton Railway station.

Newsquest (owned by US media giant Gannett) is the second largest publisher of regional and local newspapers in the UK. It has editions all over South London from Bexley to Richmond. The publisher has put its entire south London newsroom on notice of redundancy. Newsquest want 12 reporters and one content editor to produce 11 newspapers and their related websites. (see NUJ web site for more information)

I spoke at length to reporter Chris Caulfield when I visited the picket line. Incredibly, Newsquest aim to reduce the journalistic spend on each page of its publications to £50. Given it can make thousands of pounds through advertising per page, this smacks of overzealous profiteering. Admittedly, this might bump Gannet's share price or make Newsquest an attractive proposition for purchase BUT, this ignores the vital role local and regional newspapers play in holding councillors to account. Cutting reporters at our local papers is like cutting the oxygen of accountability that helps our local democracy breathe.


In addition to these terrible job losses, and let's be clear striking is the last resort for all the newsdesk staff, I am really worried about how knowledge of any corrupt activity by Croydon, Sutton or Surrey council will find its way to the electorate.

This whole episode reminds me of a twitter spat between Gareth Davies and his former bosses at the Croydon Advertiser (read Inside Croydon). Gareth Davies over the years, like Chris Caulfield, reported extensively on the incinerator. However, it was only when he had left the Croydon Advertiser (owned by Trinty Mirror), was he really able to let rip on his former bosses about the cutbacks and redundancies.

I have also written to Newsquest boss Henry Faure Walker - who seemed to be answering incoming calls when I rang the newsdesk last week:

I write to you today to reconsider Newsquest's corporate strategy of cutting the number of reporters and to put its entire south London newsroom on notice of redundancy.

Over the last 13 years I have got to know many of the reporters at the Croydon Guardian and Sutton Guardian. This is principally through my community activism. In 2013 I took the big step of challenging Sutton Council in the High Court to stop the commencement of construction of the South London incinerator. I can honestly say that without the coverage in Newsquests papers' I would have struggled to raise the funds to even get to the High Court.

Additionally, such was the complicated nature of the High Court challenge, I am concerned that a single reporter covering a whole edition would struggle to report on such a case. At the time your reporter, Chris Caulfield, was able to attend the trial to see and hear the arguments put before the judge at the Royal Courts of Justice first-hand.

In my opinion, Newsquest are risking its position as brand leader in South London because there are already community based news sites like Inside Croydon providing excellent investigative reporting, and dumbing down the quality of its publications will only affect Newsquests footing and eventually its advertising revenue.

Tags croydon, greenparty
Posted by Shasha Khan at 11:11 am 2 comments: