Important letter which didn't get published on school closures 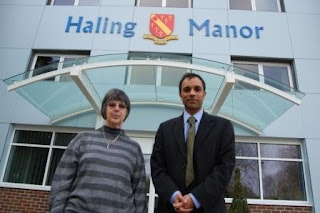 The Secondary Schools Review is a glaring reminder of how undemocratic central government and local government can be.

If you consider the academisation of schools in Croydon, both Labour and the Conservatives are in favour of handing over schools to unaccountable private businesses and faith groups. Despite overwhelming opposition during the informal consultation, scrutiny committee meeting and emergency full council meeting, the voices of parents, teachers and pupils are simply not being heard.

Any attempts by Labour to represent the objecting voices are dismissed by the Conservatives as being opportunistic because Labour Minsters, Jim Knight and Ed Balls, agree with the proposals, wholeheartedly. This demonstrates how the absence of a principled opposition is jamming the effectiveness of the council.

The statutory consultation runs from 27th February to 9th April. However, it was only Friday 13th March that the meeting dates were formerly announced! We should have an opposition that can take the Conservative council to task over this mockery of a consultation.

Unbelievably, in other areas of the country, it is Labour who is putting forward proposals to close schools and reopen them as academies, resulting in Conservative oppositions’ objecting to the proposals!

In the foreseeable future there will be more instances in Croydon where those affected will come to realise how their valid views can be dismissed. The building of an incinerator could be the next issue fitting this pattern and it could be a community near you that it will affect.

As long as there is the width of a cigarette paper between the two main parties, it is up to local communities to rally around an issue to form the genuine opposition. Please go along to the consultation meetings listed below: 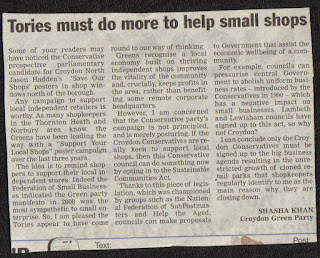 The text of the letter is below. Please support our petition regarding Sustainable Communities Act

A few of your readers may have noticed the Conservative PPC for Croydon North’s ‘Save Our Shops’ posters in shop windows north of the borough. Any campaign to support local independent retailers is worthy. As many shopkeepers in the Thornton Heath and Norbury area know, the Greens have been leading the way with a “Support Your Local Shops” poster campaign over the last three years. The idea is to remind shoppers to support their local independent stores. Indeed the Federation of Small Businesses indicated that the Green party manifesto in 2008 was the most sympathetic to small enterprise. So, I am pleased the Tories appear to have come round to our way of thinking.

Greens recognise that a local economy built on thriving independent shops improves the vitality of the community and crucially keeps profits in the area, rather than benefiting some remote corporate headquarters.

However, I am concerned that the Conservative party’s campaign is not principled and merely posturing. If the Croydon Conservatives are really keen to support local shops then this Conservative council can do something right now by ‘opting in’ to the Sustainable Communities Act.

Thanks to this piece of legislation, which was championed by groups such as the National Federation of Postmasters and Help the Aged, councils can put forward proposals to government which assist the economic wellbeing of a community.

For example, councils can pressurise central government to abolish uniform business rates – coincidentally introduced by the Conservatives in 1990 – which has a negative impact on small businesses. Lambeth and Lewisham councils have signed up to this Act, so why not Croydon?

I can only conclude that the Croydon Conservatives must be ‘signed up’ to the big business agenda resulting in the unrestricted growth of supermarkets and cloned retail parks which shopkeepers regularly identify to me as the main reason why they are closing down. 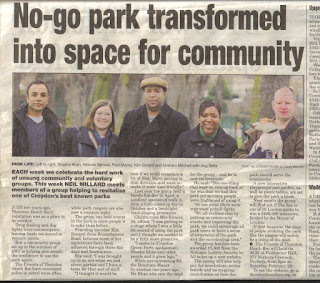 Many residents in Thornton Heath know that the Friends of Thornton Heath Recreation Ground came about from yours truly knocking on doors to find out what concerns they had. This process helped me understand that some families didn't feel safe using the park. The 'rec', as it is affectionately known, was the place I used 'hang out' when I was 11 years old. Many summers were spent playing football and cricket there.

Thankfully, doorstep encounters with some fantastically driven community minded individuals ended up in the formation of a Friends of park group of which I am Treasurer. I am incredibly proud of my association with the group, especially when one considers all our achievements.

Our success hasn't gone unnoticed because the Croydon Advertiser ran a feature on our group - one that the Labour MP Malcolm Wicks certainly noticed because he promptly invited himself to the AGM. A couple of weeks later he next posts a video on You Tube doing his best to connect himself with the Friends of Thornton Heath Recreation Ground. I should be annoyed by this cynical ploy but instead I am pleased because we have finally got the local MP to pay attention to the park - without our hard work he just wouldn't have been interested! 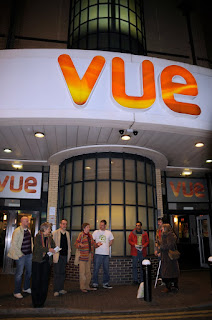 PRESS RELEASE
For Immediate Release: 16.03.09
MEMBERS OF CROYDON GREEN PARTY HELP BREAK THE WORLD RECORD FOR THE LARGEST EVER FILM PREMIERE.
Members of Croydon Green Party and other local green groups along with concerned individuals last night (15th March) attended the Peoples Premiere screening (at VUE Purley Way) of The Age of Stupid [1]. They joined cinemagoers in 65 other venues -creating a potential audience capacity of 16,000 - to achieve the world record feat via satellite link up.
Commenting on the film and world record achievement, Croydon Green Party spokesperson Shasha Khan said:
“Some of the audience in ‘Screen 1’ cheered when news came through that we had participated in a world record.
“However, ‘The Age of Stupid’ will be remembered as the film that conveyed the stark reality of what life will be like in 2055 if we don’t act to stop climate change now.”

The film is a docu-drama hybrid and features Oscar nominated Pete Postlethwaite as an old man living in the devastated world of 2055, watching actual archive footage from 2008 and asking: why didn’t we stop climate change when we had the chance.
Shasha Khan continued:
“Governments around the world have a duty to deliver at the next UN Climate Change conference in December 2009 [2] and the makers of this film hammered this point at the Peoples Première.

“The film is cleverly made using actual news footage and animation sequences to get the climate change message across in an easy to understand manner. I urge everyone to see it.”
Ends

Like many people last night I watched the 'BBC News at 10pm' with a sense of dejection as yet another report indicating catastrophic changes to the world's climate was revealed. The Independent has traditionally embraced the 'global warming' issue. Who can forget that run of stark front page headlines a couple of years ago. They need to step outside the box again and in the words of Spike Lee, "do the right thing...."

It shouldn't be a surprise that sea-levels are rising faster than expected (Independent 11.3.09). The observable pattern with scientific reports is that they continually reveal that climate change is more serious than we thought previously.

What is astonishing, on the other hand, is that all three big political parties in the UK fail to adopt the right targets, fail to pursue the full package of policies necessary to meet even their inadequate targets, and continue to pursue some policies that go in exactly the wrong direction. This is another observable pattern.

And another one is the way the bulk of the UK media manage to avoid spelling out the fact that there is still only one political party that has always had the right targets and the full range of policies needed to meet those targets in an economically viable and socially just manner. The public needs to know this. The public gets most of its information on matters like this most of the time via the mass media. In a democracy, this gives the media a significant responsibility.

So instead of just reporting on what must be done, and on the fact that it isn't being done, when are Britain's newspapers going to begin stating this simple fact: if you want the right action taken on the climate crisis, you're going to have to elect more Greens.

And the next opportunity is of course the European election on 4 June. The EU has a huge role to play on the world stage, and the need for more Green MEPs has never been greater. Will the Independent take the lead and acknowledge this?

At a recent Neighbourhood Partnership Meeting, it was revealed that Nitrogen Dioxide readings taken from the Air Quality Monitoring Station in Waddon had exceeded safe standards by up to 20% in the last 8 years.

“The targets are there for a reason. Over 1000 people die prematurely every year in London as a result of poor air quality, far more than die in traffic accidents. Air pollution is the invisible urban killer and central and local governments really must take action.

“In the light of these startling readings, it is hardly surprising that the UK Government plans to delay meeting new EU air quality targets [1].”

Nitrogen Dioxide is a respiratory irritant. There is evidence that exposure can increase the risk to children of respiratory infections and cause impairment of lung functions in later life.

Asthmatics and those suffering from emphysema and other breathing problems are thought to be especially sensitive to the levels of Nitrogen dioxide.

Shasha Khan continued:"In Waddon the fumes from motor vehicles have no doubt caused these high nitrogen dioxide readings. There is growing evidence that the actual death toll and illnesses caused by poor air quality is much higher. This is because there is a timelag before lung problems develop.”