I first met David Petro on Saturday 18th October 2008. I know the precise occasion because I have gone through my emails to recall the date. New to the party, he came to a Sutton and Croydon Green Party strategy meeting in Wallington organised by George Dow ( 2010 General Election candidate for Carshalton and Wallington). David came across as a shy man bursting to make constructive contributions on all the topics on the agenda.

For the next few weeks and months David became increasingly active in our local party and quickly became a part of the inner circle, for want of a better term. Within a short time he displayed a natural gift for politics and tremendous intellectual prowess, alongside a mastery of the English language. Arguably, he had the educational background that one traditionally associates with such attributes: Trinity School followed by Cambridge University.

I remember him describing politics as "dark arts," and he certainly had the strategic mind to navigate through our occasionally murky world. He was particularly good with regard to copy and text for communications. It was around this time he went for Green Party National Press Officer role, but sadly he didn't get an interview.

As is common, activists spend a lot of time with each other and this leads to friendships. Around the early party of 2009, I got to know David a bit more socially. He came around for dinner a couple of times and we watched DVDs that he recommended. One film that had passed me by, which we watched together, was Idiocricy. It is a cult classic that is a scarily accurate portrayal of the kind of world future generations will live in.


At the time Croydon Green Party didn't have a website, just this blog. David got to work on a professional website and looked after the design of our communications. He designed from scratch the first Croydon Green Party website. Below is a jpeg of the draft design for the homepage: 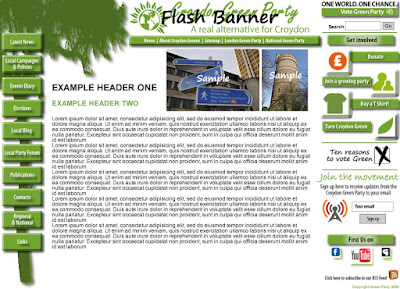 In February 2009, there was a by election in Waddon. David put together the design and much of the content for the leaflet below. 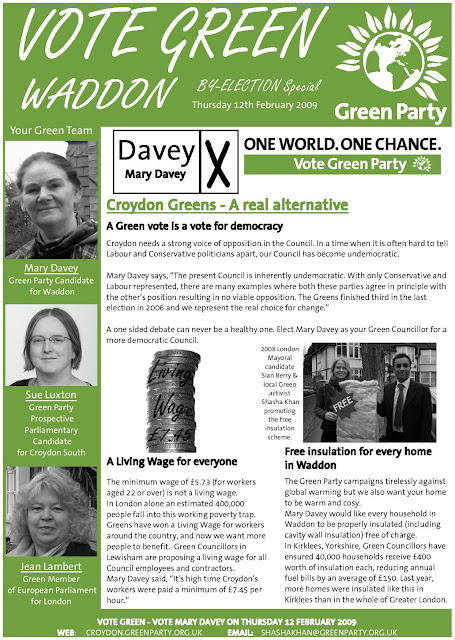 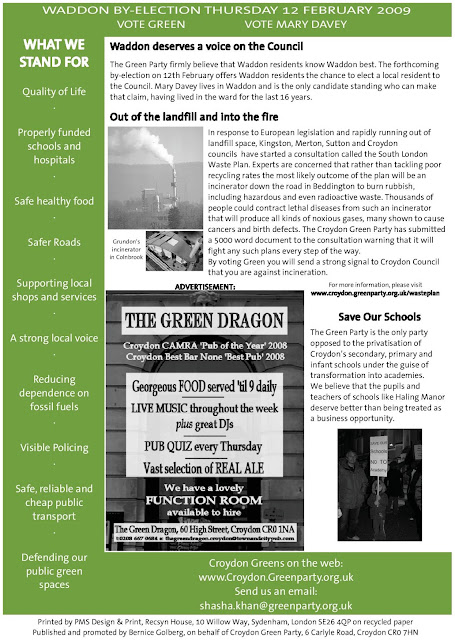 We soon got to realise that David was a fairly nocturnal operator. He slept most of the day and was up most of the night. This is symptomatic of those suffering from depression, and through 2009 he was less able to function as he would like to have done - due to this illness. That said, he still continued to help design leaflets, but he was less able to be otherwise involved in the local party. When asked to do design work for the party he would put 100 per cent time and effort into the job to ensure the best results. I once bumped into his dad in East Croydon and we chatted about David briefly and he described his son as a 'perfectionist'. David used to explain in his emails that he was only operating at 40 per cent due to his illness, but in actual fact his 40 per cent was perfectly fine.

The above Waddon leaflet was the very first time the word incinerator was mentioned in any communication by anyone. David got to grips with the whole issue and was integral in Sutton and Croydon Green Party submitting a 5000 word document to the very first consultation. He carefully selected, registered and purchased the domain: stoptheincinerator.co.uk - something which has helped boost the number of hits our campaign website has received. Incredibly, given the the dozens of campaigns in the UK, if one googles incinerator, the fourth listing that appears on the page is Stop The Incinerator. This is an example of his clever judgement. He designed and built the first Stop the Incinerator website which was still being used in 2013.

In the 2010 local elections in Croydon he stood in his home ward of Addiscombe and his brother stood in neighbouring Ashburton. He was very much involved in the design and content of all of the leaflets our party produced in 2009 and 2010 when we targeted Bensham Manor ward. It was with his help I nearly polled 1200 votes.

The last time I spoke to David was probably last summer, when he had thoughtfully nominated me for the Croydon Guardian Community Champion. The first I knew about it was when I got a phone call from the Croydon Guardian. I rang David to thank him. He figured the publicity would help the incinerator campaign. He also explained he had become a trustee of the Body Dysmorphic Disorder Foundation and was doing some work for them, including their website.We talked about meeting up sometime soon even though he indicated he was going through a difficult period.

A couple of weeks ago the Stop the Incinerator website went down. The site had disappeared and had been replaced with a message saying "account suspended".

Chair of the campaign, Paul Pickering, contacted me to say that he had sent an email to David because it appeared the domain needed renewing but he hadn't received a reply. I rang David's house and spoke to his brother, Sergio. He gave me the sad news that earlier this year his brother had taken his own life. Sergio explained that David had been struggling with his mental health from around the start of the year, but it was the Body Dysmorphic Disorder that had really got a hold on him. We talked about David, and Sergio pointed out that his brother was passionately committed to raising awareness about the little-known disorder and to helping sufferers.

It is tough for all of us in our local party who knew him to think that we will never see David again. He was a kind, generous and talented person who sadly suffered from a combination of mental health issues.

He enjoyed being involved in the party because, as he explained, he was with a group of people with whom he shared the same values.

Our thoughts are with his family.

*If you would like to know more about BDD please visit their web site  http://bddfoundation.org/*