On Wednesday last week I was contacted by the Croydon Advertiser to comment on remarks made by Croydon South MP, Richard 'Bombs Away' Ottaway.

Below is an actual extract from the speech that Richard 'Bombs Away' Ottaway MP made during a debate last Monday at the House of Commons:


"The production or potential production of nuclearweapons has the ability to destabilise the region, with profound global impact.My hon. Friend says that the threat of military action is counter-productive. Iam sorry to say this, but I simply do not agree. I believe that if we take thisoption off the table, theIranians will gofull throttle, as my right hon. and learned Friend SirMalcolm Rifkind pointed out, in a speech of lucidity that I can only envy.It ill behoves anyone to quote Chairman Mao in support oftheir argument, but it was he who said that peace comes from the end of thebarrel of a gun. That is particularly pertinent here, and we must keep theoption on the table."


Knowing Mr Ottaway's track record for championing the best democracy money can buy ethos that clouds our parliament (see here), I thought I had better check the Register of Members of Financial Interest to see if something may have influenced his pronouncements.


Sure enough, something did grab my attention:


"When one considers Iraq and Afghanistan, has peace come from the end of thebarrel of a gun in these countries? Mr Ottaway seems to have a selective recollection of history.

I am concerned he may have been influenced by his recent trip to Israel at the back end of last year, funded by Conservative Friends of Israel. We all know that Israel has most to fear from Iran having a nuclear weapon.

I would like to hear Mr Ottaway speak about the benefits of nuclear arms reduction.
Mr Ottoway has an excellent record of speaking up for those who give him donations. I am thinking of Japan Tobacco International as well as Conservative Friends of Israel here.
"I am reminded of comedian Mark Thomas' Peoples Manifesto which contains the policy, 'Politicians should have to wear tabards displaying the names and logos of companies they have a financial relationship, like a racing car driver."

To the Croydon Advertiser's credit, the paper didn't shy away from reporting the wider story. I gave a comment clarification when it became clear they were also covering the 'trip to Israel' angle.


I wonder if 'Bombs Away Ottaway' listens to The Levellers......

Good letter from Ross Hemingway which appeared in the Croydon Guardian and Croydon Advertiser. 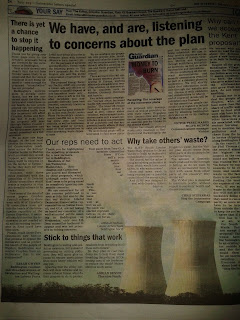 Your Say - Croydon Guardian
The week after the Croydon Guardian exposed the remarkable decision to opt for Beddington rather than Allington, Kent, for the South London incinerator (neither solution is correct), the letters page was completely full of words relating to the incinerator........ quite unprecedented.

The following week more words in the letters page relating to the decision taken by Tory Waddon councillors to break their promise regarding the incinerator were published.[They have pledged to vote against on their website]

As Greens we were furious at the apparent ease that they could lie to their voters - pledge to vote one way to get elected, and do the other in the Council Chamber . CR7 Green, Brendan Walsh, who manages our Twitter account, used several hashtags to describe this action: #gutless #shameful #selfserving #vile #twofaced.

I have to admit I was surprised at his use of the word 'vile'. There must be a conformity user guide for political speak somewhere. We're almost obliged to use mild mannered words like angered and appalled, but why can't the word vile be used? After all it is just a word. I remember Adrian Oliver, a former Green Party councillor on Camden Council, once describing a policy decision as morally reprehensible.
Dictionary.com offers morally debased as one meaning for vile, admittedly amongst other definitions, including filthy (when relating to language). Brendan explained his use of the word in a blog entitled Vilegate after the mini furore that ensued.

This brings us back to the Waddon councillors, I guess to Councillors Hilley, Hoar and Harris, a promise is just words.

Fundraisier at the Green Dragon

Big thanks to Esther at the Green Dragon for hosting the Christmas fundraiser. Also a big thank you to Cassettes, Tim Eveleigh and Magic Brother for providing some excellent entertainment.

Cassette shot some footgage of his/their performance. Unfortunately, the camera was positioned by the speakers - so the sound is slightly distorted.

Tags croydon, greenparty
Posted by Shasha Khan at 11:38 am No comments:

Linking to a newspaper article is a crime?? 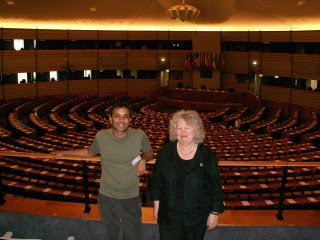 Jean Lambert MEP and yours truly at the Brussels parliament. Picture taken in 2006

From time to time a press release from the European office really catches ones attention......