Police should prevent crime, instead of picking on cyclists

Responding to yesterday’s High Court victory by bicycle protestors over the police, Jenny Jones, member of the Metropolitan Police Authority and Green Party member of the London Assembly, said:

“This decision is a victory for common sense. Critical Mass is a lively, but peaceful get-together of cyclists which has been going on for over a decade without any major incidents. Arresting these cyclists would have been like arresting a group of passengers for gathering at Westminster tube station during the rush hour. The police should stick to catching criminals instead of picking on cyclists. Tomorrow, shall be asking the Commissioner of the Metropolitan Police not to appeal the decision.”

The Party has serious concerns about Prime Minister Tony Blair’s statement that nuclear power was, “back on the agenda with a vengeance” when there is no evidence to support such a move. Of particular concern is evidence showing Labour Party donations from energy companies and lobbying firms linked to the nuclear industry.

Local candidate Shasha Khan and local Party supporters will formally deliver a letter from the Croydon Green Party to Mr. Wicks. They will also use street theatre to reinforce their message.

Shasha Khan said, “There is no need for nuclear power to be tabled as a solution to our looming energy crisis. The UK’s vast renewable resources combined with simple energy saving methods provide a safer and cleaner alternative.”

“It is baffling why an option that costs more, has huge implications in terms of waste disposal, could easily be the target of a terrorist attack, emits carbon dioxide in the production process and whose core mineral, uranium, is in ever diminishing supply, is being pursued! Our conclusion is that the cash strapped Labour Party may be determining its policy via a different set of considerations".

Figures published by the Electoral Commission showed money flooded in to the Labour Party from energy companies and lobbying firms linked to the nuclear industry. Crucially, the cash donations give the pro-nuclear lobby access to decision makers.

Shasha Khan concluded, “It is important that Mr Wicks shows us all that he is his own man and not Tony Blair’s ministerial poodle. The facts are there for all to see. If, as I fear, the energy review concludes that the country proceeds with the nuclear power option with a token level of renewable energy, then one can only assume that decisions simply go to the highest bidder.”

I'm sure they would appreciate any offers of help....

Labour won Croydon three times in succession from 1994 to 2002 despite the Conservatives always having more votes. This was because there are a number of very safe Conservative seats in the south of the borough where turnout has been quite high, while Labour wins wards in the centre and north of Croydon with smaller shares of the vote on a lower turnout.

This pattern came to an end in 2006 as the Conservatives won control, although it should be noted that the Conservative share of the vote was fractionally down on 2002. The result was more because Labour’s vote fell sharply and went mainly to the Greens (in some wards to the Liberal Democrats).
The parties gaining votes – Greens, Lib Dems and UKIP – were left unrepresented in the council chamber. The Lib Dems lost the seat they were defending to the Conservatives while picking up votes in wards where they stood little chance of success.
The possibility of future anomalous results in Croydon is still there. It would take a relatively small swing to Labour in order for the party to reach 36 seats and overall control. There are four Conservative seats in split wards, and two wards (six seats) which are vulnerable to a 3 per cent swing back to Labour. It is therefore possible that in a future election Labour could run Croydon with less than 30 per cent of the vote and lagging more than 10 percentage points behind the Conservatives.

Hundreds of thousands of voters who turned out at last month's council elections were "swindled" by a system that put control of a dozen councils in the hands of the "wrong" party because of a mismatch between votes cast and who got elected.

That was the claim made yesterday by the Electoral Reform Society, which published a 110-page booklet called "The Great Local Vote Swindle" , analysing the election results. Its analysis shows that the Conservatives " won" the contest in Kingston upon Thames, with 41 per cent of the vote, but it left them with only 21 council seats.

A big loser was the Green Party, which won more than one fifth of all the votes cast in Hackney, but ended up with only one councillor out of a total of 57.

The Society's full report on the 2006 local elections is out now.

On Wednesday 14th June, Darren Johnson, leader of the Green Party group on the GLA, will present a near 8000 signature petition to London Mayor Ken Livingstone against the construction of 200 private luxury housing units and other non-park related development on Crystal Palace Park.

Meet Darren Johnson outside City Hall at 9.30am sharp for a press photograph, take a plackard. CPCA would like to know if you can attend cpca(at)onetel.com. 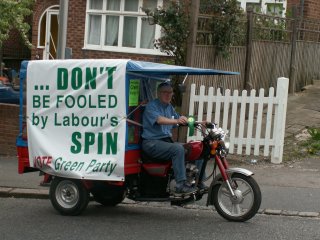 If you live in South Norwood or Upper Norwood, you would have probably seen Tom Real and his 'trike'......
Posted by Shasha Khan at 10:10 pm 1 comment:

Meeting at The Green Dragon

The Hogshead Pub where Croydon Greens are meeting upstairs on Monday 5th at 7.30 pm has had a comprehensive refit and a name change to The Green Dragon. 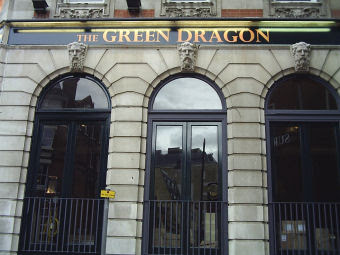 The Next meeting of the Sutton and Croydon Green Party will be on the 13th June at 8pm at the Centre for Environmental Initiatives Carshalton, map here.
Posted by Sutton & Croydon Greens at 9:50 am No comments: