Exclusive offer at the National Theatre

Best available tickets for only £15. Call 020 7452 3000 quoting ‘ECO GREEN’ or enter promotion code ‘3433’ before selecting your tickets online. Valid for performances between 3 February and 10 March. Subject to availability.

Seeking to understand a subject of great complexity, the National Theatre has asked four of the most distinct and exciting playwrights in British theatre to collaborate on a new piece of documentary theatre. This team has spent six months interviewing key individuals from the worlds of science, politics, business and philosophy in an effort to understand our changing relationship with the planet.

Greenland combines the factual and the theatrical as several separate but connected narratives collide to form a provocative response to the most urgent questions of our time. 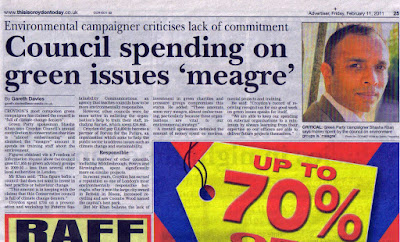 "These organisations are vital to our environmental strategy. They have skilled and dedicated staff that project manage and help community groups, companies and councils to find environmental best practice solutions. Using their networks, they also work to change the behaviour of individuals. I did some work for the London Sustainability Exchange, which is funded by Forum for the Future to help promote sustainable lifestyles amongst ethnic minority groups.

"These amounts befit a council that does not want to invest in best practice or behaviour change. Moreover, these amounts are in keeping with the claims that this Conservative council is full of climate change deniers. These contributions are just token gestures with regard to the environment. Croydon Council should be up near the top of the league table for London council contributions to environmental agencies." 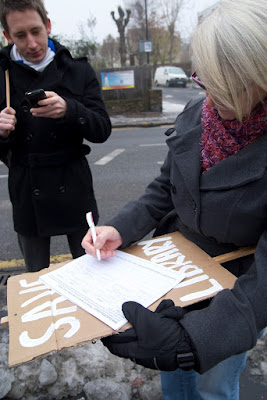 The weekly Insider column in the Croydon Advertiser has had a stab at predicting the outcome of the proposals to close up to six local libraries. No one officially knows who the The Insider is, but if it is who we all suspect it is, then we have to assume her/his sources are reliable.
The column says:

The strongest rumour is that Norbury library will not face the chop, a direct response to the vociferous opposition campaign.
Sanderstead and South Norwood might not be so lucky but rather than close altogether could be kept open a couple of days a week.
Broad Green would appear to be the most likely closure candidate and there have been suggestions for some time that Bradmore Green could find a new home in a nearby educational establishment.
Shirley is difficult to call although public opposition is strong and Croydon Central MP, Gavin Barwell is on a mission to keep it open. 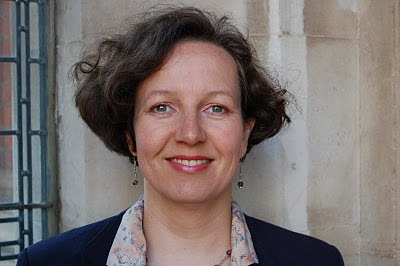 Croydon Local Involvement Network (LINk) do some sterling work in ensuring that local health and care services meet the needs of the local people. Upon being an active member of this local group, Tracey Hague has recently been co-opted on to the Health, Social Care and Housing Scrutiny Sub Committee. Tracey is also the current Croydon Green Party Social Officer and in the 2010 elections was the Green Party candidate for Addiscombe. Well done Tracey for getting selected!

Question to the Council 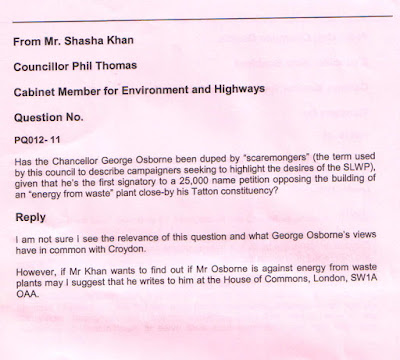 Always difficult to do it in 50 words; I only just just managed it:


Has the Chancellor George Osborne been duped by “scaremongers” (the term used by this council to describe campaigners seeking to highlight the desires of the SLWP), given that he’s the first signatory to a 25,000 name petition opposing the building of an “energy from waste” plant close-by his Tatton constituency?

Culture of Resistance, 15th February at The Green Dragon 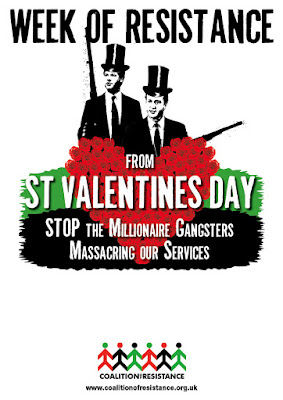 The Green Dragon’s (1) Tuesday acoustic night, Freedom of Expression, will be highlighting a special campaign called ‘Culture of Resistance’ on 15th February. The gig is part of a series of weeklong events being organised across the country to raise awareness of the simple fact that, “we are not all in this together.”

The series of events from the 14th February to the 19th February, including concerts and film screenings as well as protests and demonstrations, has been called by Coalition of Resistance(2)

“Culture of Resistance is an opportunity to rally together everyone in Croydon who cannot comprehend why we’re embarking on these savage cuts when the state owned RBS bank will pay out £1 billion in bonuses to its top bankers. We’re all scratching our heads wondering how the speculators and tax dodgers are simply not paying for this crisis. Instead, we’re are seeing libraries close, services being axed and jobs being lost.”

“We need to start a resistance to these cuts that will affect the most vulnerable in our society. “

The event at the Green Dragon (3) showcases acoustic music, poetry, magic and comedy from talented local artists. Information will be available about the first major demonstration this year organised by the TUC. The show commences at 8pm.

(2) Coalition of Resistance is a broad united campaign against cuts and privatisation made up of individuals and groups, including the Green Party.

(3) Landlady Esther Sutton was a Green party candidate for Fairfield ward in the 2010 local elections. 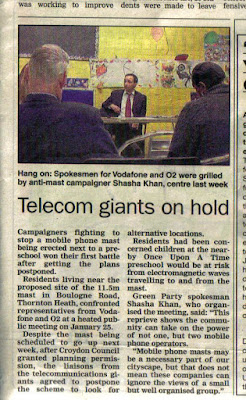 .....Piece on the mobile phone mast in the Croydon Guardian. 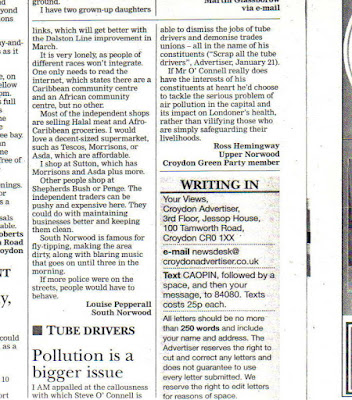 Doesn't flow off the tongue like the 'Musketeers' or 'Amigos', BUT this issue will come to the fore in 2011 in Croydon.