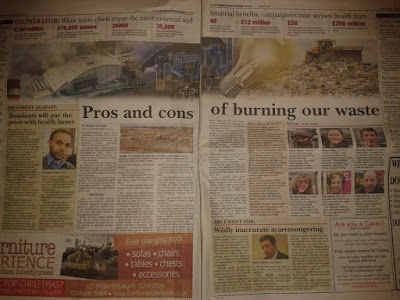 Croydon Advertiser - December 23rd
Full marks go to David Churchill for his two page report on the incinerator. PROPOSED BY VIRIDOR - THE SUCCESSFUL CONTRACTOR - IT HAS FINALLY BEEN REVEALED THAT A 275,000 TONNES ENERGY FROM WASTE INCINERATOR IS PLANNED FOR BEDDINGTON LANE.

This is a complicated issue but his piece is easy to read and understand. It's available online here and here.

Campaigners fighting plans for a waste facility in Beddington continued their protests against the councils involved. Campaign group 'Stop the Incinerator' protested at a Sutton Council executive meeting on Monday night, as councillors voted through a planning brief which would allow the facility to be built in Beddington.

South London Waste Partnership is expected to soon unveil plans to build a major waste management facility, including an incinerator, in Beddington Lane.

It is understood the facility could not only burn rubbish from the four boroughs, but from further afield. Campaigners told the meeting they had concerns the centre was one of the most harmful energy-from-waste facilities for the environment that existed.

Jim Duffy, from the campaign group, said evidence also showed incineration reduced recycling rates as paper was needed to keep an incinerator burning a high level. They also raised concerns radioactive and harmful waste could also be burned at the facility.

Outside the Sutton Civic Offices on Monday, and during the meeting, protestors carried banners and taped money across their mouths. Waddon resident Dave Pettener said the money symbolised how democracy was being gagged as residents concerns were dwarfed by the demands of big business in the £1bn waste deal.

Leader of Croydon Green party Shasha Khan said: "Social and environmental costs have to be given preference over the bottom line."

The protestors were told by council bosses the planning brief safeguarded both the environment and residents, and did not mean a facility was definitely going to be built.

Councillor Sean Brennan said: "Since 1986 we have been at the cutting edge of environmental issues. We will not relinquish that lightly."

The protestors action at the meeting followed Mr Pettener and Mr Khan handcuffing themselves to council chamber railings at a meeting of a Croydon Council Overview and Scrutiny Committee on December 6, when it went into private session to discuss documents, believed to be the plans for a new waste facility site in Beddington Lane.
--------------------------------------------------
Tags croydon, greenparty
Posted by Shasha Khan at 12:32 pm No comments: