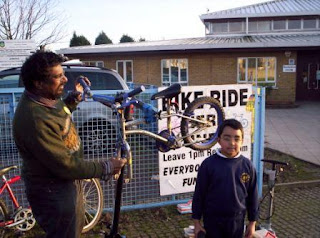 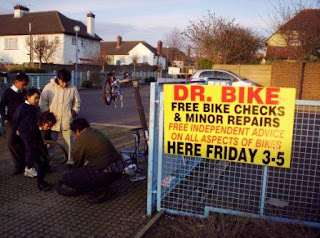 Thanks to Channa de Zoysa for taking a look at my bike yesterday. As well as carrying out bike checks at St James the Great School, he also organises bike rides. Here's his web site. 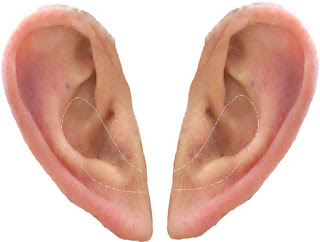 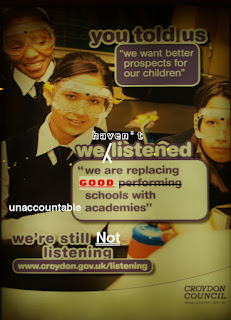 'This Council calls on all Members to support a short moratorium to the current schools Consultation to allow Schools, Headteachers, Croydon Council, parents,
teachers and pupils to seek a new consensus for education in Croydon based on
mutual support and respect and allowing local people to shape the future of Education in our borough'

Comment given to local papers regarding scrutiny committee's decision 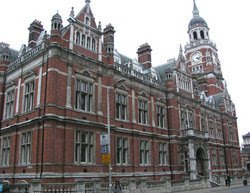 Last night the Scrutiny and Overview committee at the council decided not to send back the 'secondary review' decision to the cabinet. BASICALLY, IT WAS A DISPLAY OF HOW THE MACHINE THAT IS LOCAL GOVERNMENT GIVES THE IMPRESSION THAT IT WORKS FOR THE PEOPLE BUT THE REALITY IS SOMEWHAT DIFFERENT.

"After presenting to the scrutiny committee meeting, I am now clear in my mind that contrary to the poster campaign around Croydon, this council is not listening to parents, teachers and pupils. If the chair of governors from Ashburton Infants and Haling Manor – as well as Croydon Save our Schools - make impassioned submissions to the committee, only to find that their arguments fall upon deaf ears, then there is no doubt in my mind that the proposals are a done deal. You only have to look at The Harris Federation web site, where Haling Manor is already listed, to realise that the council will steamroller the proposals through.

"Arguably, those of us that spoke were set up to fail through a technicality. After two hours of discussion, members of the committee pointed out that they had not heard any arguments relating to reasons for a referral (1) to the committee. It was not stipulated to those of us that addressed the committee that we needed to pitch our submission to the points of referral. In any case, unlike the council, we do not have an army of lawyers and consultants on hand to trawl through the ‘policy framework’ or to find inconsistencies within council policy.
In fact, with regard to BSF funding, I pointed out that academisation is not a prerequisite for BSF money and this was stated by Schools Minister Jim Knight."

Tesco's in Purley applies for for a 6kw wind turbine 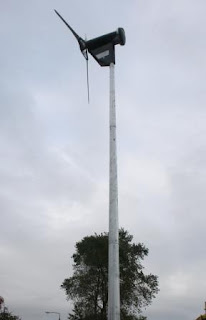 "I welcome any attempts by companies or individuals to embrace renewable technology because with ever increasing utility bills, it is simply good housekeeping to plan ahead. However, I am concerned that in an era of gesture politics such as Malcolm Wicks’ application for a wind turbine whilst Energy Minister, that Tesco’s 6kw wind turbine is merely tokenism. 6kw provides around enough energy for just one household. Therefore, in addition to applying for this wind turbine, I would urge Tesco to make a concerted effort to reduce its food miles as a route to reduce its overall carbon footprint. With profits of approaching £3 billion, they have the capacity to make the effort 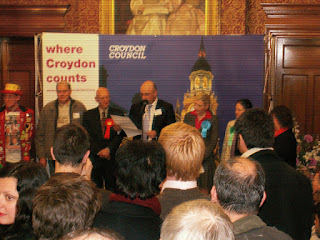 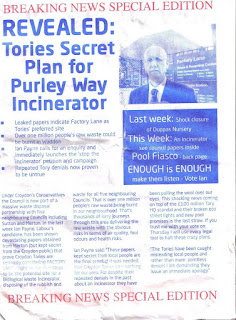 PRESS RELEASE
For Immediate Release: 10.02.09
CROYDON GREENS TODAY EXPRESSED THEIR DISAPPOINTMENT AT LABOUR’S LATEST WADDON BY ELECTION LEAFLET AS THE CAMPAIGN REACHES A NEW LOW.
The latest Labour Party leaflet manufactures the claim that the Tories plan for a Purley Way incinerator (1 ).

Green Party candidate for Thursday’s by election Mary Davey said:
"The Green Party have been involved with the South London Waste Plan consultation from the start. “We have submitted a 5000 word document (2) to the consultation detailing our concerns, including our commitment to recycling and waste minimization, and our opposition to incineration.
We took a balanced and responsible approach when we placed this story in our Waddon by-election leaflet.
"What seems to have happened is that the Labour Party have seen our leaflets (3) and have realised they can try and make some cheap political capital from this issue.
"They could have adopted a principled position like ours rather than a last minute attack on a technology a Labour government and Labour councils have endorsed, the length and breadth of the country, for example in Bristol and Mansfield. Instead of following our principled position, they have decided to whip up people’s anxieties. It's nothing short of scaremongering. No wonder the electorate is cynical about politicians. "
The Green Party has seen the full document (4) on which Labour’s tawdry leaflet is based. This document does not suggest an Incinerator will be built at Factory lane. It’s an internal document produced by Merton Council, several months ago, primarily looking at the alternative options for financing any future installations.
Spokesperson for Croydon Green Party, Shasha Khan added:
"We are not for one minute defending the Conservative council’s approach because they along with Merton, Sutton and Kingston Council may opt for an incinerator but what Labour have done is taken a quote completely out of context in order to win last minute votes. It's disgraceful behaviour and those involved should be thoroughly ashamed. This form of politics is outdated and needs to come to an end."
Ends
Notes:
(1) Jpeg
(2) http://croydon.greenparty.org.uk/assets/PDF/Croydon&SuttonGreenParty-DraftResponsetoSouthLondonWastePlanConsultation-Webversion.pdf
(3) http://croydon.greenparty.org.uk/assets/PDF/WaddonBy-ElectionSpecial-WebVersion.pdf
(4) http://www.merton.gov.uk/democratic_services/ds-agendas/ds-fpreports/656.pdf

A few days ago I had the privilege of discussing Croydon council's secondary education proposals with Haling Manor’s Student Council.

I went along with fellow Croydon SOS colleague Jane Eades. She was much more familiar with the surroundings being a retired teacher. As for me, it was slightly unusual to be around pupils in a school during opening hours.

I’ve attended meetings and hustings in schools but never when pupils are about. They were quietly going about there business to and from lessons.

The picture the council portrays of this school is one of unruly behaviour BUT nothing could be further from this notion. There genuinely seemed to be mutual respect between pupils and teachers.

The question and answer session with the Student Council went really well. There were two representatives from each year and the questions asked were intelligent and deliberated. It will be an absolute travesty if this school with an intake of 30 per cent who are refugees and asylum seekers is forced to close and reopen as Harris Academy South Croydon (or something similar). And it is the pupils at the school who will be the ones most affected by the changes so it is absolutely right that they fully understand what is going on.
--------------------------------------------------
Tags croydon, greenparty
Posted by Shasha Khan at 8:52 am 1 comment:

About a year ago I met a gentleman called Tony at a wedding. My wife and I set next to Tony and his wife for the wedding breakfast. Instead of talking about the ceremony, the brides dress or the best man speeches, Tony and I spoke at great length about an idea he had to make it easier for the electorate to find out more about their local candidates. A few weeks later we met up in Croydon where I gave some impartial opinions about the positives and negatives and practicalities of operating an election information web site.

I hadn't heard from Tony for a while, that's until he contacted me a few days ago in order to provide information about Green party candidate Mary Davey for the Waddon by election. It turns out the seed of their idea has germinated into live web site called Votewise.

Related to news that Oasis are finding it difficult to achieve the 'A- C' GCSE grades they expected.

This statement by Oasis Trust has the feel of a profits warning issued by a blue chip company. And to carry on with this analogy, investors should be wary before lumping on Oasis.

The jury is still out on Oasis. Rev Steve Chalke opened three schools in 2007, followed by six in 2008; so how can a local authority be confident that Oasis will deliver at Ashburton without a track record to view? In actual fact many academies are now found to be failing.

Croydon council need to accept that academies are not the answer for struggling schools. It’s obvious that a school with a high intake of pupils with English as a second language will find it difficult to meet performance indicators in English and Maths.

What worries me is that Oasis and other private sponsors are under pressure to deliver results to such an extent that they will use covert selection procedures and exclusions to bump up the results. Sadly, without a democratic board of governors or local authority control, there is nothing to stop them.
--------------------------------------------------
Tags croydon, greenparty
Posted by Shasha Khan at 3:12 pm 3 comments: