I have long been concerned about the levels of air pollution along Croydon’s arterial roads caused by volumes of traffic. Sadly, the situation is only going to get worse. According to DEFRA, the number of cars on the roads is set to increase by 50 per cent over the next 20 years. Therefore, I welcome Croydon Council’s new air quality text service (Air pollution warnings could save lives, November 15). This will undoubtedly help those that suffer from asthma, bronchitis and heart disease.
It’s a shame that the airTEXT service was not up and running in time for bonfire night. On that weekend, the London Air Quality Network recorded ‘very high’ level of air pollutants at its monitoring station in Thornton Heath. Only eight areas in the whole of London recorded a ‘very high’ reading. A combination of atmospheric conditions, common causes of air pollution and harmful materials being thrown on to a bonfire can trigger such a reading.
It is clear that reactive measures such as airTEXT are only part of the solution. Croydon Council needs to put in place proactive strategies to cut down the volumes of noisy, polluting and frustration causing levels of traffic in the borough.

Response to BNP message on wreath

Link to article in local paper

Croydon Green Party have co-signed the letter below which is being circulated amongst community leaders and politcal groups.

The undersigned represent a broad collective of Croydon and London community representatives who wish to express their complete rejection of the actions of the BNP in Croydon at Addington Church on Remembrance Sunday.

The message attached to their poppy wreath which read:

‘To those who fell for our race and nation to keep Britain British we will never forget them. Croydon BNP’

along with the comments of their Press Officer who said:

‘that anyone who thought the wreath was offensive, wants Britain to be invaded’ and ‘The message does not mention the race of people fighting, but it is not a bad thing to want to keep Britain white’

only serves to demonstrate that despite their wish to give the illusion of being a genuine political party, they are no better than Hitler and his fascists, against whom soldiers from many nations around the world fought and died to protect the freedoms we enjoy today.

We believe in hope not hate. The BNP believe in hate. We are united in condemning the views and actions of the BNP, both in Croydon and throughout the country which have no place in a democratic society, such as Britain, which respects the contributions made by people of every race, nationality, colour, sexuality and religion.

The next meeting of the Sutton and Croydon Green Party will be on Tuesday 14th November at 8pm at the Centre for Environmental Initiatives Carshalton, map here.

Members of the Sutton and Croydon Green Party joined thousands of others in the biggest climate change rally in the UK on 4th November. Local Greens joined other campaigners outside the US Embassy to listen to speakers, including Green MEP Dr Caroline Lucus. She commented that: “Failure to act to tackle climate change is costing lives – and threatens the
very future of human civilisation as we know it”.

Campaigners carrying banners and placards then marched from the US Embassy to Trafalgar Square, where they joined thousands of others who had congregated for more speeches and a concert. Performers included Razorlight and KT Tunstall.
Local spokesperson Shasha Khan said, “The Stern report has made it clearer than ever that we need urgent global action if we are to prevent the worst impacts of devastating climate change. All around the world national governments are spending too much time highlighting the failings of other national governments in combating global warming. What we need is governments, national and local, to become part of the solution and not part of the problem.” 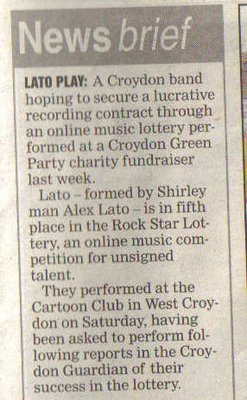 Poverty is Key to Crime and Living 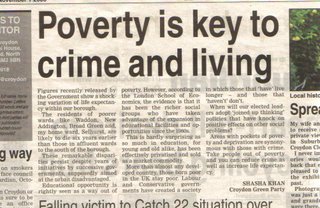 Comment made to Sutton Guardian in response to the Liberal Democrats claim that on carbon emissions, only they have "put forward firm plans to help is change our behaviour".

"For the Liberal Democrats to claim that they are the only party to "put forward firm plans" is laughable.

Sir Nicholas Stern's report, commissioned by The Chancellor of The Exchequer, reveals the apocalyptic cost of global warming if the issue is not tackled within a decade.

Since it's formation in 1973, when it was called the Ecology Party, the Green Party has continuously offered policy solutions to this impending global catastrophe, through its Manifesto for a Sustainable Society. The other parties, including the Liberal Democrats, are living in cloud cuckoo land if they think taxation is the only way to combat climate change. Yes, taxation is useful tool in tackling climate change but it must be used alongside regulation, legislation and public investment.

In the last General Election the Green Party's policy was, and still is, to abolish VAT and replace it with less environmentally damaging green taxes. VAT is a regressive tax which does not take into account the environmental impact of goods and services. However, taxation alone cannot reduce the UK's ecological footprint - legislation must be used, too. In Germany, the government has passed a law which guarantees a higher rate for commercial and domestic suppliers of renewable power. The result has been a boom in wind and solar power in that country. "
--------------------------------------------------
Tags croydon, greenparty
Posted by Shasha Khan at 5:22 pm No comments: