The stall, then and now

I do find myself getting quite nostalgic about Green Party activity, partly because as the General Election campaign moves into full swing mode, it's hard not compare with previous elections.

On Saturday (21st Feb) Esther Sutton, Peter Underwood and Bernice Golberg had set up the stall from 10am. I was rostered for an afternoon shift, and as usual the opportunity to joust with an anthropogenic global warming sceptic, meet the South African gentleman, who from memory has visited every stall we have done, and exchange email addresses with the Chair of the local mosque just goes to show the old ways of communicating are still effective in this new media age.

There was also plenty of interest in the No to Waddon Motorways campaign that Peter has taken a lead on.

When I arrived at the stall for my stint I noticed the stall was in front of HMV. In the recent past we've been positioned right in the centre of the pedestrian zone, but we've also pitched up on this spot before. I had a look through some old images on my old pc and found a picture which confirms this!

At a packed local meeting on Monday just gone, Tracey was selected as Green Party candidate. The press release below will go up on the web site.


06.02.14
Press release immediate
Vote Hague For Selhurst
Starts
Croydon Green Party has selected its co-leader, Tracey Hague, as their candidate for the Selhurst by election.
Croydon born and bred, Tracey Hague’s career went from a Dance degree via working in the family hotel to becoming a qualified and experienced project manager in the energy sector. As mother of 2 young children she knows the pressures parents face.  An experienced campaigner on environmental and animal rights issues, she has championed health issues - including 3 years on the Scrutiny sub-committee for health, housing and social care.
Commenting on her selection, Tracey said, “Croydon Council is made up entirely of Labour and Conservative councillors. It needs an alternative, desperately. We have watched with amazement how Labour councillors campaigned against an incinerator in opposition and now in power sanction it; state they have no intention of closing Purley swimming pool if elected in 2014 and now in power threaten to close it; and call for a moratorium on new developments in London Road in ward hustings and now in power carry on developing. Voters must be wondering what the difference is between Labour and Conservative. We need some other colours in the Town Hall so residents are listened to.”
She continued, “The recent surge in membership nationally is being felt locally, up from 76 to 236 within a year (1). Our national polling has shot up as well. The public like the fact that the Green Party wants politics to work for people and not for big business.”
Ends
Notes
(     1)  – 236 members on 3rd February

How the #greensurge is being experienced locally

Back in the twilight of our blink and you’ve missed it English Summer, there were some extraordinary bumps in Green Party membership which were unprecedented. I remember speaking to former London Coordinator Noel Lynch in October about the causation. He explained that three key factors within the UK had triggered this change. The first was the European Election results. Winning a third MEP was in the grand scheme of things quite a minor achievement. However, the Lib Dems had only won two MEPs. The second was the Scottish Referendum which opened up the political spectrum. The Scottish Green Party campaigned for a 'Yes' vote and experienced a massive boost in membership. Finally, not being included in the TV debates was the start of a wave which just hasn’t stopped. In recent weeks Call me Dave Cameron has helped boost our exposure further, resulting in a big jump in memberships and in the opinion polls.

There has been widespread coverage of the so called ‘green surge’.  Recent opinion polls have seen the Green Party at 10 per cent, with one Ashcroft poll showing the party at 11 per cent. Additionally, the party’s  membership has jumped from 15,000 to 50000 in England & Wales in space of a year, overtaking Liberal Democrat and UKIP memberships in the process.  This national phenomenon is also being felt locally. A year ago the party had 76 members in Croydon. It now has have 227, rising by the day.

I WROTE THE ABOVE OPENING PARAGRAPH FOR A PRESS RELEASE ON FRIDAY 30TH JANUARY, AND BY 2ND FEBRUARY WE WERE UP TO 235 MEMBERS.

Later in the aforementioned press release I make the comment that among 18-24 year olds, the party is polling 22 per cent. STOP PRESS – we are now at 29 per cent! 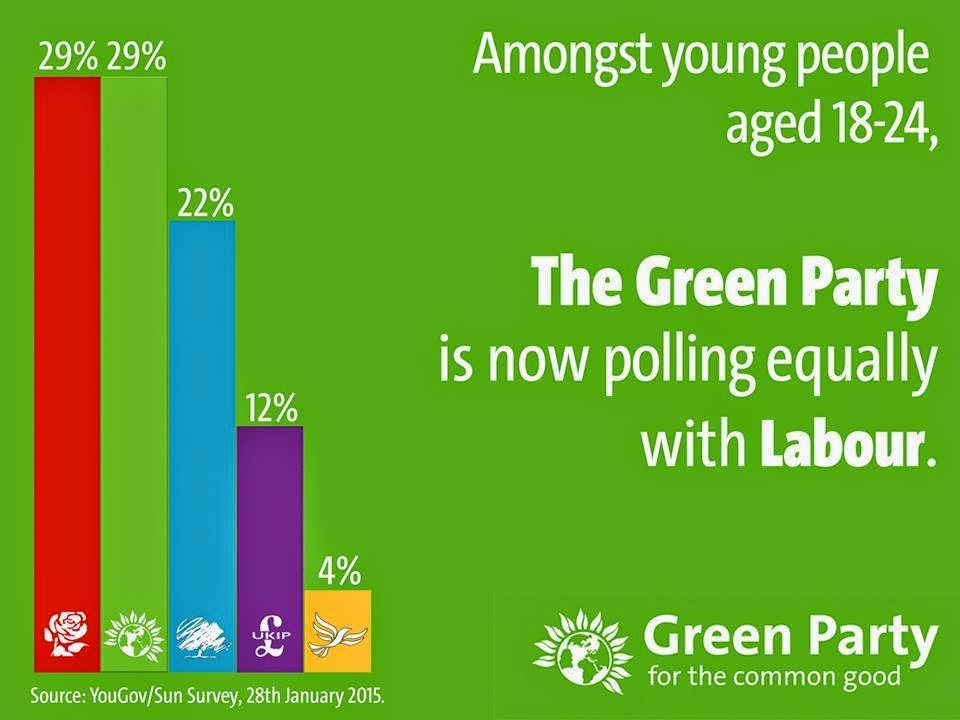 To say that the situation is fluid is an understatement! To give readers a flavour, here are reasons why four new members have joined: