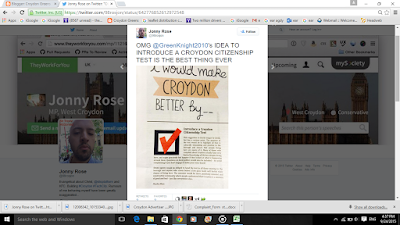 Introducing a Croydon Citizenship Test to all new residents to our borough. The purpose of the test would be to highlight all that is culturally stimulating and great in the borough, from Coombe Wood to Croydon Tech City, and from The Alchemist to The Oval Tavern, and everything in between. Questions on elected officials would also be included, including details of the last set of election results. Estate Agents will be obliged to hand the test to all those moving to our borough and anyone that scores below a low pass mark will forfeit their chance of living here.


Shasha Khan only wants the enlightened.

The Croydon Citizen has a page in its paper which asks how you would make Croydon better.
When I submitted my sugesstion the Senior Section Editor replied:
It's a lighter kind of 'Better By' entry which actually makes a serious point - that a lot of people who complain about Croydon actually have very limited knowledge of life here despite living here, and might genuinely feel happier and more positive if they looked around and engaged.  And of course for everyone to follow and participate in local politics (look at voting percentages!) would transform outcomes: once again people complain, yet contribute to the situation by their own inaction.
Local Tech City guy, and influential figure, said on twitter

Whipped into submission - my 800th post on this blog


Looking at the statistics on this blog, this apparently is my 800th post! Wooohoooo!! My timing is superb because it coincides with two other landmarks being celebrated today: The queen becoming the longest reigning monarch   and Wayne Rooney scoring a historic 50th goal to become England's all-time record goal scorer.

Responding to the article which appeared in the Croydon Advertiser in late July, I sent in a letter which appears below.


However, the Croydon Advertiser cut out the names from the letter, as well as a couple of sentences. The full version of the letter is below.

Through my discussions with activists, councillors and the local media in Croydon and Sutton, I have been made aware, from those in the know, whom exactly the beatmasters are we all dance to.

The reaction from the Liberal Democrats in Sutton to one of its own, Councillor Nick Mattey, for daring to speak up vociferously against the South London incinerator is a reminder that the role of the councillor, far too often, is to rubber stamp the established view. Councils are set up like tightly run local oligarchies which in turn wield their power using party whips and old fashioned collective responsibility.  In Sutton, it is understood the oligarchs are John Drage, Chair of Sutton Liberal Democrats, his wife Elaine Drage, Tom Brake MP and Niall Bolger – the CEO of Sutton Council. In Croydon, there is a widely held view that the leader of the council, currently Tony Newman, CEO Nathan Elvery and council solicitor Julie Belvir run the show.Equally, one will also find councillors tend to keep their head down, go along with party view to move up the power ladder thus avoiding being deselected.  Some are dependent on the additional income that comes via allowances.That is why it is all too rare in Sutton and Croydon to see councillors oppose the party line when voting takes place in the chamber.  Councillors are not allowed to be free thinking advocates for the people they represent. Thankfully, the Green Party and UKIP do not operate a whip system. It does mean that sometimes councils occasionally appear to be disjointed, as was the case in Brighton, where Greens opposed Greens during a bin strike, but I’d rather this than a council chamber full of sycophants.

Posted by Shasha Khan at 3:45 pm No comments: