Letter on people before profits or profits before people

I read Conservative Jason Hadden’s letter with interest. I understood it as an attempt at distancing himself from the political class currently embroiled in the expenses scandal. It is good to see politicians claim that that they “got into politics to help people”.
However, I disagree with the conclusion that the best route to help people is by joining the Conservative Party, a party whose roots are deep in the political class, that views those trimmings that come with the job as an entitlement, a party that is well known for prioritising profits before people.
By contrast, Green politicians are not looking to board the gravy train. It is no accident none of our elected representatives have been caught with their hands in the cookie jar and audits and league tables prove this.
Long before the ethics of MP’s expenses became news, Greens have been committed to transparency and honesty. It is unsurprising that last month’s YouGov poll concluded that Green politicians are “least likely to put self-interest before country” and that the Green Party’s leader Caroline Lucas MEP has just been voted ‘Ethical Politician Of The Year 2009’ – an accolade she has now one twice in the last three years.
Voters in their droves are realising that the Greens are the fresh alternative to the grey parties, representing people as a whole. You only need to see the results of the Euro Elections in Croydon where our polling increased by 50 per cent.

Message sent to Five Live earlier in the week

I listened to Nick Clegg's U turn on the Trident Missile System at 7.10am this morning. It's the right decision - Trident is waste of money. However, the timing of his conversion is interesting. I don't suppose it has anything to do with the fact that the Green Party were only 5 percentage points behind the Lib Dems in the Euro Elections?? 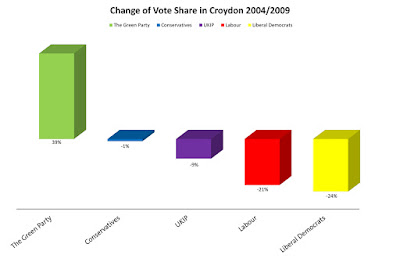 Thanks Rob and David for knocking up this chart which certainly makes for interesting viewing. The chart depicts the percentage gains or losses made in Croydon by the seat winning parties for the London region. In Croydon, the Green Party vote rose by 39%. The BNP vote also rose, but only by 33% (it could have been a lot worse). But the Lib Dems (-24%), Labour (-21%), UKIP (-9%) and the Conservatives (-1%) all experienced a negative sensation. HOORAH!

For me, our positive experience was already materialising at the count - even before the serious number crunching. Thoughtfully, the Green Party's London Coordinator Noel Lynch had the 2004 results in his pocket. After I had managed to collate the results for Croydon, I called them out to Noel who responded by approximating whether they were "up" or "down", taking into consideration the lower turnout. We realised the Green vote was up but then one by one it became apparent, apart from the BNP, that all the other parties had seen their polling fall. The only one we were not sure of was the Tory vote.

THANK YOU FOR VOTING GREEN! 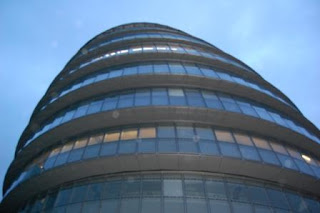 I joined fellow London candidates last night at City Hall for the European Parliamentary Election 2009: London Region Consolidation of votes, allocation of seats and declaration of results. The event just like the title of the event itself could have been organised more efficiently. The TV screens that showed the rolling total as final numbers were being returned by the boroughs was inadequate in size. I reckon some of the front rooms around where I live possess TV screens larger in size. When I did get a chance to view the monitor in between armpits and over shoulders, I noticed we had finished second in a couple of boroughs. From memory, Hackney and Lewisham - possibly more.

From what I was able to note from the screen, below is the (unconfirmed) result from the Croydon jury. Full regional and national results can be seen on the BBC web site.

It is little disappointing that such a fantastic increase in vote share didn't translate to more seats but I guess thats down to the reduction from nine to eight seats in the region AND the rather disproportionate D'Hondt proportional representation system which is used. I heard Caroline Lucas say in an interview that we would have done a lot better if the UK used the same method used in Germany.

Rev Hargreaves the face on the Christian Party billboards wrote 'So Macho' by Sinitta (hit in the 80's). You remember: "Big and strong, enough to turn me on and on....." Link explains this plus thoughts of six parties.