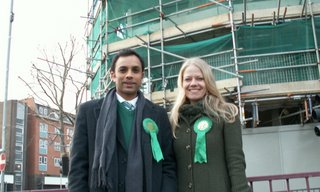 HOUSING DEVELOPMENT MUST NOT BE AT EXPENSE OF LOCAL GREEN SPACES

Ill-thought out housing plans are putting many of Croydon’s green spaces at risk, warned a leading representative of the UK’s Green Party.

Sian Berry, the female principal speaker for the UK Green Party, made her remarks while visiting the area on 26th January. Ms Berry said that Croydon Council’s approach to meeting London’s housing targets was too simplistic as it failed to consider issues such as the availability of existing housing stock and the irretrievable loss of green spaces.

“Whilst there is, undoubtedly, a need for more homes in London, a lot more thought needs to be given to how this can be achieved. Croydon currently has more than 4,000 homes standing empty (1), so we need to ask why that is before embarking on an additional building programme – particularly as it seems that new houses in Croydon will come at the expense of local green spaces.

I am very concerned to hear that Croydon Council is talking about ‘nibbling at green spaces’ to meet its housing targets. This is an incredibly blinkered approach: as the population of London grows, green spaces need to be enhanced, not eliminated.”

“What is of particular concern in this area is the threat to local green spaces. They are already badly neglected and poorly maintained – particularly in North Croydon. I am extremely concerned that this will lead to a dangerous, downward spiral – green spaces are neglected so the community stops using them and then opportunistic developers move in.

The Council has got to take a much more sophisticated approach to meeting housing need.” 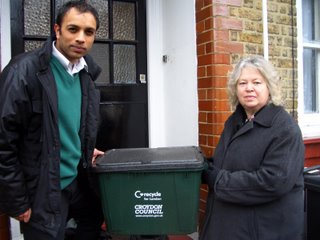 Meeting point: Thornton Heath Station London’s Green Euro MP Jean Lambert will visit Bensham Manor in Croydon on Monday 22nd January to campaign for Green Party candidate Shasha Khan in the forthcoming by election and see for herself the state of recycling in the Borough. Jean said:

“As a member of the European Parliament I have the opportunity to compare and contrast the UK’s recycling performance with that of other countries – and it’s not at all impressive.
Recycling rates in the UK are around 18% where as countries like the Netherlands achieve around 64%. We can’t let resources go to waste.

“British people are not any different to our fellow Europeans and, as we have seen from recent recycling activities, are willing to change habits quickly to reach challenging targets. There really is no excuse for the UK’s poor performance. It now remains to be seen if local councils can live up to the standards of our European neighbours and implement successful recycling schemes, accessible to everyone, throughout entire Boroughs.”

“Croydon Council has repeatedly failed to meet its recycling targets, yet all we’ve had for the past couple of years is empty promises, party ‘spin’ and resources pumped into marginal wards. Croydon is currently languishing near the bottom of the UK’s recycling league table (3). Council resources should be allocated on the basis of public need not political benefit. While residents in Addiscombe, Waddon, Norbury and Shirley enjoy their garden waste, cardboard and plastics collected, the rest of us have to find other means to get these items recycled.”

Strawberries in January in Croydon

Outside my front door in the middle of January there are wild strawberries still producing fruit. 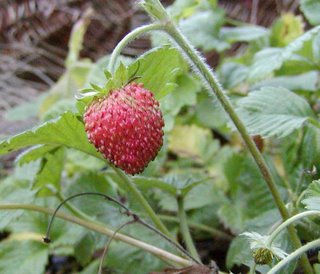 Global warming is affecting us all.

Councils must fight for small businesses 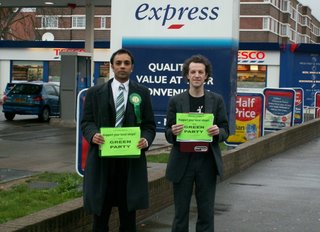 Croydon council must actively challenge the unbridled expansion of supermarkets if small local businesses are to survive, a key spokesperson for the UK Green Party said today.

Derek Wall, Male Principal Speaker for the Green Party was speaking in Bensham Manor as part of the Party’s by election campaign. He warned:

“Research consistently shows that the local economy suffers when supermarkets move into an area, yet the Treasury is now actively lobbying to remove what few restrictions there are on supermarket expansion.

Up until now, supermarkets have had to demonstrate that there is insufficient retail space in an area before they are allowed to move in. But a Treasury-backed report into the planning system has just recommended that this so-called ‘needs test’ be scrapped.

If this happens the impact on local small businesses will be cataclysmic.”

“Small business owners have told me that they’re already struggling since the opening of two Tesco Express stores, within 400 yards of each other, on London Road, Thornton Heath. This cannot be allowed to continue.

The council must include protection and support for local small enterprises in its Local Development Framework and give practical support to small shops. ”

He continued, "Local shops promote a sense of belonging to a community and without them statistics show social isolation and a rise in crime and vandalism. Additionally, unlike supermarkets, any profits stay in the local area rather than dissappearing to remote corporate headquarters."


Note to Editors
· The Barker Review, which reported in December 2006, recommends deregulation of the planning system and an end to the ‘needs test’ currently required under the Government’s Planning Policy Statement 6 (PPS6). Ruth Kelly, the communities and local government secretary and a former Treasury minister, is now considering whether to include the measure in a planning white paper due this spring. The proposal has been criticised by a wide range of organisations including the Association of Convenience Stores, the New Economics Foundation and the Town and Country Planning Association.

· Policies encouraging alternative forms of retail across London are collected in a paper by Sustain, the Food Commission and the London Development Agency: ‘How London’s planners can improve access to healthy and affordable food’.

Almost 900 new homes were built in Croydon last year. This number will need to be increased to 1100 this year if Croydon is to meet Mayor Livingstone's revised target.
The Croydon Advertiser asked the Green Party for comments after the council disclosed that green areas may need to be "nibbled at." 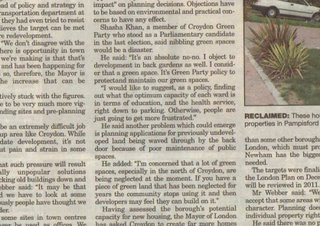 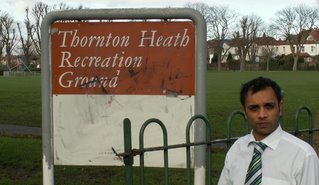 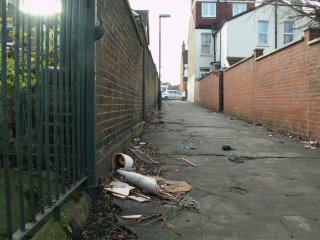 Residents are angry about the present state of Thornton Heath Recreation Ground which has been neglected by Conservative and Labour Councils alike. We believe all our green spaces and public parks should be preserved and properly maintained so the community can enjoy them.

Green Party candidiate for Bensham Manor, Shasha Khan, says:
“As a 14 year old I used to play football in the park. Now local residents are telling me they are too frightened to walk through it; one even told me her son was attacked there. It is covered in dog litter. No wonder many mums and dads don’t allow there kids to go there! This is a shocking state of affairs.”

There will be a by-election in the Bensham Manor Ward on Thursday 8th February 2007.

The Labour Party timed the resignation of Councillor Paula Shaw so that the notice of vacancy was published on December 22 - Croydon Guardian.