1) On the morning that Trump was elected I was speaking to a Pakistani gentleman in Croydon. He showed me a meme which was circulating among Pakistanis. See below. 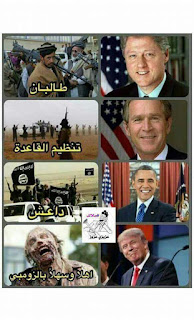 It basically says - and I know this from asking him for a translation - the following:


2) Later in the afternoon I heard Green Party candidate in the Witney by-election Larry Sanders - brother to Bernie Sanders - explain how and why Trump got elected. I couldn't agree more with his analysis.

3) I sent Larry Sander's analysis to my learned cousin in San Francisco to which I got the following reply:

I believe there are some racist folks out there in America, who would identify with a candidate who spews xenophobe mantra apologetically to the world; who began his campaign by equating Mexicans to rapists, and Muslims to terrorists; who threw out a silent Muslim woman from his raucous rally to wildly cheering crowds; who didn't disavow the entreating of the KKK; who supported the former Imperial Wizard of the KKK and Holocaust denier David Duke to run for the Senate; who was sued by the Justice Department for discriminating against blacks in 1973; who opposed the first ever black president with the most ridiculously protracted allegation that he wasn't born in America...need I go on?

For these people - and I don't know how many there are - I would argue that they voted not against but along their interest for a candidate apparently harbours their own view of race and society. But to be clear, not all people who voted for Trump are like this, the fringe. The financially depressed people of Ohio, Michigan and Wisconsin, trying to make ends meet paycheck to paycheck, want a change from the current politics that saw to it that their jobs went to Mexico and China, and here comes the Orange Knight who says he will bring coal and steel jobs back, build roads and bridges, tax all products made outside America, and doesn't sound like a two-faced spin-doctor politician. The alternative - a woman who's philandering husband took their jobs away with NAFTA. Their choice is clear.