GLA observations on the incinerator application

Stop The Incinerator has seen a letter which details areas where Viridor's ERF application does not comply with London Plan.. Its difficult to gauge at what point the GLA regards the application does conform with the London Plan. Unquestionably, Viridor have some hurdles to get over, such as the Metropolitan Open Land designation, and the Site of Metropolitan Importance for Nature Conservation status the area holds. In short, it reads like a 'must try harder' letter

Below are the roughly the areas the letter highlights:

• Biodiversity: Further discussion on the effects on nature.

• Tall buildings and design: Further information and discussion regarding views.

• Sustainable development: Further discussion in areas like climate change adaptation. Those of us that read the application, were surprised at the number of documents relating to flood management.

• Air quality: More detail on how the air will be affected

• Transport: Further analysis around how the roads will cope at the time of construction


Andrew Dickinson, the man behind Croydon Green Fair, hosts a radio show called, funnily enough, Green Croydon on Croydon Radio. I had the pleasure of appearing on his latest show as a guest. The show is available on Listen Again or can be downloaded on the www.croydonradio.com web site.

Greens pledge £2000 to the incinerator fund


To be honest, nearly everyone in our local party is amazed that we have pledged £2000 to Stop The Incinerator to fund a legal fight. When Gordon Ross sent an email around to members asking for donations, I was thinking £500 if we were lucky, but we forgot that local members have also been following this stitch up at close quarters over the last four years. 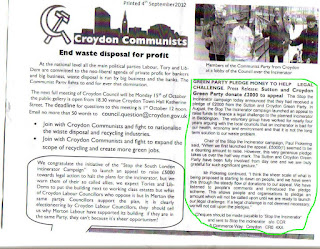 The Stop The Incinerator web site carries a press release detailing our pledge. However, apart from the article in the Advertiser (top), knowledge of our pledge was fairly limited, that is until a newsletter from the Croydon Communists landed on our doormat. They have been leafleting areas in north Croydon.  The newsletter (above) rightly criticises Labour in Merton for supporting the planned incinerator and suggests that Labour's opposition in Croydon is "clearly electioneering". There is also a piece on their local web site by John Eden covering the issue. In it he criticises Labour's focus on Waddon and New Addington, leaving working class people vulnerable to the incinerator in north Croydon.

It is true, Labour in Croydon need to prove that they haven't just jumped on the issue to win votes. They ought to pledge money to the Stop The Incinerator campaign. In the recent GLA elections their candidate Louisa Woodley spent 10 times more than our candidate Gordon Ross on the campaign. They are clearly not short of money.

For our local party, summer is a busy time for putting on stalls at the local festivals. Things were a bit easier this year, the tory council has dropped the Croydon Summer Festival at Lloyd Park, and the Addiscombe Festival was cancelled due to heavy rain. The new Croydon Green Fair, organised by the industrious Andrew Dickinson, gives green groups, such as ours, a chance to get our message out there, especially as Croydon Summer Festival is no more.

For the fifth year running we were at the Thornton Heath Festival. This year, we were very close to main stage, which does no favours for my tinnitus!

As usual the Carshalton Environmental Fair was a great success for us. It takes all the activists in Sutton and Croydon Green Party to put this on.

Well done to everyone who has a helped on our stalls this year.

My favourite free festy is the Lambeth Country Show (over 2 days). This years headliner on Sunday was Dennis Bovall and his dub band, featuring amongst others Janet Kay. Have a listen to Silly Games.

Sadly I didn't spot the Lambeth Greens at the show, but I did spot the hilarious Lib Dem stall!!

Congratulations to Natalie Bennett and Will Duckworth for winning their respective ballots. Newspapers have already picked up the news story. I know that Natalie impressed our local party members when she came to visit.


Natalie Bennett is the new leader of the Green Party of England and Wales.

Natalie is a former journalist. She has written for The Independent, The Times in London and the Bangkok Post and is a former editor of Guardian Weekly, which she left to concentrate more on writing and politics. Read more about her at http://www.bbc.co.uk/news/uk-politics-19465606.
Cllr Will Duckworth has been appointed Deputy Leader.

3,127 ballot papers were returned (a turnout of 25.1%).
In line with the election rules set out in the Green Party constitution, the Deputy Leader cannot be of the same gender as the Leader and so Caroline Allen and Alexandra Phillips are eliminated and their first preference votes will be redistributed to the highest expressed preference for an eligible candidate.
There were 353 spoilt papers (including papers expressing a preference only for a feemale candidate or candidates), giving a total valid vote of 2774 and the quota required for election is therefore 1,387.1
First preference votes were distributed as follows:
Allen - not eligible
Duckworth - 1,329
Mallender - 1,245
Phillips - not eligible
RON - 200
No candidate achieved quota, but Green Party rules require that RON not be eliminated, so the candidate with the highest vote is elected.
Will Duckworth is therefore elected as Deputy Leader.