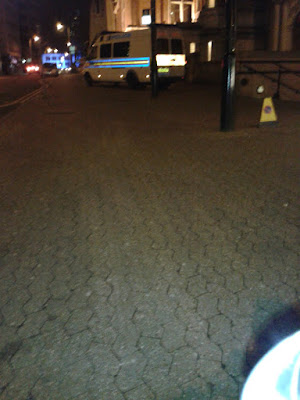 As I cycled towards the town hall I noticed a police van just yards from the entrance to the building. Was the van stationed there for the protesters outside the town hall? What are the authorities expecting us to do?

The lobby area was already brimming full of members of the public, eager to get their points across and observe democracy in action!?! There were supporters from Save The David Lean Cinema, Save Upper Norwood Library and of course the Stop the Incinerator campaign.

As usual I handed in my placards at Reception, upon entering the building. However, this time a very tall broad shouldered man was there to meet me at the new turnstile, flanked by security. He asked me if I had any handcuffs in my bag? I didn't have any handcuffs in my pannier but I explored his reason for asking. He then advised me that if I attended to do anything to disrupt the meeting I would be arrested. I was taken aback. I pointed out that I wasn't planning on disrupting the meeting and that I had a right to peaceful non violent protest.

The exchange continued for a little while longer, during which I established he was Head of Security at the Council, and that he was absent on the evening of the handcuff protest. He made it absolutely clear to me that I would be arrested if I attempted anything, and upon request produced several pages of relevant public order law from his pocket. In addition, he pointed out I would have been arrested if he was in the building at the handcuff protest.

After giving him assurances that I wouldn't disrupt the meeting I was allowed in.

WON the all important vote 35 - 33 to adopt the South London Waste Plan
LOST effectively their Waddon seats and probably control of the Council at the next local elections in 2014. There is no doubt Labour will remind voters constantly how promises made by the Tory councillors Hoar, Harris and Hilley in that ward were broken.

Labour
WON the opportunity for the public to see the Waddon councillors ignominy when asked to raise their hands to vote for the South London Waste Plan. The show of hands was a specific request by Labour leader Councillor Newman. Labour can also look forward to winning Waddon, and if all other things are equal - the Council. Privately, they know their return to power is that much nearer after last night.
LOST all credibility because, as the Tories rightly pointed out, they had only got involved in the process at the eleventh hour when they realised votes could be won. Also accusations of hypocrisy were manifold, including Labour councillors in Merton voting for the Plan and Malcolm Wicks MP actually forcing through an incinerator in Belverdere when Energy Minister - despite near unanimous local opposition.

WON the praise of the Conservatives on a couple of occasions in the debate for at least attending the Inspectors Public Hearing, something Labour failed to do.
LOST the vote, although our campaign and petition of 900 signatures opposing the South London Waste Plan (submitted by Gordon Ross) shows we are the third party in Croydon.

Me, personally
WON, in that the handcuff protest raised the profile of the issue and the lack of transparency.
LOST any anonymity I have/had. Suddenly, I am a marked man! To be expected I guess. However, I also felt the Mayor deliberately chose to disrupt my supplementary question very early on for 'time', thus causing me to miss crucial lines - something he didn't do to others. 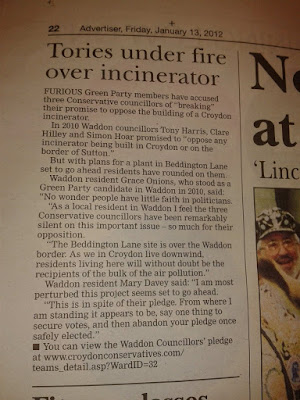 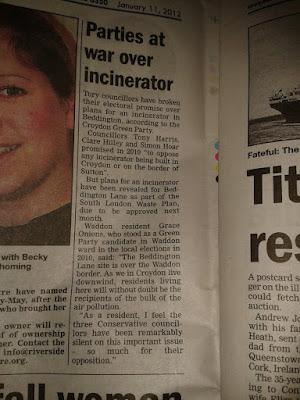 One of the most appalling parts of this incinerator saga, and there are many to choose from, is the continued pretence by the Tory councillors that the planned waste plant is not an incinerator. They continue to describe it as an 'energy from waste' facility. This despite Anjum Amin from Environment Agency explaining they will be issuing a permit for an incinerator at the recent Beddington meeting.

Our recent press release, which received coverage in both local papers:
http://croydon.greenparty.org.uk/localsites/croydon/News/2012_12_Incinerator-A-broken-Conservative-pledge.html

Beddington residents speak out against incinerator

Representatives from Viridor, including their Communications Manager, Victor Perez-Mares, gave a presentation to the Beddington residents on the 18th January.

The community in Beddington have been treated appallingly by the authorities. For decades promises and pledges have been broken. This video, recorded on my mobile phone, doesn't really illustrate enough how vociferous the residents were at the meeting regarding these latest plans.

Cr7 Green's blog explains the situation in his own inimitable way here.

Green GLA candidate Gordon Ross wrote a piece for the local Guardian's Xtra column, discussing his thoughts on the meeting:

Beddington Lane on the Sutton/Croydon border is the location for a proposed waste incinerator by the company Viridor, which if built will cost the taxpayer £200 million to build, and a further £700 million to operate over 25 years.

The South London Waste Plan which has allowed this proposed incinerator is flawed, and was skewed towards incineration from the start. The Councils involved have simply gone for the quickest easiest way to get rid of the waste, which is also the most profitable route for the waste companies, it is far from the best option for people’s health and the environment.

The public consultation never really allowed alternatives, such as waste reduction, increased re-use and recycling, composting to be discussed, nor did it allow discussion of the health and environmental impact of incineration. These important issues should be part of the waste plan, but they are not.

Viridor and the Councils call the incinerator “an energy from waste facility”, but burning waste is a very dirty and inefficient way to generate electricity, not to mention a waste of resources that should be recycled instead. The £200 million cost of building this facility would have been better spent on waste reduction, re-use, recycling, composting and anaerobic digestion facilities, which have much less impact on the environment and people’s health.

Burning rubbish produces toxic ash, carbon dioxide (the green house gas), dioxins and over 200 other toxic chemicals. Composting and other biological processes are harmless in comparison.

On Wednesday 18th January Beddington residents met with representative of Viridor, the waste company, Council officials, to find out about the proposal.

The mood of the residents was one of frustration and anger, that their problems with pollution, noise and heavy lorries from existing waste sites on Beddington Lane still haven’t been resolved, and now they are told they are to get even more lorries, noise and pollution from a vast new incinerator. The incinerator will have to be supplied by lorries transporting the 375,000 tonnes of rubbish a year they plan to burn. The noise and pollution from these lorries is an unacceptable burden to expect the people of Beddington to put up with. Enough is enough! The council needs to address the real problems facing the residents, not heap more rubbish onto their community.

I doubt very much that Beddington would have been chosen as the site for an incinerator if it had lots of well-off residents, who could afford expensive lawyers to mount a legal challenge to this plan. 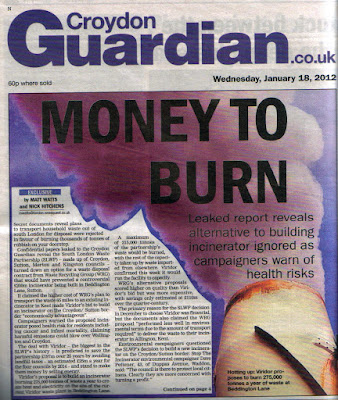 One would have probably assumed that burning South London's waste in Kent would be more preferable to local councillors than Beddington Lane (borders of Sutton and Croydon). WRONG; money Money MONEY is more important than a) nimbyism and b) recycling.

Instead, what our councillors have ensured is that in 15/20 years time when we as a society will have no choice but to reuse, recycle and compost all our waste, because of increased demand of raw materials from emerging economies, we will end up sending our recyclables to the local, all polluting, incinerator OR import waste from elsewhere to feed the beast.

Of course, the correct solution is not to incinerate anywhere - as my comment states (link to online version).

Just to clarify, they could have taken the ultra attractive option of basking in the glory of sending all of South London's waste outside of South London for another county to manage BUT they choose not to. I am incredulous that they have taken this decision.