I am a Croydon Athletic supporter. Saturday 6th March 2016 was derby day.  I met up with a friend at The Horsehoe pub on Thornton Heath pond to watch Tottenham v Arsenal, and after that game we walked down Silverleigh Road to the Mayfields Stadium to watch AFC Croydon Athletic v Croydon FC.

It was my first ever Croydon derby. A fixture between these two Croydon clubs is a rarity. Not only have these two clubs been in different divisions, but also in different leagues over the past few seasons.

Upon going through the turnstiles, I was immediately surprised by the number of supporters behind the Croydon (Trams) goal, the preferred location for the Croydon Athletic Rams Army. It seemed like a number of occasional attendees had made a special effort for the clash between Rams v Trams. I've been going to Mayfields since the 2006-07 season, and it was about as populated as its ever been behind the goal,

I usually bring a drum with me, which in recent matches has been played by young James who comes with his mum and dad. James was keen to have the drum again.

A quick scan of the terraces and stands indicated that the Trams had not bought many fans with them.

After the first Croydon Athletic attack, James had started the familiar 'Da-Da... Da-Da-Da...Da-Da-Da-Da' drum beat which finishes with the supporters chanting 'Croydon.' As if in auto-response mode, upon hearing the beat, I chanted Croydon with only a handful of others, only to see Mick look over at us and say, "think about it..."

Banter with Croydon keeper, Francis Ameyaw, started early with a rendition of the saxaphone solo from the Pink Panther theme. Well, what do you expect if you turn up to play in dayglo pink!

There ought to be a fierce rivalry between the Rams and the Trams but I have never got a sense that has been the case. Tackles weren't really flying on Saturday. There was one moment, shortly after commencement of the second half, when a couple of players confronted each other - but that happens in every game nowadays.

Croydon FC have hovered around the foot of the Southern Counties East - Premier Division for most of the season, whereas Croydon Athletic have been floating around the top half. If the league table is supposed to reflect the comparative standard of each team then it was wholly accurate with regards to this fixture.

The Rams took the lead in the 11th minute through a cool finish from striker Lee Jansen. In the 28th minute, top scorer Raheem Sterling-Parker was upended by goalkeeper Ameyaw resulting in a penalty. There's only one Raheem Sterling took the penalty himself and calmly slotted it away. Athletic pushed for a third goal but never seemed to get into a high gear. At the other end of the pitch the Rams keeper was largely untroubled.

In the second half, Athletic continued to control the game but found it difficult to add to their lead. I got the sense that the Rams were coasting to the finish line when out of the blue Lauris Chin pulled a goal back after a defensive mishap. Manager Anthony Williams went ballistic and screamed and shouted at the defence. Any complacency which had set in was soon erased and the Rams held on to win 2-1.

How to deliver a very Tory budget.

Dave: "Isn't it a bit heavy on cut taxes for the rich and cut benefits for the disabled?

IC No 1: "Not forgetting the wholesale privitsation of all schools through the academies programme."

Dave: "Not to mention public debt is rising and you're not going to make your budget surplus target."

IC No.1: "What's that fellow Oliver off the TV lathering himself up about nowadays."

Dave: "No, you mean the 'sugar tax' on fizzy drinks? Yes, Sam mentioned it the other night."

IC No. 1: "Yes that's perfect! Give the corporations some time to administer a substitute like aspartame. The papers will be all over the 'sugar tax' story like a rash. The more controversial stuff will be in the inside pages. I'll have a word with you know who."

(Within 30 minutes the Home Secretary has joined the meeting. IC No.2 is giving her instructions)

IC No. 2: "So, are you okay with this? You'll have to make sure you sit to the left of George for maximum impact."

Theresa: "Yes. I think I have just the outfit."

Dave: "Are you sure you're okay with this, Teri? We need you and the 'sugar tax' to occupy the headlines if we're to slip this other stuff through."

Theresa: "So long as I can choose the colour Prime Minister."

IC No.1: "Twitter will go into meltdown over your cleavage, I am sure!"

(The next day - midway through George Osborne's speech)

George [turns to Theresa] : "Good show Teri, I think our plan will work." 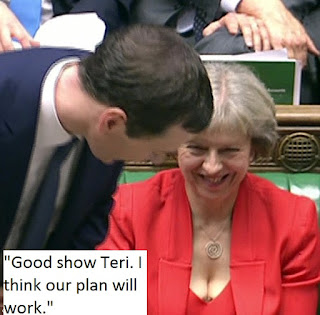