Health Impact Assessment for the incinerator

On 19 March, a few of us went to the Beddington Conference Centre to be presented with a rather one-sided view of the health impacts of the proposed incinerator. I recorded some of the meeting with ERM's Roger Barrowcliff on my mobile (above). The meeting overran by 1 hour 20 minutes such was the desire to register our point of view. Jim Duffy was sufficiently moved to send in a letter to the local papers almost instantly.

Viridor may have made a mistake in contracting someone with strong pro-incinerator views to conduct its own Health Impact Assessment as this may backfire on them. At its recent workshop in Beddington an Energy-from-Waste expert attacked scientists voicing criticism of polluting incinerators as akin to climate-change deniers. This is an extreme view.

Climate change-deniers typically have a financial incentive in making their claims or are backed by commercial companies. On the other hand scientists who condemn incinerator emissions as harmful to health do so from a position of concern, often about local communities such as ours and forgoing lucrative contracts from commercial companies due to their views.

The meeting, unlike most workshops which have an egalitarian approach, centred on the speaker's comments and was mostly an unchaired question-and-answer session. There were no interactions amongst the participants whereby for example the group could build up a consensus on key concerns. Instead the speaker batted back concerns raised one at a time. Three local businessmen walked out midway declaring contempt for the biased view of the speaker.

Despite his unflinching assertion that incinerators were safe he did however show concern at South London Waste Plan's permission to burn radioactive and hazardous waste at the incinerator. He said the high population should have ruled this out but participants gave examples of city incinerators which do burn streams of radioactive waste.

When asked if a baseline study of local health would be set up using Government data against which any health effects in coming years could be measured he was vague and merely offered a 'social and health profile'.

If, as participants fear, Viridor's Health Impact Assessment turns out to be a whitewash that may prove more provocative than helpful.

Gordon's letter in the paper. 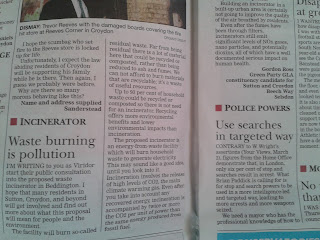 Published in the latest Croydon Advertiser, it can be read here

Tags croydon, greenparty
Posted by Shasha Khan at 8:54 am No comments: 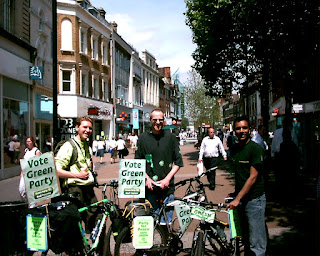 We live in a society where car is king, and drivers are behind the wheels of motor vehicles that are built do 120mph not 20mph. Living in an outer London borough means we don't have adequate public transport alternatives unlike inner London boroughs, so its really good that the benefits of a 20mph are filtering through to the Croydon public.

What is an incinerator?