Commitment to waste reduction is missing 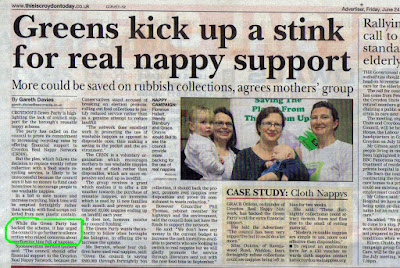 Today's Advertiser has a piece (online version here) that ultimately exposes this Tory council's lack of comprehension on effective waste policy and non existent green credentials. Here was a chance to placate those worried about nappies left in bins [something Croydon Labour are hammering for maximum political gain], support a cash strapped voluntary organsiation and reduce this borough's landfill tax bill.

An interesting observation from Grace@CRNN: Many parents who have recently emigrated from developing countries would ordinarily choose reusable nappies back home, however disposable nappies are seen as an advancement.

We live incredibly busy lives BUT with incentives, support and promotion a lot more parents of new born children would give real nappies a go.

The Croydon Green Party, in continuing to welcome the changes to waste collection, today urges the council to go further still.

Bernice Golberg said, “We are aware of concerns amongst some of the borough's residents, one of which is the issue of lingering smells from disposable nappies in wheelie bins.

“The council should now offer far greater support to Croydon Real Nappy Network (CRNN) because the Conservatives stand accused of breaking an election promise, rolling out food collections to justify a reduced service rather than a genuine attempt to reduce landfill, and paying little thought to potential health hazards.

“CRNN do excellent work in promoting the use of washable nappies as opposed to disposable ones, thus making a saving to the pocket and the environment.

“For years, the two volunteers behind the project have been operating on meagre funding and there are fears CRNN will have to shut down. Given the council is making a £600,000 saving through fortnightly bin collections, Croydon Green Party calls upon the council to back the project, promote real nappies over disposable ones, and prove its commitment to waste reduction.”

Croydon Green Party supports a zero waste strategy, where the amount of waste sent to landfill is slashed in favour of a reduce, reuse, recycle and compost structure. Fortnightly bin collections and weekly food waste collection, planned for October, are two stops on the road towards this goal.

Bernice Golberg continued, “Currently CRNN offer an introductory voucher of £30 (1) in Croydon. On average 15 new users take up this offer every month. This number is low given that the number of births per month is around 400 in Croydon.

“Other London boroughs, such as Islington, offer a voucher valued at £54. Croydon Council should target a minimum of 150 users per month, a tenfold increase, and fund the project accordingly (2). At just 15 users per month, CRNN estimate that they already save 33,000 nappies from ending up in landfill per year (3).

(1) If you live in the London Borough of Croydon and you are expecting a baby or have one or more children in nappies, you could be entitled to claim a voucher towards the cost of your purchase of real nappies up to the value of £30.

(2) The level of funding should be sufficient to allow for significant promotional and marketing campaign and to allow for administrative costs. 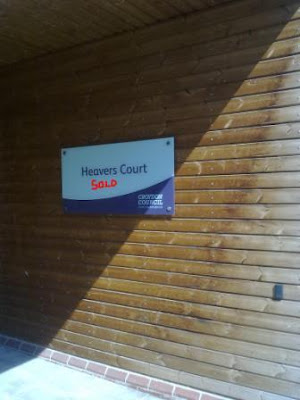 Green Party member, Ross Hemingway said: "The elderly and most vulnerable in Croydon are not customers who can come and go but patients who must be treated with the dignity.

"Where care services are provided with profit in mind, we will continue to see the low cost options taken; the inevitable low wages, untrained staff and ultimately poor quality of care.

“We must stop treating care homes like profit-driven businesses and see them as valuable public services to be properly funded and freely accessible. Labour councils across the country have rushed to cash in on care homes too. So whilst I am pleased to see Labour councillors in Croydon are also keen to stop the takeover of these care homes, they need to challenge the council from a principled position otherwise they appear to be just trying score points. “ 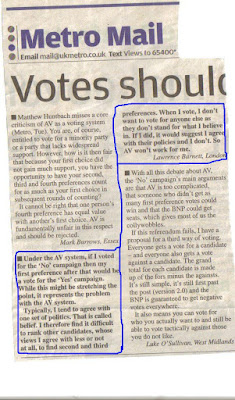 I blogged last month about the letter above. I was so incensed by it, I contacted the Press Complaints Commission (PCC). The main thrust of my argument was:

By printing a letter they [METRO] have undue influence in an important referendum. METRO wouldn't publish a letter saying a vote for Ken Livingstone next year is wasted because of changes to the Greater London Authority Act 2007. Why? becuase it's complete nonsense, BUT apparently it is acceptable to publish a letter that is nonsense, yet can pass as fact to influence voters in a referendum. Is this fair?

The Complaints Officer replied with the following:

[Mr Khan] The Commission members have asked me to thank you for giving them the opportunity to consider the points you raise. However, their decision is that there has been no breach of the Code in this case. A full explanation of the Commission’s decision is attached (below).

Although the Commissioners have come to this view, they have asked me to send a copy of your letter to the editor so that they are aware of your concerns.

Commission’s decision in the case of

The letters page of a newspaper has traditionally been a forum in which readers can express their views freely. Readers of this page would understand that the opinions expressed in the published correspondence would not necessarily be impartial or represent statements of facts, but rather the personal views of the correspondent. In regard to the letter in contention, the Commission considered that readers would understand that the complainant was expressing his position on the concept of AV generally, rather than making any specific statement about the voting system and the number of candidates you were required to vote for. In light of this, the Commission could not establish a breach of Clause 1 (Accuracy) of the Editors’ Code of Practice.

The complainant had pointed out that the newspaper had failed to publish his letter in response. The selection of material, including readers’ letters, for publication is matter for the discretion of individual editors and, as such, it could not comment on the matter further.

"Readers of this page would understand that the opinions expressed in the published correspondence would not necessarily be impartial or represent statements of facts, but rather the personal views of the correspondent."

Labels: Referendum on the voting system 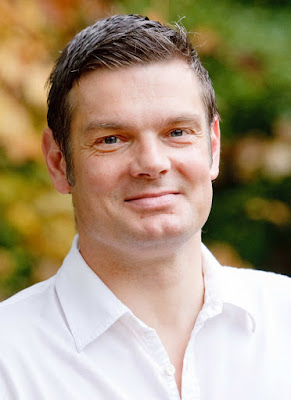 Sutton and Croydon Green Party is delighted to announce Gordon Ross as the Green Party candidate for the Greater London Authority (GLA) constituency of Croydon and Sutton. The Mayoral and Assembly elections are scheduled for Spring next year. Gordon won the nomination earlier in the week.

After standing as the candidate in 2004 and in 2008, I decided not to put my name forward for selection. It can be a tough slog mainly because the constituency is so vast but the tireless Gordon has the experience and talent for this demanding role.

Last year Gordon stood as Green Party General Election candidate for Croydon South, where he polled nearly 1000 votes in a constituency that never previously had a Green candidate.

The brinkmanship that exists at the town hall has reared its ugly head again, this time over the issue of bin collections. The Tory controlled council plans to introduce fortnightly bin collections in October, a move that will save £600,000.

The council is also introducing a weekly food waste collection, through a two phase roll out – don’t be surprised if the marginal wards of Waddon, Addiscombe, Upper Norwood and South Norwood get the service first or last, depending on what the Tories perceive to be the public reaction to the fortnightly bin collection. If they could, and it is not outside the realm of possibility, the Tory council would introduce a food waste collection whilst maintaining the weekly bin collection in these wards (at least until June 2014), especially in Waddon! Such is the political landscape of Croydon, so long as the Tories hold on to their three seats in Waddon and retain their safe seats in the south, the Conservatives will end up controlling the council at the next cycle.

In the run up to the 2010 council elections in Croydon, the Tories maximised the revelation that Labour were planning to roll out fortnightly bin collections in their literature. Arguably, the weekly refuse collection figures prominently in the mind of voters when asked to name services the council provides. This may explain why Croydon Labour is calling for Cllr Phil Thomas, the cabinet member for the environment, to resign. No thought for the overall ball game, see the shot; take the shot. Unsurprisingly, Cllr Thomas is using our position as political cover. Croydon Green Party was asked to comment on Croydon Council moving to a weekly food waste collection along with a fortnightly bin collection.

"We welcome this initiative but it needs to be coupled with an awareness raising and an information programme. Lots of people won't know what they should be doing with this new box. They need to know what to do and why they need to do it. We would like to see kerbside recycling extended to collect batteries, tetrapaks and those plastics which aren't presently collected; margarine tubs and yoghurt pots"

A pitiful number of Black police officers in Croydon. 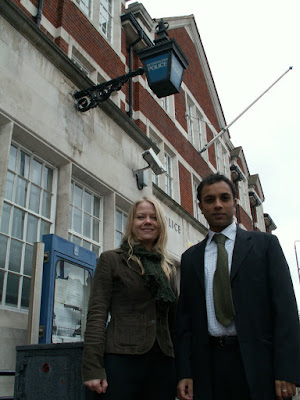 Croydon Advertiser invited me to comment on data received using FOI showing a pitiful number of black police officers based in Croydon.

Only two per cent of Croydon police officer are black

These numbers are hardly surprising given that the Met is still perceived to be institutionally racist by the Black Police Officers Association. Given this label still hangs around the Met, it’s going to be difficult to increase the number of officers from black communities. The fact that Safer Neighbourhood Teams in Croydon are under review because of the cuts won’t help the situation. PCSO’s do some excellent work within schools that help pull down the historical barriers of mistrust that still exist for Black and Asian communities with regard to relations with the police.

I don’t know anyone Black or Asian who is a police officer. I do however know many people of BME origin who are public servants. This also suggests that ethnic minorities don’t see opportunities for career progression within the Met. 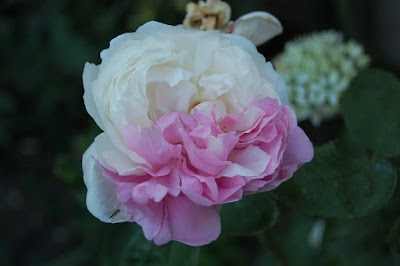 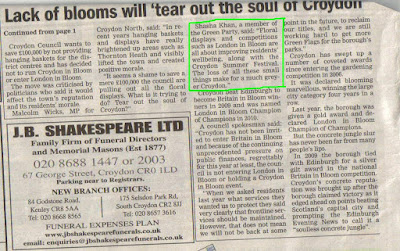 Reporting on the council's plans not run Croydon in Bloom and save £100,000 by not providing hanging baskets, the frontpage headline of this weeks Croydon Guardian reads, "Blooming Shame". I actually brought this issue up with the Mayor of Croydon at Saturday's Croydon Green Fair. He responded in characteristic Tory fashion that it was good to give other borough's across the capital the opportunity to win London in Bloom. Sigh.

Link to online version of the story

Director Vicki Lesley presented four of her short films at May's Croydon Green Party meeting. Her company Tenner Films produces clever shorts that "explore personal stories and social impacts of the world's most controversial energy source nuclear power." Vicki had received good news on the day of the meeting because her film, 'A Modest Proposal' (above), had just been nominated for an award. As it turned out, the budding film critics within our local party also felt that this was the best film!! In the Q and A afterwards, Vicki explained how complicated and expensive it was to get permission to film beside a nuclear power station. Vicki plans to direct a full length feature documentary on atomic power.

Thanks again Vicki for coming to see us. We thoroughly enjoyed the films and wish you well for your future projects. Don't forget to come and see us when you're nominated in Cannes :-)