Its been four years in the making. This blog does not welcome application no.66220, submitted a couple of weeks ago with Sutton Council.
To view Viridor's incinerator application visit:
http://213.122.180.105/FASTWEB/welcome.asp and type in 66220 in the search field.   Note: If you plan to print the application, I recommend buying a new toner and another ream of paper.


Over the last couple of months the four candidates for the post of Leader of the Green Party of England and Wales have been touring the country visiting local parties and attending hustings. There was even an hour long special on Iain Dale's show on LBC (link here).

We in Croydon have had the pleasure of hearing from all four of the candidates at our local party meetings. Both London based candidates, Natalie Bennett and Romayne Phoenix came to see us in person, and due to difficulties in scheduling we heard from Pippa Bartolotti and Peter Cranie using skype.

Filling the shoes of the multi-award winning politician Caroline Lucas MP is not going to be easy, but through our guest visits, we got to learn more about the vision, talents and attributes of the respective candidates.

I deliberately asked the same question to each of the candidates in order to gauge their thinking!?:


*Only today did I try and search for the source of this statistic.

[In order of their guest visit]

Natalie's answer mentioned the fact that in years gone by, employees that wanted to stand out from their colleagues, with a view to progressing up the career ladder, would work more of the lunch hours. But workers now are a having to work through most of the lunch hours just to retain their current position.

Romayne's answer referred to the importance of Trade Union membership linking this with the fact that terms and conditions were not protected. She also stated that emails meant that work was coming in at all times. She concluded by saying that she would ask the Croydon resident to check their contract.

Peter's answer noted the changing culture of the working environment and the important role that unions play in the workplace. He also talked about the responsibility of employers to their employees.

Pippa's answer compared Germany's workplace with the UK's. In Germany people aren't worked as hard and they end up being more productive. In reality, an employee is actually only productive for two hours in their working day. She also spoke how companies too often try to ring out every shred of work out of their workers.

All the candidates handled the question excellently, focusing on what could be argued their particular viewpoint. 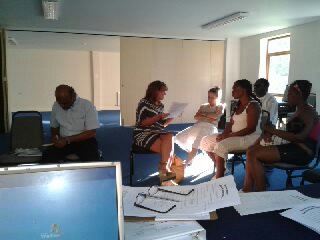 I've been involved with a the Bensham Manor Community Association for over 5 years now, first as a member, then secretary and now secretary and trustee. The group has been working with two Labour councillors to deliver a community centre as part of a section 106 agreement.

After years of effort, the building is now ready for use. It is available for hire as a function room.

Above is a picture I took at the last meeting.

On Inside Croydon, local figures have been invited to submit accounts of their experiences on 8th August 2012. There is so much elation in London due to the Olympic Games at the moment. A year ago it was dejection. The contrast couldn't be more stark.

My submission can be found here.