Burning tyres and not a riot in sight 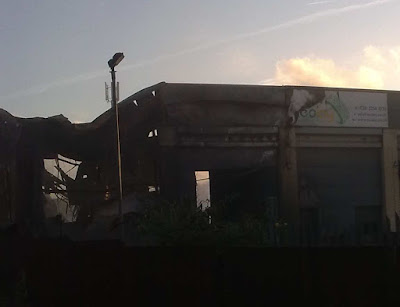 Burning tyre factory on Purley Way
During AOB discussions about the fire at the tyre recycling plant at the latest local party meeting, members from Fairfield, Selhurst, Broad Green and Bensham Manor wards all said they were woken by the smell of burning tyres on the morning of 22nd September. Given that burning tyres emit nasties including, sulpher dioxide and carbon monoxide, Gordon Ross, our GLA candidate, has been on the case to find out whether there was any risk to those that lived nearby the plant. Below is the response from the Health Protection Agency:

What monitoring of the run-off water was carried out/will be carried out (as there are nearby streams)?

What advice was given to members of the public at the time regarding the smoke?

The fire which started on 22nd September 2011, was in a tyre recycling centre located on an industrial estate in Croydon. The Fire Brigade has been responding to the situation and the Health Protection Agency has been in regular contact with the Fire Brigade. In response to enquiries to the HPA from members of the public about smoke from this fire, advice was given around standard precautions such as closing windows and doors and remaining indoors, in the vicinity of smoke.

I have talked to a pollution officer at the Council, and to the people involved in monitoring the fire / water run off at the HPA and the Environment Agency. The EA has had officers on site during the fire, and testing the water in the Wandle [foam was seen in the river Wandle], and checking the wildlife on the Wandle.

They don't have environmental or health concerns about the fire and the run-off, saying the smoke dissipated and the run-off has produced no recorded death of fish or invertebrates. They are continuing the monitoring. They all seemed very diligent, and were helpful in answering my questions.
The smoke would be toxic , if you breathed enough, but the site is 500m from homes, and the EA and HPA both said it wasn't a big enough threat to require and action beyond " keeping your doors and windows closed."

I have been advised the foam is designed to be as low toxicity as possible, and to only give a low O2 load when in rivers.
Obviously the black soot from burning tyres will contain all kinds of nasty combustion products, and heavy metals.

The EA told me it will be washed down the river, it is diluted, and they will keep monitoring for any effects on fish and wildlife.

'Don't Mention the Riots' reported in the local paper 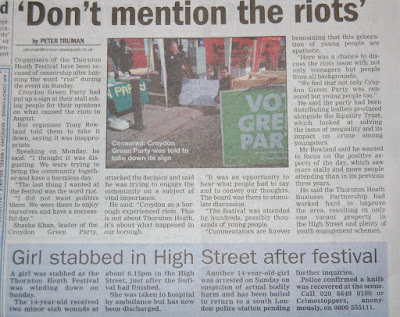 As a result of our tweeting and blogging, the decision to censor Croydon Green Party from displaying a board which read 'What Caused The Riots?' was reported in the Croydon Guardian. I would hope Tony Rowland, the gentleman quoted in the paper, upon reflection realises that the strategy not to allow or display anything relating to embarrassing instances in history is the hallmark of every regime that shuns democracy. Yes discussing the riots maybe uncomfortable, and we as a party were not gung ho about displaying the board, BUT given the local riot inquiry is only running for a couple of weeks, Croydon Green Party feels an opportunity to properly engage with community was missed.

Arguably, it was the reaction of those who noticed the board, before we were asked to take it down, that confirmed our position. No one complained, instead people offered suggestions:

In a recent exchange in the London Assembly, Green Party Mayoral candidate, Jenny Jones AM, exposes a flawed policy resulting in a cornered BoJo flying off the handle.

Festival goers dancing on Thornton Heath High Street
Yesterday's Thornton Heath Festival was again very well attended. Incredibly despite all the forecasts saying it would, IT DIDN'T RAIN!! Our stall was very close to the sound system which dominated the event towards the end of the day. 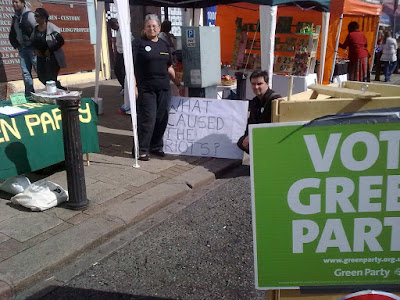 Bernice Golberg and Brendan Walsh and the board with the word riot.

The above photo was taken...well for the purposes of taking the photo!! Earlier in the day, shortly after the festival was officially opened, we were asked to take down our, 'What Caused The Riots?' board by one of the organisers.

To observers it must have been a peculiar scene. Cllr David Fitze the Deputy Mayor, the aforementioned Organiser, who I think was member of the Thornton Heath Business Partnership and a couple of burly stewards in fervent discussion in front of the Green Party stall.

The Organiser told us, "We don't want the word riot appearing anywhere." He qualified this by saying, "Thornton Heath did not experience any riots.". We responded by saying that, "Croydon as a borough experienced riots. This is not about Thornton Heath its about what happened in our borough. Its an opportunity to hear what people have to say and to convey our thoughts. The board was there to stimulate discussion."

We explained that we had contacted The Equality Trust for their analysis and they had kindly produced a leaflet for us to distribute (see below). At this point I remember giving said leaflet to the Chief Steward and the Deputy Mayor. The Deputy Mayor seemed taken aback by the Organiser's insistence, which we incidentally respectfully obliged, and turned to the Organiser and said, "I was going to very briefly mention the riots in my speech!"

Despite the lack of signage, we spoke to many residents about the riots, including Malcolm Wicks MP. He too seemed surprised about the Organiser's decision. When we explained what had happened to supporters and those who came to our stall, nearly all said that Thornton Heath did experience the riots. The Cash Plus opposite the leisure centre [on the site of the festival] had its windows smashed.

THE KEY THING IS THIS: The festival was attended by hundreds, possibly thousands of young people. Commentators are forever bemoaning that this generation of young people are apathetic. Here was a chance to discuss the riots issue with not only teenagers but people from all backgrounds. We feel that not only the Croydon Green Party was censored but young people too. 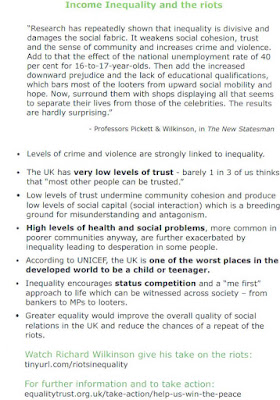 Weapons of mass destruction on sale in Newham!


Great to see that Chris Smith, Green party GLA candidate for the City and East constituency, which encompasses Tower Hamlets, Newham, Barking and Dagenham and City of London, has called on the Mayor of Newham to ban the largest arms fair in the world - held at the ExCel centre in Docklands (London borough of Newham). The Fair which opened yesterday continues to run year on year despite opposition from local people.

According to an interactive map on the Campaign Against the Arms Trade web site, Atkins Global, a firm which has an office in Addiscombe, exhibits at the Fair.

Will Croydon need an evac plan?

An EDF spokesman said: "According to our initial information it was an explosion in an oven used to melt metallic radioactive waste of a low level and very low-level radioactivity. In this kind of furnace there are two kinds of waste – metal waste (hatches, pumps, tools) and combustible waste like gloves or workers' overalls."

Yesterdays Grauniad carried a piece regarding an explosion at a French nuclear waste plant. Members of the Stop the Incinerator campaign are circulating this piece because we have every reason to believe that a waste plant handling very low-level radioactive waste could be built, extraordinarily without the need for planning permission, within the four boroughs of Kingston, Merton, Sutton and Croydon.

No need for planning to incinerate radioactive waste.

The council (1) must explain why they have added a paragraph to the South London Waste Plan that allows a new facility to be built anywhere in Croydon that can incinerate hazardous waste and radioactive waste (2) without the need for a waste company to apply for planning permission.

4.60a ….planning permission for additional facilities for other waste streams including Construction, Demolition and Excavation Waste, Hazardous Waste, Agricultural Waste, Clinical Waste, Radioactive Waste and Waste Water will be permitted provided there is identified need and the proposal meets the other policies of the South London Waste Plan.

Page 41, Section 4.33 defines Radioactive waste as a “product of a nuclear process such as nuclear fission”

“Councillors have rendered themselves voluntarily impotent. Health damaging decisions are being taken right under their noses whilst they sit idle. One begins to wonder why councillors are turning a blind eye time and time again on this issue (3) Waste companies must be seeing pound signs flashing in front of their eyes if they are able to incinerate highly dangerous and yet highly profitable waste streams without the need for a planning application. “

(1) Croydon council, along with Kingston, Merton and Sutton councils make up the South London Waste Partnership

(2) Page 41 Section 4.33 defines Radioactive waste as a “product of a nuclear process such as nuclear fission.” 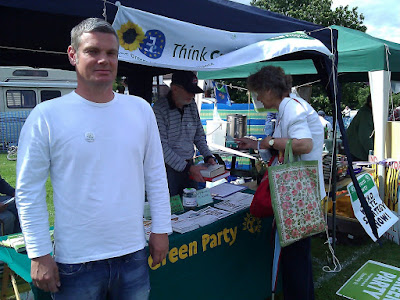 Gordon Ross: Green Party GLA candidate for Croydon and Sutton in front of the GP stall at the excellent Carshalton Environmental Fair. 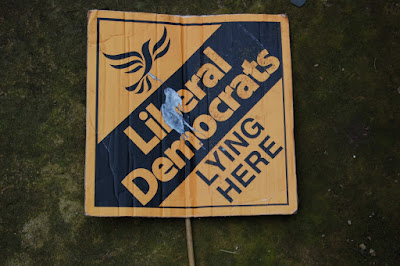 I took along a selection of placards and posters for our stall at the Fair, including this humorous adaptation of the Lib Dem logo that I picked up at the Tuition Fees demo in London. Given that Carshalton is in the London borough of Sutton, and Sutton is a Lib Dem council, I thought it might be an amusing way to stimulate discussion, especially as we were allocated a pitch beside the Lib Dem stall. We pinned it to the top of the gazebo. A few minutes later a representative from the Love For All, Hatred for None stall, a very worthwhile campaign conducted by the Ahmadi muslims, came over to speak to us. He explained that the 'Lib Dems Lying Here' sign was out of kilter with the ethos of the fair, "You the Green Party have a positive message, we [pointing to his stall] have a positive message. This sign feels wrong." He had a point. So after chatting to a colleague we took the sign the down.

A little while later, I had a brief conversation with the rep. He told me his name was Nasser Butt. I asked him who he voted for?! He replied that today was a not a day to talk about politics. Fair enough!

Towards the end of the day I bumped into him again. He asked me how long I had been in the Green Party. My curiosity got the better of me and I asked him if he was a member of a political party. After initially circumventing the question, he told me he was a member of the Lib Dems, and that he been a Lib Dem General Election candidate in Tooting last year and Mole Valley in 2005!!!!

I came home and googled him and found out that Nasser Butt had also been a councillor in Sutton!!

Loads of good bands at the Fair including the fabulous Zero Carbon Band, which features a couple of Green Party members. However, my favourite on the day was Folie Ordinaire. The funky lead singer gave me a business card after their gig. They've got an excellent song called Banker: 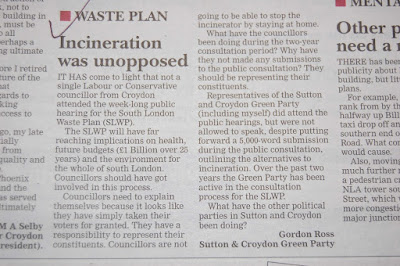 Shop them then shop 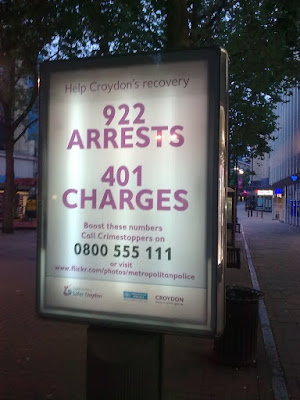 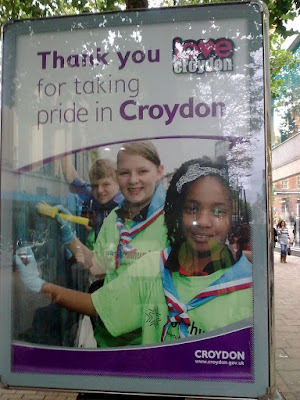 
Croydon Council's marketing team have been working overtime to reassure shoppers and residents that all is safe and well in the borough. Fortunately, the arrangement with JC DECAUX has given the Council a ready-made opportunity to get their message out there. It will take time to calculate whether the 'Shop them then shop' strategy has worked.

I was recently advised by a local youth worker that out of the 922 arrested and 401 charged, "only about 24 were young people."