Members of Croydon Green Party will join 38,000 other cyclists this Sunday (23rd September 2007) for the Hovis London Freewheel. In fact registrations for the event reached capacity two weeks ago.

Spokesperson for Croydon Green Party, Shasha Khan, said:“The fantastic response to the event just goes to show how many cyclists will take to the roads if they were made much safer.”

It is estimated that 40 per cent of Londoners have access to a bike, but only five per cent use one regularly (1)Metropolitan Police research has revealed that 63% of motorists break the capital's 30mph speed limit.

As well as being a major cause of death and injury, the intimidation caused by speeding traffic is a key factor dissuading more Londoners from getting on their bikes. (2)The Green Party has consistently called for a 20mph speed limit in London’s residential areas. It is estimated that this measure would save up to 200 lives and 25,000 injuries.

Shasha Khan continued:“Reducing the standard speed limit in Croydon’s residential areas is one way to encourage more people to cycle to work or school. Another measure is to improve cycle route design in Croydon. The council acknowledges there are many urgent cycle route corrections that need to be carried out in the borough. On 2nd July I wrote to Tory Council Leader Mike Fisher to join me in a cycle ride around Croydon so that he could experience the dangers that cyclists endure. I am sad to say that despite receiving an acknowledgement card, to date I have not received a reply. “ 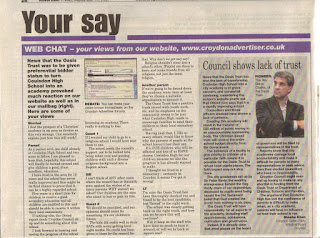 News that The Oasis Trust has won the task of transforming Coulsdon High School into a City Academy is of grave concern and somewhat confusing considering the schools’ web site points out that Ofsted now say that Coulsdon High is a rapidly improving school.

Councillors and those officers involved in this decision have shown a lack of patience with this school.

Creating this academy will result in the transfer of £25 million of public money to an unaccountable sponsoring body – the Christian based Oasis Trust. They will receive the entire school budget directly from the Government.

The existence of a facility to give priority to children of a particular faith means it is possible for The Oasis Trust to refuse places to local pupils. The impact of faith may not stop there. The City Academies set up Sir Peter Vardy, the wealthy entrepreneur behind the Reg Vardy chain of car dealerships, disclosed that its pupils were being taught the Old Testament belief that God created the world from nothing in six days.

The Oasis Trust will have responsibility for all aspects of the Academy, including staff appointments, pupil admissions, curriculum and governance arrangements. Indeed it is already clear that most spots on the board of governors will be filled by representatives of the trust.

Reports show that City Academies damage the operation of local accountability, breaking the links between parents and elected councillors. Croydon Council will have no responsibility for this Academy, but may still end up having to make up any shortfall in funding from the Oasis Trust or Department of Children Schools and families.

The argument that Coulsdon High has lost the confidence of local parents is difficult to make when one considers that as a City Academy, local parents will end up having NO influence on how their local school is run. 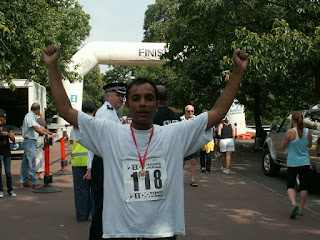 Greens in the papers