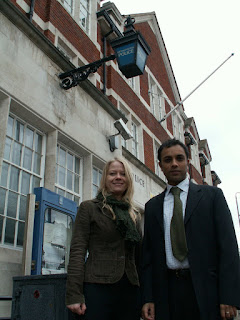 Photocall opportunity:
11am, Friday 22nd February 2008; outside Norbury Police Station, 1516 London Road, Norbury, London, SW16 4ES. Croydon and Sutton candidate Shasha Khan and London Mayor candidate Siân Berry
Siân Berry, the Green Party's candidate for London Mayor, will visit Croydon on Friday (22nd February) to launch the London Assembly campaign of Green Part candidate for Croydon and Sutton Shasha Khan.
The candidates will be highlighting the need for more police on the streets.
Croydon could see burglaries halved under a Green Mayor with Siân Berry's plan to provide Safer Neighbourhood Team patrols round-the-clock. A pilot in Fulham cut the rate of residential burglaries by 52% [1], and the Greens argue that officers should be diverted from less vital areas to improve street-level policing.
Shasha said:
"As a member of the ward panel for Bensham Manor Safer Neighbourhood Team, I can see first hand the deficiencies of the current policing strategy. We need more Police Constables and more Police Community Support Officers on the beat to make Croydon neighbourhoods feel safer.
"The most effective way to do that is through Safer Neighbourhood Teams - trusted officers who are known to their local community and who can do the vital work to reduce crime as well as prosecute it. Instead we have Gordon Brown pushing ID cards, Boris Johnson hinting at racial profiling and budget proposals from Ken Livingstone that would assign 297 officers to an Olympics still 4 years away. [2]
"We want to feel safe in our local area when we get home late in the evening and when we are asleep, not just during office hours. We'll beat crime not by tough-talking gimmicks, but by real community policing. Twenty-four-hour Safer Neighbourhood Teams have been shown to work in Fulham, and they will work in Croydon."
Siân said:
"Shasha is someone who really understands what is needed to cut crime on our streets - and it's not ID cards or macho posturing. Electing more Greens to the Assembly means proper community policing, and Shasha in particular has the experience to deliver that."
ENDS
Notes to editors
1. In the pilot, in the Fulham Broadway ward of Hammersmith and Fulham, residential burglaries in the Fulham Broadway ward dropping to 38 between April and September 2007, compared to 80 in the same period last year. Presently, Safer Neighbourhood Teams are not normally available after 6pm.
2. Green AM Jenny Jones, a member of the Metropolitan Police Authority, questioned the Mayor over this assignment at the budget committee meeting of the London Assembly on 19th December 2007. The Mayor’s budget papers for the coming year shows an increase of up to 297 extra officers to be employed on Olympics preparations and a further 300 police officers for dedicated security posts.
-------------------------------------------------
Tags croydon, greenparty
Posted by Shasha Khan at 5:32 pm No comments:

I was most interested to see an article in your paper on Conservative proposals on small-scale solar and small wind turbines (Novel power to the People – Jan 16th 2008). I was hoping to read about a new initiative from this Conservative council to boost levels of microgeneration. But instead what I found was the latest cycle of greenwash from the Tory spin machine designed to impress voters in Croydon. The web site the article points to merely highlights a speech made by David Cameron.

Are they hoping that readers will ignore Conservative Council’s - like the one in South Cambridgeshire - that are rejecting plans for wind farms on ‘visual grounds’. Or are the Tories hoping that readers will overlook the fact that Conservative London Assembly members have opposed budget measures, put forward by the Greens, designed to have a positive impact on the environment?
Or maybe – just maybe - they are asking readers to forget the fact that when David Cameron cycles to work his car follows behind with his briefcase?

In fact if the Conservatives are genuinely commiteed to the principle of decentralised power and microgeneration then why are we not seeing more from this council? Much more could be achieved if there was genuine commitment. Thanks to a couple of elected Greens in Huddersfield, Kirklees Council is now responsible for generating 5% of the UK's total solar energy.
At a time when energy prices are soaring, renewable energy can make life fairer for everyone and can generate hundreds of thousands of jobs but as long as this Conservative politicians and this council ignore the science and just listen to the politics then nothing will be achieved.

For immediate use: Friday 8th February 2008

“I am genuinely shocked that the members of the Committee took a mere 14 minutes to come to a decision to close Coulsdon High School on 31st August 2008 and transfer its assets to private sponsor Oasis Trust on a 125 year lease. It is clear to me that the councillors had no intention to reevaluate their plans to rush through the opening of the City Academy and any concerns raised have been brushed aside.

“Throughout the meeting the Tory councillors just nodded in agreement to extremely one-sided presentation given by Cllr Gatland.

“The Coulsdon East councillor, Chris Wright said that local residents were telling him that this is what they wanted. Yet, there is a very little documentary evidence for this. A paltry 130 questionnaires were completed during the public consultation at a cost of £100,000. That’s £770 per questionnaire.

“The irony is that when Oasis Coulsdon Academy opens, Councillor Wright will have no influence on the how the school is run as it will be out of the local education authority’s hands. So if any local resident raises concerns about the procedures at the school there is very little he can do.”

(2)The questionnaire can still be found online on the Croydon Council web site. 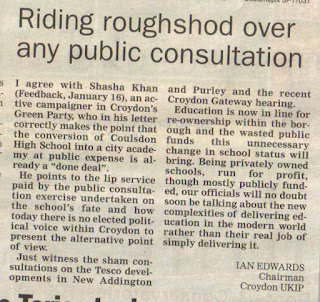 For immediate use: Tuesday 5th February 2008

“It has come to light that the total cost of holding this sham of a public consultation is close to £100,000. Consultants have been employed, papers have been printed and the net return is a paltry 130 questionnaires (2). Surely the Committee cannot regard this number as representative.

“It’s just another example of how poorly this consultation has been run. With only 130 questionnaires completed at a cost of £100,000, that’s about £770 per completed questionnaire. “

For immediate use: Monday 4th February 2008

“If the Committee genuinely wants a true representation of how local people feel about the proposed City Academy then the council should reopen the public consultation highlighting how successful the present management team has been in taking the school out of special measures and stop being so negative about the school in their presentations. If they want to circulate a questionnaire then the council should ask precise and unambiguous questions like:

Do you support the closure of Coulsdon High School on August 31st 2008 – and its subsequent reopening on 1st September 2008 as Oasis Academy Coulsdon owned by the private sponsor Oasis Trust? YES or NO

Last week the council published results of the consultation questionnaire suggesting that four out five respondents were in favour of the City Academy.

“I found the results baffling because I completed the questionnaire and couldn’t remember a question asking if I wanted Coulsdon High School to close and re open as a City Academy.

“Looking back at the questionnaire the only question remotely resembling such a statement is not categoric or definitive and emphasises the development of the Coulsdon High School through Oasis Academy Coulsdon.(2)

“A similar exercise run in Southwark to find out how they felt about a proposed City Academy had a much clearer question – asking for a yes, no answer.(3)

“I am hundred per cent convinced that if the questions were more transparent and precise – the results would have been different.

Instead of offering a balanced consultation the council has presented a false context, seemingly depicting a school that is failing in order to meet their preferred conclusion.

“The public meeting with the largest turnout did not even fall within the consultation period so none of the comments there are to be recorded on the final report. Many parents are under the impression they have contributed to the consultation by attending that meeting.”

(2)The questionnaire which can still be found online on the Croydon Council web site states:

The development of Oasis Academy Coulsdon at the proposed site of the existing Coulsdon High School, Homefield Road is a good idea.