This housing plan on Green Belt land is flawed but residents concerns are being dismissed. These include the scale, location, environmental impact, extra traffic and pressure on local schools. Can the plan revitalise Coulsdon and provide affordable homes?

Traffic is often gridlocked in nearby roads and houses near the top of Cane Hill will be remote from Coulsdon, increasing car-dependency. Developers’ claim - ‘no significant impact on congestion’ - is not credible. Existing parking space cannot absorb more cars, while Coulsdon’s public car park is to be replaced by a megastore. Local shops may suffer reduced trade, thwarting the aim of regeneration.

London’s housing crisis is shared by Croydon. But how will this development help first-time buyers and low income households in overcrowded homes or B&B? Only 25% of Cane Hill homes are designated ‘affordable’. If this means 3-5 times average local income and average Croydon earnings are £29,000pa, will 25% of homes be priced between £87,000-£145,000? Will the remaining 75% be within reach of local people on modest incomes? Or will Cane Hill attract wealthy buyers from far afield while bringing no reduction in house prices or housing need in Croydon? To address these, we must build more social housing for local people at affordable rents, end the Right to Buy and cap private rents.


The letter was published:


My Green party colleague Dr Jay Ginn sent in an excellent letter to the Croydon Advertiser regarding the Cane Hill development. A few weeks later the development was put on hold! Of course it would be churlish to attribute the decision to one letter, but Jay's letter was certainly part of the "public outcry". See link below.

Towards the end of last year a couple of articles appeared in the local paper which has helped further raise awareness of our campaign to stop the incinerator.We are grateful for Caroline Criado-Perez' and David Lindo's support.

Response to letter from Kristin Viedge

Occasionally a letter appears in the Croydon Advertiser which is pro-incineration. In the past the correspondent has been a waste industry stooge. This one appeared not to be..... 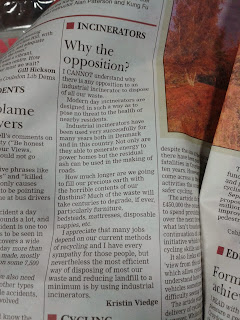 My response appeared a couple of weeks later...... 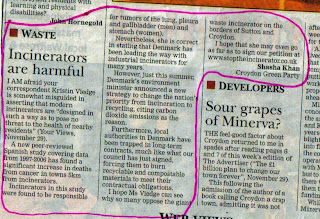 I am afraid your correspondent Kristin Viedge is somewhat misguided in asserting that modern incinerators are “designed in such a way as to pose no threat to the health of nearby residents.” A new peer reviewed Spanish study covering data from 1997-2006 has found a significant increase in dying from cancer in towns 5km from incinerators. Incinerators in this study were found to be responsible for tumors of the lung, pleura and gallbladder (men) and stomach (women).

Nevertheless, she is correct in stating that Denmark has been leading the way with industrial incinerators for many years. However, just this summer, Denmark’s environment minister announced a new strategy to change the nation’s priority from incineration to recycling, citing carbon dioxide emissions as the reason.

Furthermore, local authorities in Denmark have been trapped in long-term contracts, much like what our council has just signed, forcing them to burn recyclable and compostable materials to meet their contractual obligations.

I hope Ms Viedge can see why so many oppose the giant waste incinerator on the borders of Sutton and Croydon. I hope that she may even go as far as to sign our petition at www.stoptheincinerator.co.uk

My incinerator letter in the local Guardian papers

A new peer reviewed Spanish study covering data from 1997-2006 has found a significant increase in dying from cancer in towns 5km from waste incinerators. Incinerators in this study were found to be responsible for tumours of the lung, pleura and gallbladder (men) and stomach (women).

Relating to incinerators, a study by The International Agency for Research on Cancer has categorized ultrafine airborne particles containing cancer-causing substances as the most harmful to human health.

These findings are consistent with an article in Private Eye magazine in which an emissions tester for private company has cast doubt on the Environment Agency’s monitoring of the ultrafine particles from incinerators. These ultra-particles escape with the smoke through the chimney. They are so microscopic they evade the world’s most sophisticated filtration systems.

It is staggering that an application to build such an incinerator received approval by this council.

However, I still hold hope that the High Court will find the decision to approve unlawful in a judicial review. In the meantime, please to sign the petition on www.stoptheincinerator.co.uk