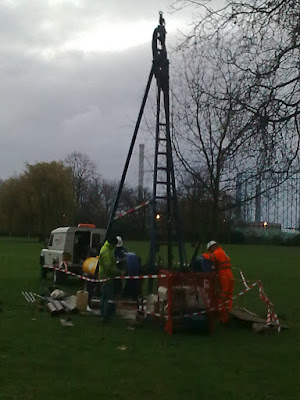 Projected cuts in central government grants have forced Croydon Council accountants to think outside the box. Last Tuesday contractors were found even digging for oil.

Park Vs Park in Croydon 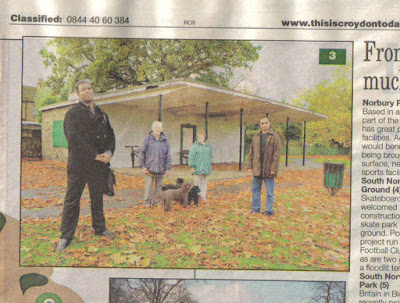 Paul, Bill, Gwen and myself looking like the (green) Space Sentinels 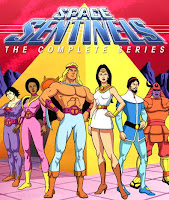 Six out a shortlist of eighteen parks are up for a share of £1.5 million. This process of competing for vital funding is increasingly the modus operandi used by the authorities. On the surface it seems fair but the reality is the most needy might not be successful.

I must give a plug for Thornton Heath Recreation Ground. Having missed out to Wandle Park last year in the Mayor's Vote for a London park competition, through questionable circumstances, the park I am involved with really needs your vote.

Croydon Advertiser ran a feature on the competition a few weeks back. Cuttings are from that piece. 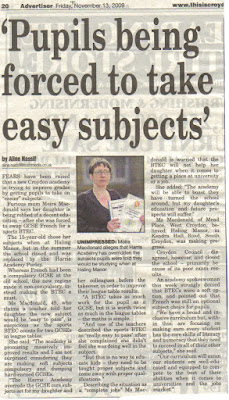 Ms McDonald’s experiences are exactly what our Croydon Save Our Schools campaign had been warning with regard to the forced takeover of Haling Manor by the Harris Federation (Pupils being forced to take easy subjects). Private sponsors of academies realise that there are three cheap ways to bump up their position on league tables. Firstly, use an entrance examination to filter out weaker pupils and offer places to a proportionately higher number of brighter pupils. Secondly, push children into taking BTECs instead of more difficult GCSE’s as these count as two GCSEs. Finally, exclude pupils that are deemed ‘problem kids’ as they will bring down your league table position. On this point, figures released by the government reveal that academies are permanently excluding twice as many pupils as state-funded secondary schools.

Jim's letter in the paper

There are some people that still deny that Climate Change is happening now and that we need to take action to stave off the worst effects for ourselves, our children, our grandchildren and successive generations.

As a way of understanding it I use what I call "The Front Room" analogy. Imagine that your front room/living space is a closed environment (like the Earth) and that you have no other rooms. If you filled the room with toxic fumes, rubbish and lit a fire in the centre of the room you and your family would not survive for long.

This is the position all of us face as a result of human made climate change on earth. It is said that Europeans need three earths and Americans need five to continue their lifestyles BUT we all only have one to last us all!

I would ask everyone to please consider this and make small changes in their everyday lives such as recycling, less car journeys,
less flying, care in use of resources and so on.

We don't have to return to the cave just adjust to a low carbon economy and all generations can enjoy a full life with just a tiny effort.

Best wishes to all
J Clugston

Linked to this article.

As a member of a Safer Neighbourhood Team ward panel I see the good work that PCSO’s do in terms of youth engagement in schools. However, upon reading figures your paper has obtained under the Freedom of Information Act, I am concerned that the benefits of this work are being undone. Like many, I was under the impression that PCSO’s did not have stop and search powers. So to find out that they have used this exceptional power 620 times in Croydon in 2008 under the Terrorism Act is nothing short of alarming. The Met Police maintain that stop and searches are intelligence-led, and rightly so, but I am afraid these figures smack of search under suspicion which can only adversely affect community relations.
The government continuously tells us that the Afghan war effort keeps our streets safe. Your report indicates a year upon year increase of usage of these powers and a mind boggling 62,000 per cent increase in stop and searches since 2004. Clearly one does not equate with the other.
Croydon already has more surveillance cameras than the whole of New York, and these stop and search revelations - coupled with the fact that armed police now patrol the streets of London to tackle gang crime - suggests that the direction of travel is towards a police state.
Should we not instead tackle the causes of terrorism and gang crime? Respectively, stop fighting unwinnable wars which act as recruiting sergeants for terrorist organisations, and address the sense of belonging, status, personal safety and peer pressure issues that push our young people to join gangs. 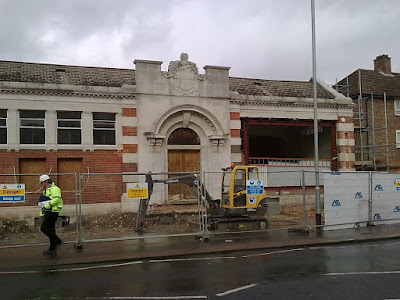 Being part of the steering group to redevelop Thornton Heath library has been one of the more straightforward projects I have been involved in. Aileen Cahill and Chris Carey have been very competent project managers. Work is due to be completed in April 2010. Below is the latest update:

The project seems to be on schedule, and there are visible signs of progress on the outside of the building. The stone work has been cleaned and looks as new, and openings have been created on the right hand side for the front glass pavilion to be attached. The side extensions, housing the lift & staircase, and the ICT suite and staff quarters respectively, are going up, and can be seen especially from the rear car park. Electrical work continues at pace. 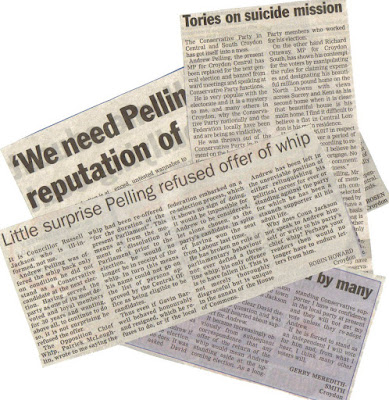 A selection of letters over the last few weeks
A couple of local residents have mentioned the dominance of Andrew Pelling related letters appearing in the local papers. A week doesn't seem to go by without one or two letters discussing the virtues of the MP for Croydon Central. There is little doubt he will stand as an independent in the next election even though he is still a Conservative Party member. The politics of his standing is intriguing: 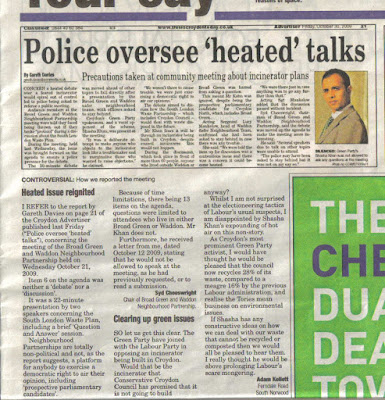 Very interesting to see Adam Kellett writing in..... He is a Conservative party member and was a candidate in Norbury ward back in 2006. The Tories seem to have adopted a new approach of making it look like residents are appalled by the apparent 'scaremongering'. Syd Cheeswright only succeeds in reaffirming the lack of public debate on this issue.
--------------------------------------------------
Tags croydon, greenparty
Posted by Shasha Khan at 9:31 am No comments: 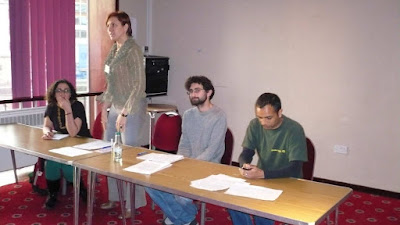 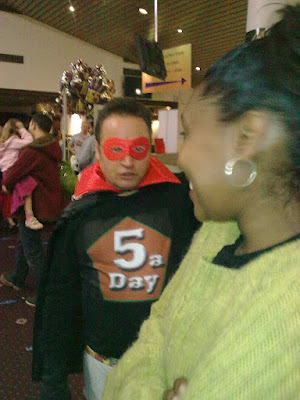 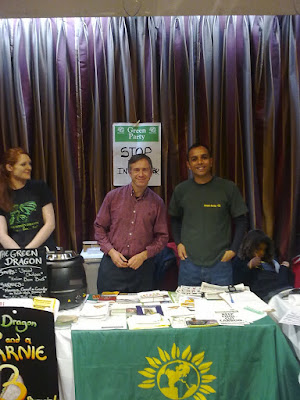 Barry, Shasha and Danni on the stall
Last Sunday's Veggie Fayre in Croydon, YES CROYDON, was a scrummy treat! Lots of food stalls including the Green Dragon who kindly shared their stall space with Croydon Green Party.

The Environment Panel consisted of:

The Q and A session that got us all thinking. It was probably the first question time type event where I was preaching to the converted. Thanks to Caroline Allen for coming down from Hackney to take part in the Animal Welfare panel.

LBC: the radio station originally known as the London Broadcasting Company, now recognised as London's Biggest Conversation. I sometimes refer to it as London Bigots Conversation as it attracts some small minded callers. The presenters also take a stance to provoke reaction, mostly - from what I have listened to - from the right of centre perspective. Having said that, Ken Livingstone presents a show on Saturday mornings.

The night before last I fell asleep listening to LBC. As a result, yesterday morning I woke up to a Vitriolic Nick Ferrari discussing a story that a judge had ruled that green beliefs deserve the same protection in the workplace as religion. It was bound to rile the listeners. Green London Assembly member Jenny Jones was interviewed on the show to give weight to Mr Justice Burton's decision. Jenny managed to articulate how Greens (big G) feel when we see wanton disregard for green (small g) issues.

This seemed to be followed by a volley of callers who could at best be described as Climate Change sceptics.

I felt compelled to fire up the computer and go online and email the show with the following:

Do you or your listeners believe the planet has enough resources to provide for the predicted population in 2050? If everyone wants to live like an American we need four planets; An European three planets. Given the levels of economic growth in India, China and Brazil, can a business as usual approach seriously work? We're already going to war for resources…remember Iraq? I bet you don’t read this out.

I have emailed James O'Brien's show in the past but with no success. UNBELIEVABLY - because I simply wasn't expecting it - Vitriolic Nick read out my email within minutes. He omitted the last sentence though. Okay I lost the bet!

Here is Madeleine Buntings much talked about piece

Madeleine Bunting’s comment was relief to read. I have passed the piece to others in a hope to stimulate thought. The reality is that market based decisions do not take into consideration social and environmental costs. Political leadership needs to be creative and visionary to counter the levels of injustice so many of us feel and experience. Electorally, it seems only the Green Party recognises that the success of a society cannot be measured by GDP, but should take account of factors affecting the quality of life for all people: personal freedom, social equity, health, happiness and human fulfillment. In fact, it is one of the ten core principles of the Green Party.