My letter to the Croydon Guardian caught the editors attention. They decided to run a story on the £2m spent on academisation. CROYDON COUNCIL'S RESPONSE NO COMMENT!!!!!!!!!!!

Disclosures under the Freedom Information Act have left many of us in Croydon Save Our Schools stunned. Over £2,000,000 of tax payers’ money has been spent by the Department of Children Schools and Families (DCSF) to change Haling Manor and Ashburton high schools into academies. Extraordinarily, these are just interim costs and we are still waiting for Croydon Council’s costs.

Much of the £2,000,000 has been spent on the feasibility of the proposal, legal and consultative related tasks plus management fees. It appears that the process of academisation is lucrative racket.

It’s awful to think that this money could have been spent on classroom support assistants, extra learning mentors, Saturday homework clubs and the like. The council’s mantra was that that these schools were failing. Closer inspection showed that this assessment was questionable. In particular, Haling Manor was deemed “outstanding” in several areas by Ofsted.

Given that a far higher proportion of the pupils who went to these schools had special education needs, this money would have gone a long way in giving the necessary support to pupils. This is maybe why a Price Waterhouse Coopers report initiated by the government concluded that, “there is insufficient evidence to make a definitive judgement about academies as a model for school improvement”. Everyone knows that a good headmaster coupled with selected investment is the key.

There has always been a feeling that the driver behind the Academies programme is the privatisation of community schools at whatever cost. What is more galling is that both Oasis and Harris – the respective sponsors – are not obliged to pump any of their own money in as they already control other schools.

Most worryingly of all is the fact that both Labour and the Conservatives are pushing this programme of academies. This makes it open season in Croydon because thanks to an undemocratic electoral system those two parties make up the whole council.

Went to Blackheath on Friday 28.08.09 to experience my first Climate Camp. I guess not holding it at a specific protest location gives the event an outdoor conference air about it. Full marks everyone involved. 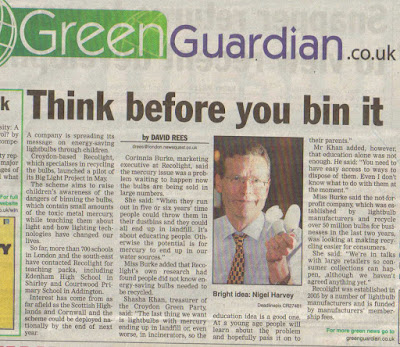 News of cost of Oasis Academy appears in the papers

Following the press release being sent, the Croydon Advertiser tells readers just how much has been spent on academisation so far in Croydon. This does not include Croydon councils' own costs.
Croydon Save Our Schools are still waiting for that figure.

OVER £1MILLION SPENT TO CHANGE STATUS OF ASHBURTON TO AN ACADEMY 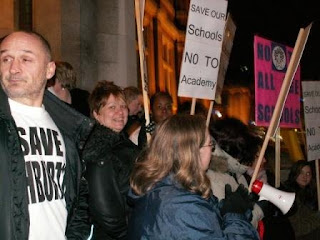 OVER £1MILLION SPENT TO CHANGE STATUS OF ASHBURTON TO AN ACADEMY.

Croydon Save Our Schools have obtained under the Freedom of Information Act the interim costs of changing the Ashburton schools into an academy. (1). These include the feasibility of the proposal, legal and consultative related tasks plus project management fees. The bill presently stands at £1,058,899.

This follows the earlier revelation that the bill for changing Haling Manor’s status to Academy is presently running at £981,666. The true cost may well exceed this figure.

“Tax payers need to be aware that over £2million of DCSF (3) money has already been spent on changing the status of these schools and we’re still waiting for Croydon Council’s own expenditure. There has always been a feeling that the driver behind the Academies programme is the privatisation of community schools at whatever cost.

“It’s awful to think that this money could have been spent on classroom support assistants, extra learning mentors, Saturday homework clubs and the like. The councils’ mantra was that that these schools were failing but little consideration was given to the pupils that went to these schools with special education needs. £1 million would have gone a long way in giving the necessary support.”

1) A copy of the disclosure letter is available on request.
2) Shasha Khan is a co founder of Croydon Save Our Schools and Green Party Parliamentary candidate for Croydon North
3) Department of Children, Schools and Families. This money doesn’t even consider DSCF staff costs.