EU or not to EU by the sons of immigrants.

I haven't had a chance to blog for a while but with the looming EU referendum, now just 2 days away, I felt I had to put a different perspective on what is billed as the 'once in generation vote.'

I remember vividly the first time I heard an Asian gentleman call up a radio station (LBC), during a phone in, to moan about immigrants coming in. It was all the more bizarre because he had a fairly strong accent. The presenter responded by quoting the lifting of drawbridge adage but that didn't seem to matter to the caller.

I have had many conversations about the EU vote with friends. The most fascinating conversations are with my Black and Minority Ethnic friends. We are all Londoners in our mid-40s, sons of immigrants, but also of an age to notice the relatively sudden change in the population demographics around us.

Anyway, I thought I would collate their thoughts in this blog:

Mr Saleh is voting REMAIN. When we last spoke about the vote, around a month ago, he was convinced that LEAVE wouldn't have a chance. His logic was that people in this country wouldn't vote for a self-imposed economic crash.

Mr Saleh returned to the UK this year after living and working in Dubai for around 17 years, although he has been back to visit on a number of occasions because his mum and dad are still living in London. He told me about walking down Oxford Street recently, and how he didn't hear a single English voice. Everyone was speaking in a foreign tongue. Everyone working in the shops and cafes didn't speak English as a first language. I noticed Mr Saleh posted the meme below on his FB timeline.

We talked about the impact of immigration and how the job market had become very competitive. It was clear to Mr Saleh that we were on the edge of another economic crash. He understood the global economy to be fragile and the repercussions of a BREXIT would make things a lot worse. I played devils advocate, and pointed out we were the the world's 5th largest economy. He replied that we were the 5th largest economy because we were in the EU.

I think during one conversation with Mr Nu I gleaned that he was very much a global citizen and as such the free movement of workers from the EU was limiting opportunities for Commonwealth citizens.

He sent me a message via Facebook last week:

"The economy seems to have flat-lined or be in stagnation. Young people in Italy, Portugal, Greece and Spain are coming to the UK as the EU project has not created employment opportunities. Where there is economic growth in developed economies, the companies are able to shelter their profits through tax shelters and thus the public purse does not increase, hence we have had economic growth without the treasury being able to pay off the public debt.

It strikes me that this model of economics, supported by the IMF, World Bank and major Central Banks is not working. The impact on the rest of the world is dire with most developing countries unable to make any development as they cannot invest in their infrastructure and the creation of a functioning state  as their income goes on debt repayments at staggering rates of interest (or stolen by corrupt regimes).

It strikes me that whether we stay in or out of the EU is not actually the issue. The issue is can anyone change economic policy which creates economic growth, which isn't squirreled away by large companies, to enable politicians to build more robust states. We saw Greece propose this, by voting in a party which would take them out of the Euro to enable them to print their own money and democracy was suspended in that country."

Mr Anenden and I spoke about the EU a few days after Green Party peer Jenny Jones appeared on Question Time. She self-described herself as a rebel within the Green party when explaining she was in favour of BREXIT. She made it clear that immigration was not a consideration when arriving at her decision. Instead the simple fact that the EU is unreformable has brought her to the gates of BREXIT.

This is why Mr Anenden intends to vote LEAVE. He pointed out that if he wanted to vote out the government of the day in the UK he actually could do this. However, with the EU, he has no chance of voting out someone or some group if they decided to impose a policy he disliked.

Mr Anenden posted on Facebook, "Yes I am voting BREXIT, howvever, I am fully aware of how poisonous the debate has been especially about immigrants. Luckily I am educated enough to discard that bullshit. Growing up in the 70s and 80s I was abused verbally and physically for being a Paki (even though my parents came from Mauritius)."

Mr Srinivason has already voted REMAIN by postal vote. He pointed out to me in an email that, "the arguments put forward by the BREXIT camp just do not make sense to me and are not as persuasive or as rigorous as the case for staying in."

The economic arguments for staying in are important to Mr Srinivason but personalities are also playing a part for many when coming to their decision.

In his email Mr Srinivason said:

"One of the leading campaigners of the 'Out' campaign is Boris Johnson. On a purely personal level I cannot stand him and do not think he has any political intelligence. His persona of a 'harmless, lovable rogue' maybe enough to get him votes among some people but it doesn't work with me. Anything Boris puts his support is very, very unlikely to get my vote."

In addition, he points out, "I think we need to move away from an island nation mentality that people in the UK traditionally have. Many people still believe in British sovereignty  and that we are at battle with the Germans and French. I personally think we need to embrace Europe and have stronger links with them."

A few months ago when I spoke to Mr Macey about the referendum, like Mr Saleh, he said BREXIT wasn't going to happen. When I saw him again last week, he reminded me that I told him not to presume it was a foregone conclusion. Quite crudely, if you add half the Conservative vote to the UKIP vote, and a third of the Labour vote - then you've already got 40 per cent. What is more, this 40 per cent is definitely voting on 23rd June.

When we recently met, Mr Macey told me:

"I think there is a discussion to be had on whether the EU is beneficial. Unfortunately, the context of this referendum is one which will see us led out of Europe by extreme right wing ideology. These are people who would create more wealth for the already wealthy, who won't take care of those who need it, and who won't connect to people who really don't have a stake in their future."

My own view - REMAIN

Back in 2006, whilst on a trip to Belgium I was lucky enough to be shown around the European Parliament by long serving Green party MEP for London, Jean Lambert. A couple of years later I stood for the European Parliament. It would be a bit rich to stand for parliament that I didn't want, although this doesn't seem to bother the elected UKIP MEPs.

My reasons for remaining have been succinctly given by my friends. My lingering doubts about the EU have also been captured by my friends.  I don't consider myself enthusiastic about remaining. I did the Crowdpac test and scored 62 per cent in favour of remaining - which feels about right. 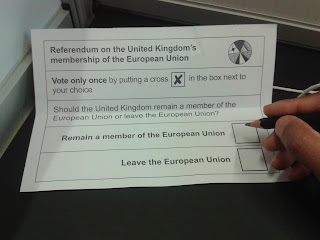 It is human nature to recall some halcyon time when housing was affordable, jobs were available and commuting was navigable without congestion or frustration. This halcyon time is somewhere in between the UK being labelled the 'sick man of Europe' in the 1970s and Gordon Brown's continued pronouncements of 'no return to the boom-bust economy' in the 2000s.

Successful economies attract migrants and need migrants to sustain their success when ailing. Government policy needs to meet the demands of continued migration. However, Mr Nu explains why this is not happening. The result of this inequality, lack of housing and public service provision combined with a right wing media keen to distract from its own wealth directs focus on the immigrant community. My friends/contributors and I have all experienced the prejudice that results.

One final thought, when states at different points of the economic cycle try and unify, it is undoubtedly easier if they have a common language. USA, Germany (twice), Italy and even the United Kingdom come to mind. Maybe its time to introduce Esperanto in all schools!