This is a pilot scheme and if successful, will continue every Saturday and Sunday.
- IMPROVE & GAIN CONFIDENCE
- CYCLING ON THE ROAD & PLAYGROUND
- CYCLING WITH CHILDREN TO SCHOOL, ETC.
- CHILDREN UNDER 8 MUST BE ACCOMPANIED
- CYCLE CHECK & MINOR REPAIRS WITH Dr BIKE

Instructor-led ride for one hour at end of the session. Adults and
accompanied children only.
Limited places. You may book on 079040 21944 / or otherwise just turn up.

The flash floods in Croydon during July may well be a tiny taster of the chaos that lies ahead. The governments’ own Chief Scientific Officer, Sir David King, pointed out that the flash floods across England were predicted in climate change projections back in 2004. One could argue that it is too early to say with conviction whether the flash floods are just a ‘flash in the pan’ because floods of this kind do occur as was the case in 1912 and 1947.

However, extreme weather is consistent with global warming and July’s rainfall is the highest since 1766. If you marry that with the fact that: ten of the last 12 years have been the hottest on record then it is clear that something out of the ordinary is occurring.

That is why I was very interested to read Cllr Tony Newman’s rather rich letter regarding the exposure, by a Conservative councillor, that members of the Conservative-run council do not believe climate change is happening or is even is an issue they should take seriously.
You see on the one hand we’ve got the Labour group who, when in power, portrayed a semblance of awareness of the issue but did scant little locally; on the other, we’ve got a Conservative group who ostensibly, won’t believe the overwhelming evidence before them and consequently are not going to do anything about it. I don’t know what is worse!

Labour and Conservative MP’s and councillors must never forget that the Stern Report, commissioned by Gordon Brown, highlighted how failure to act on climate change would trigger a catastrophic global recession. 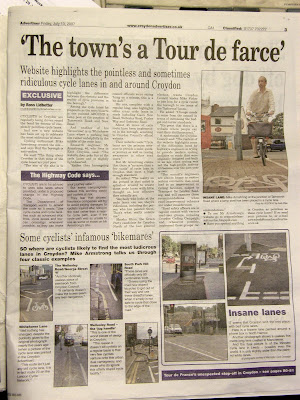 The piece came about as a result of Shasha Khan's letter about cycle lanes.

Pictures from our stall on Saturday. 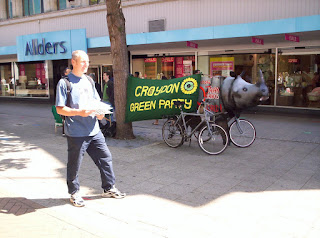 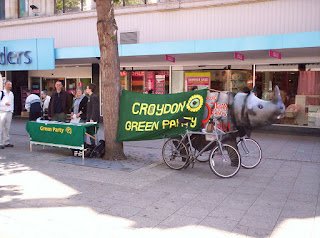 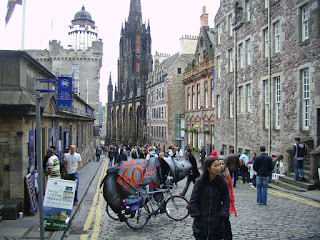 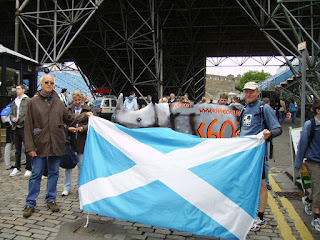 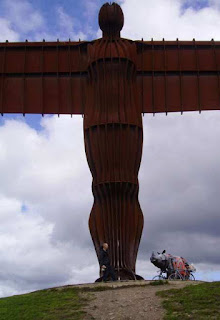 Croydon Green Party member Andy Lindsay has finally returned from his epic two week journey from Croydon to Edinburgh on his Rhinocycle. During the journey he had to cope with some of the worst weather conditions locals could remember when riding through northern England. On one day he rode through the rain for two days solid. However, his efforts have raised to date over £1000 for specific Javan and Sumatran rhino projects run by Save the Rhino International and also massive amounts of awareness for rhinos.
Upon returning to London, Andy Lindsay said:
"Although the bike was designed for two riders, I was on my own for most of the journey and driving rain, headwinds and hills made it all the more challenging. I received fantastic help and encouragement along the way including donations, food and free accommodation."

Andy Lindsay noted that the journey was a light hearted approach to a serious issue and was keen to point out that:
"Javan Rhinos have been brought to the edge of extinction (there are now fewer than 60 left in the world) by poaching for their horn and as a direct result of rainforest destruction. By riding Rhinocycle007 from London to Edinburgh I hoped to make as many people as possible aware that these and many more of our fellow creatures are going extinct as a direct result of our actions. We cannot continue to pollute our planet while destroying our rainforest without unleashing severe climate change. It’s like burning the candle at both ends…with a flamethrower! "
People can still donate at http://www.rhinocycle007.org/

Andy Lindsay in the local paper 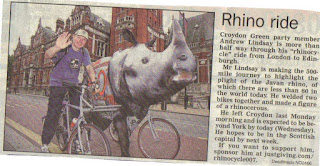 Letter to the local papers

I hope Tory Council leader, Mike Fisher, attended one of the Bike Week events (16th-24th June) in Croydon. After all, his party leader, David Cameron MP, is forever trying to portray his party’s green credentials. Mr Cameron even cycles to work for that crucial photo opportunity! By the way, we are encouraged to dismiss the fact that his official car is carrying his shoes and his briefcase in tow. This exposes the level of hypocrisy and greenwash the main three parties peddle – no pun intended.

So how much does Mr Fisher buy into his party leaders’ supposed green enlightenment? The answer is ‘not very’ if you look at the amount of investment on cycle routes in Croydon
In London around 2% of journeys are by cycle. Yet cyclists represent 8% of road users who are killed or seriously injured. Cyclists and also pedestrians in Croydon are all too aware of the perilous roads in the borough. One cyclist has started a blog called ‘Crap Cycle Lanes in Croydon’.

On the one hand we are all being encouraged to “get on our bikes” but this Conservative Council has failed to put its money where its mouth is.

I contacted the council about an accident waiting to happen on the junction between St James Park and Windmill Road, which is part of the London Cycle Network. It is a two way street for cyclists but one way for motor vehicles with a glaring blind spot where cyclists approaching Windmill Road cannot be seen. The council officer came to view the road layout and was quick to acknowledge the danger. However, 6 months later nothing has been done. Moreover, I was told when I called to chase up my enquiry that there were many other urgent cycle route corrections which have not been carried out. One can deduce that it is the usual reason -‘cuts!’

Cycling in Croydon is fraught with danger. It is essential the council leader is fully aware of this. That is why I have written to Mr Fisher asking him to join me on a cycle ride around Croydon. Only then will he realise the risks cyclists have to endure.